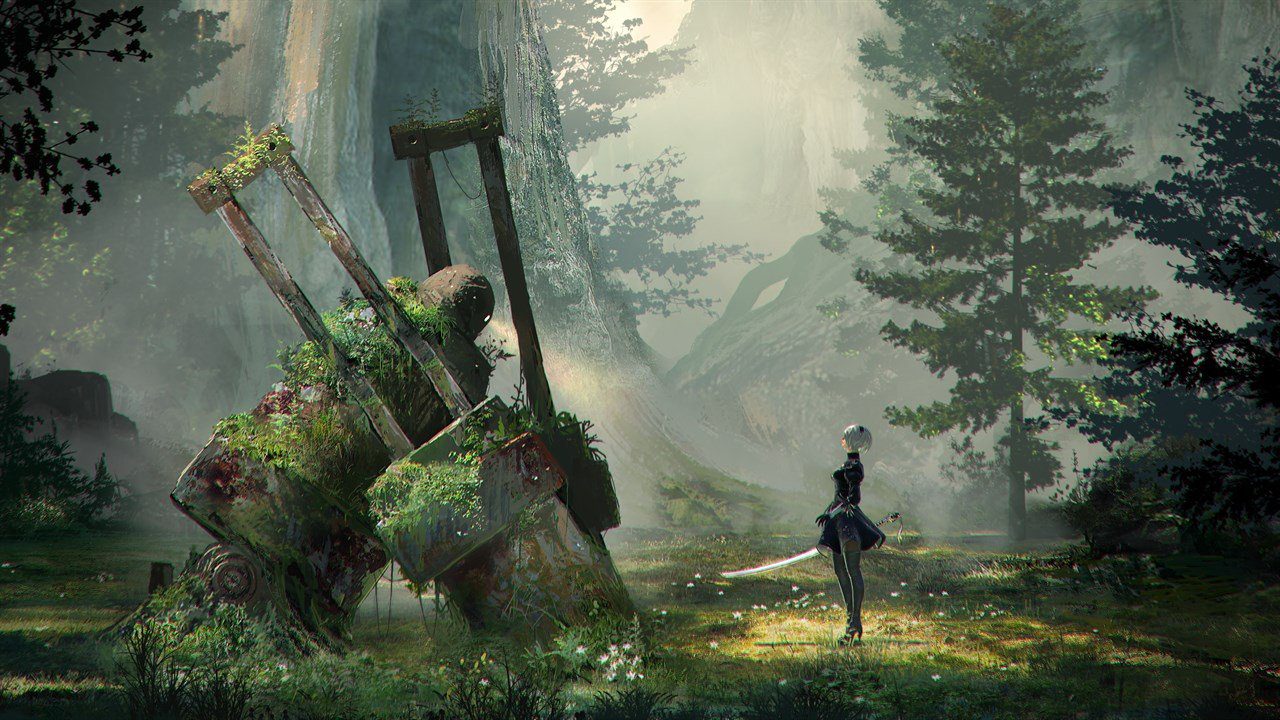 While he was once known as “The Drakengard Guy” ages ago, he’s now extremely in demand, overseeing multiple NieR universe titles and even collaborating with Square Enix on a constant basis. But a lot of people are about to get to know him better, as SINoAlice (a mobile game featuring fairy tale characters who fight to resurrect their authors) is on the verge of its release this month.

We got the chance to chat with Yoshinari Fujimoto (producer), Shogo Maeda (producer) and Yoko Taro (director) regarding the western release of SINoAlice, sneaking in a few NieR questions along the way.

Digging right in, I wanted to get a sense of how successful SINoAlice has been in Japan, to get some background on why developer Pokelabo sought to bring this to the masses.

Fujimoto explains that SINoAlice “became explosively popular” after its July 2017 release, and although “things have settled down” in the third year, he calls it “the biggest guild vs. guild game app in Japan.” Maeda chimes in here, noting that it’s still ranking very highly in the app charts, and they would have liked the localization to come out last year while the iron was hotter: but had issues taking over publishing duties from Nexon.

There doesn’t seem to be any major differences between this localization and the Japanese version, which is great news for those of you who have been following along and didn’t want to miss out on a chunk of content. Maeda says that “updates will progress like they did for the Japanese version upon launch,” and that the team “will release some features earlier in the global version than they were in the Japanese version.”

Those features include the VIP mechanic, the guide system for new users, the Gran Colosseum League “and more.” I tried to get some insight into the gacha monetary system, to see if it would be altered at all for the western versions, but it looks like things are staying put, with Maeda explaining that “the gacha system is the same as the Japanese version.”

A huge part of the game is the incredible artwork, so all of the staff had to chime in with their favorite characters. Fujimoto says that they adore Alice, who they refer to as a “Yoko-style Alice.” Maeda agrees, stating that Alice was the first character designed by one of the lead artists (Jino). Taro gave us a very Taro answer: something that wasn’t in the game yet. ” In terms of story, I like Parrah and Noya’s the most. Well, that story hasn’t been released yet actually, so it’s just inside my head,” he said.

Shifting gears a second, Fujimoto was able to shed some light on how the free-to-play division of Square Enix has been evolving these past few years: “It’s grown a lot, but we have a lot to go in terms of making a mark globally. I think business models for games will continue to diversify in the future. While there will be multiple core models, I think free-to-play will be one of the standard core models in the world like it is for Japan.”

Remember all that aforementioned success I said Yoko Taro was enjoying? Well, I asked him to marinate on that a bit, wondering out loud if he ever saw himself going from Drakengard to this little NieR empire of his. He muses, “I’m very thankful that SINoALICE became a hit, thanks to Automata suddenly becoming a hit unexpectedly. While the illusion that Yoko cranks out hit titles is still alive, I’d like to make lots of cheap-looking games, sell them off for high prices, and save all the money to live off of for the rest of my life.”

While Taro declined to comment on the impact that Square Enix’s Final Fantasy x NieRi collaboration has had on his work, he did give us some insight into how he views the NieR universe as a whole. I wanted to get some background on how he saw the entire universe in his head; to see if he has trepidations with handing his baby off to someone else.

His response was fascinating: “It’s not so much that I’m protective, it’s just a hassle to explain the settings to others. Also, since I’m the author, I get to make up new settings or make changes.” Fair enough!

If you’re interested, you can play SINoALICE today on iOS and Android.