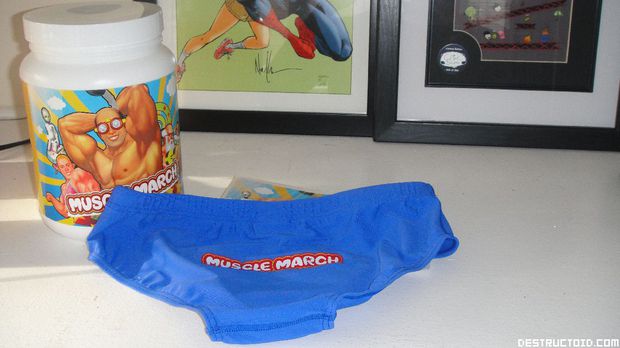 I’ve never played Namco Bandai’s WiiWare title Muscle March, so I don’t know if it’s a good game or not. But here’s the game’s “story,” according to the publisher:

“The all mighty protein powder has been stolen so it’s up to Tony and his mustlce-bound crew to catch the thieves… as each thief attempts their escape, they will smash through walls while making a variety of poses. You must match these poses to fit through the holes and catch up to the thieves. The protein powder will be yours again.”

Well, okay, I’ll buy that. Sure, why not? To promote the game, Namco Bandai sent over a mock protein powder canister with a Muscle March Wii-skin and branded swim trunks in it. What am I going to do with this stuff? Nothing. But I want to give it away.

(Warning: What I’m about to write is the worst idea I’ve ever come up with.) Here’s how this will work: I’ll send the shorts and the skin to the first person to a) take a picture of themselves in tighty-whities and post it in the comments, and b) agree to take a picture of themselves in the Muscle March shorts so we can post it on Destructoid. Contest is open to both males and females over the age of 17.