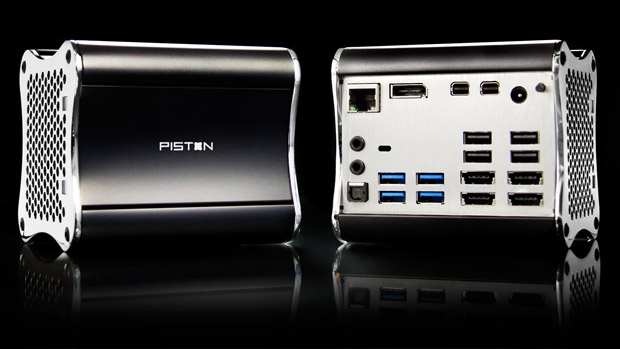 A thousand bucks gets you … this?

Long before Valve started talking about its plans for Steam Machines — living-room PCs that will be made by various unnamed manufacturers and run SteamOS — there was the Piston. This $1,000 PC by Xi3 garnered a lot of attention as a so-called “Steam Box,” though Valve went on to eventually distance itself from the company. The Piston is back, and it’s still expensive.

Re-revealed today with a November 29 launch date, this small-scale PC sports a 3.2 Ghz quad-core processor (the R464), 8 GB of DDR3 RAM, and a 128 GB SSD. In an FAQ, Xi3 writes that “[Piston] owners will be able to access and play games on/through Steam since it is a Web-based platform open to anyone with an Internet connection and a Steam account, either on a Windows- or a Linux-based system. So in this regard, Piston could be considered the first commercially available Steam Box.”

As for out-of-the-box SteamOS support, that’s “a bit premature to answer,” says Xi3. “[A]ccording to the SteamOS announcement page, the SteamOS will ‘…run on any living room machine.’ Therefore, SteamOS should be able to run on Piston Consoles (PCs) as well, but we’ll have to wait until SteamOS is available to confirm this.” Okay then. Let’s hope that the PCs releasing as “Steam Machines” will offer more value for the price.