Over/under on first week in Japan is 150

Finally we have some hard data on Microsoft’s Project Scorpio, a more powerful version of the Xbox One. Digital Foundry reports that the system will be able to run games in 4Kresolution at 60 frames per second and feature eight custom x86 cores clocked at 2.3GHz, a GPU with 40 customized Radeon compute units at 1172MHz, 12GB GDDR5 memory, 326 GB/s of memory bandwidth, and a 4K UHD Blu-ray drive.

Scorpio will of course employ HDR, and if you don’t have a 4K television then the games will down-sample to 1080p. Additionally they have moved to Direct3D 12 for API, will use HDMI 2.0 for output, and added support for Dolby Atmos. All games on Xbox One will be compatible and will enjoy technical improvements such as more stable frame-rates, no screen-tearing, maximum possible resolution, improved texture filtering, and faster loading.

Inside the next Xbox: Project Scorpio tech revealed [Eurogamer] 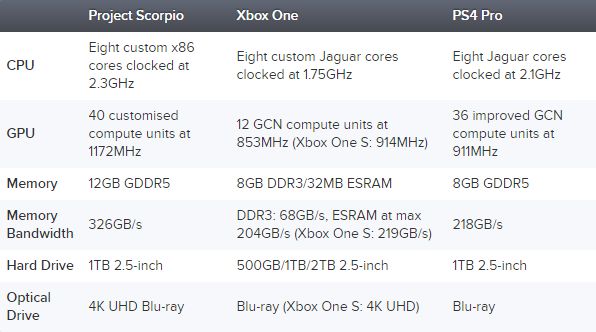