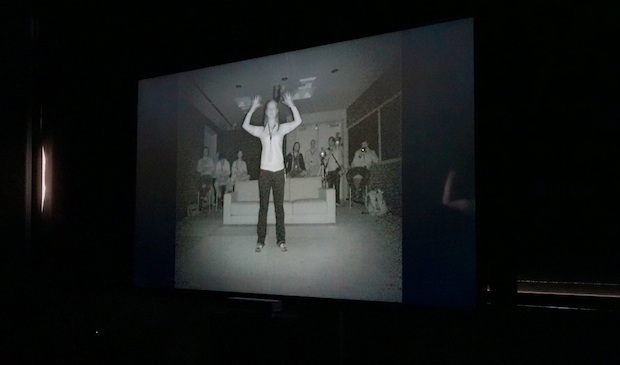 And so much more

I’ve just participated in a demonstration of the abilities of Xbox One’s Kinect and I have to say that I’m impressed. This little bar can do amazing things. We won’t bore you with the technical details, but their combined powers let the Kinect do things like see your skeleton and muscle movement. Jump, stomp your feet, or swing your arms, and the system sees the force behind your movements. It seems to see everything, and without any noticeable lag.

It’s ability to see depth is pretty amazing too. Testing it out, we were able to walk up close to the sensor, and in the depth maps you could pick out individual buttons on a shirt. Fingers? No problem. The Kinect tech lets it see the orientation of your hands via your thumbs, so spinning your hands around can be used as a play or control method.

Seeing skeletal representations of anyone that walked in front of the sensor instantly showed how this new Kinect is much more capable than its predecessor. It can ‘see’ six people, Microsoft says. I believe them as I watched five dance around in front of the screen this afternoon here at Microsoft HQ.

The Kinect’s ability to see is so sensitive that it can monitor your heartrate just by seeing your face. Microsoft says that it uses clues like the color of your skin to hone in on a number, and they claim it to be accurate within two beats per minute.

The camera is tuned to even see and recognize the faces of users. Watching people walk in front of the sensor, the system generated profiles immediately, and then recalled a name if they were in the system. It could even ‘see’ each user’s mood, with indicators showing smiles and talking state. It didn’t miss a beat, even with several people moving around in the room.

And if all of this wasn’t enough, the Kinect for Xbox One can even see in the dark. We did a full lights-out test — no light in the room at all — and it had no problem perfectly tracking a subject’s movements.

We have yet to see this new Kinect tech in action in a game, but from the tech demonstrations we’ve seen it’s clear that huge strides have been made over its predecessor. I can’t wait to try this out.