Watch TV in a new way

You probably won’t buy an Xbox One to watch television, but television watching seems to be pretty neat with all the integration and applications Microsoft have worked into their new console.

They want you to always have your Xbox One on, and they want you to never have to change inputs on your television. Microsoft put a HDMI passthru port on the Xbox One so that television watching is a seamless part of the system.

There’s no escaping it. You’re going to want to watch TV on your Xbox One. If you like TV, that is. 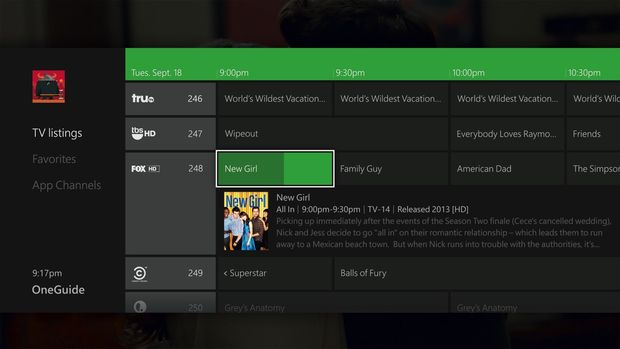 TV is waiting for you to watch it:

That HDMI passthru port has a television signal continually streaming into the Xbox One, waiting for you to watch it. Simply call out that you’d like to watch television and the Kinect will understand you, instantly pulling up the feed from your cable box.

Your wish is Kinect’s command:

You won’t need a remote control to control your television with Xbox One. Voice commands let you do everything from turning up the volume to changing channels. You can simply call out the name of the network or program you’d like to watch if you’d like.

This works because the Kinect sensor doubles as a massive IR device that blasts out infrared codes to every corner of the room. The signals bounce off walls and return to the devices in the room, even if they’re in shelves or behind glass. This lets users completely do away with remote controls.

Upon initial setup, Xbox One’s system looks up your components in an online database and plugs in their respective command data. The Xbox One does all the heavy lifting, taking your voice command and translating it to IR that your devices can understand.

Channel and content surfing becomes even easier with the One Guide app. It looks like your standard DVR/cable box channel guide at first glance, but all of its functions can be navigated via voice. Numbers, channel names, program names and more work as valid commands. Users can ask Kinect “What’s on Discovery?” to see its listings, and then say “Watch this channel” to tune to it, for example.

Beyond television listings, One Guide also lists programming from other apps and services, letting you navigate streaming content alongside television listings. For example, Hulu Plus has app channels for popular shows and movies. Even non-video applications can be saved as an app channel. We saw an example where a photo gallery in Microsoft’s Sky Drive was saved as a channel. Selecting it in One Guide lets it act like a channel of programming, showing a slide show of the photos.

The experience can’t be 100 percent hands free, though. Basic commands, like transport control, channel changing,  and the like, will all be available via voice controls. You will  have to dig the remotes out for deeper control of your DVR and cable box, though. 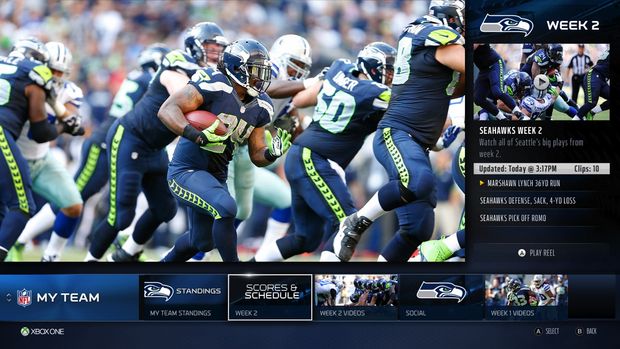 Of course, you can choose to filter these notifications or shut them off completely. But fellow internet addicts will enjoy Xbox One’s snap feature, which lets you pin just about any app to the right side of the screen.

Xbox One’s notification feed app will keep you connected while you watch your crap syndicated reruns. I’m going to use Twitter while I watch reality cooking shows. You can search for hot pictures of Kari Byron in a snapped Internet Explorer app while watching MythBusters if you’d like. Snapping will be a game changer for television watchers with an internet problem.

Sports fans are going to freak out:

I’m not a sports fan. At all. But even I was extremely impressed with Xbox One’s NFL app. Through Microsoft’s partnership with the NFL, exclusive content is available for users through this app. Highlights are constantly being pushed to the servers from the NFL, and are instantly available in the app on Xbox One.

Sports nuts will enjoy snapping the NFL app while watching television, letting them watch one game while keeping track of others. The app keeps track of your favorites as well as highlights from around the league. Users could watch games live while tracking how plays impact their fantasy league in real time in the NFL app.

I’m not much of a television watcher, so I don’t expect to use a lot of this. But the level of integration is impressive enough that I expect that Xbox One will change the way a lot of people watch television. If Microsoft is still out to own the living room, the TV integration for Xbox One is a big step toward that.