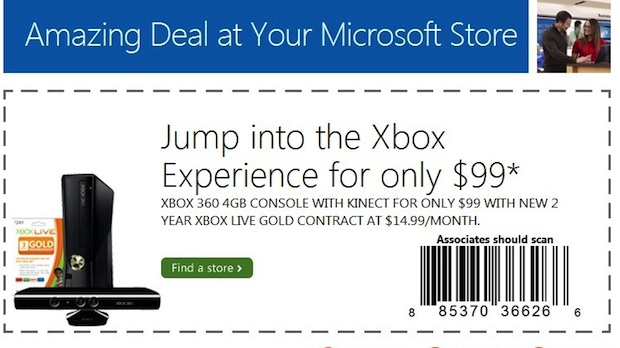 Subscription could be used for future Xbox

The mobile phone-style Xbox 360 / Xbox Live subscription that Microsoft tried out earlier this year in some of their own stores must have worked well for them as they’re now expanding the program to other retailers.

WSJ says that the $99 4GB Xbox 360 and Kinect bundle that required a 2-year subscription (with $14.99 a month payments) to Xbox Live will also be available in Walmart, Toys ‘R’ Us, and GameStop stores in the coming weeks.

Gamasutra says that a new subscription types, like a 250GB hard drive system for $99, and a bundle with a Kinect for $149, will also be made available.

“This type of program is pivotal to our business,” he said to the Wall Street Journal.