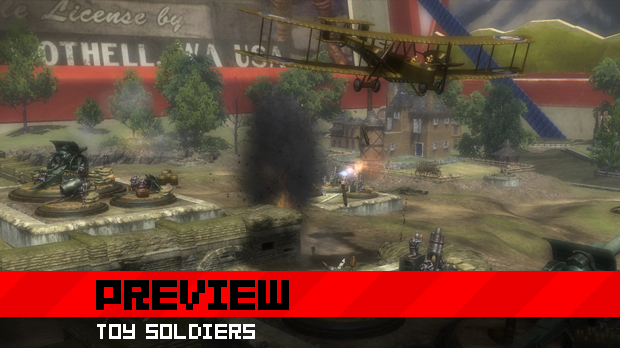 March 3 is going to be a pretty exciting day for those who are into videogames. Microsoft has some interesting spring plans with Block Party, a sort of Summer of Arcade for the equinoctial crowd. Kicking things off on March 3 is Toy Soldiers, an interesting mash-up of many different genres, coupled with the often ignored WWI time period. While not much has previously been known about the title, developer Signal Studios is aiming for a pretty original new title.

Hit the jump for my hands on.

Toy Soldiers is a WWI-esque strategy game that Microsoft labels under the “Intense Action” genre. Genre specifics aside, the game looks pretty cool, with large levels evoking the trenches of war and the battlefields of Europe. However, since these units are all toys, off in the background can be found doors, desks, tables and lamps, reducing the scale of the battles to something that much smaller. There is a nice charm at play here, and everything is designed to look from just this period.

The biggest impression I got from Toy Soldiers is that it covers a whole lot of gameplay genres, but each of those elements look like they are coming together nicely. Primarily is the tower defense portion of the game. Most of the units you can buy can only be placed on predetermined spots on the field. Some spots are large and can place all of the unit types, from massive cannons to machine guns. Some spots are smaller, only capable of holding smaller units like anti-air guns.

The game can be played entirely this way, especially on easy, with the player focusing entirely on placing units, rebuilding them, and upgrading them as money comes in from defeating enemies. While that is a fine for the most part, as units will take care of themselves, it’s going hands-on that it more fun.

So say you’ve got your units stocked and upgraded, surrounded with barbed wire to make sure they last, what do you do? Well, every single unit that you control can be played from their perspective. So if the enemy team is dive bombing you with planes, hop in control of the anti-air guns, and shoot them down. Or even better, get in control of the red biplane just begging to be played, and shoot down the opposing side’s incoming calvary. It’s enjoyable to go from a tower defense style game to actually playing the units. Each unit type plays entirely different, and it mixes up the gameplay entirely.

One of the most interesting elements with Toy Soldiers is the cross promotion with Facebook. That game is called Toy Soldiers: Match Defense, and players will be able to play that right now. Apparently  the two games are not going to synch up in any crazy manner, but if you have the Facebook game, expect some buffs in the XBLA title. In application, it doesn’t seem like much, but could be a sign of much more exciting things in the future.