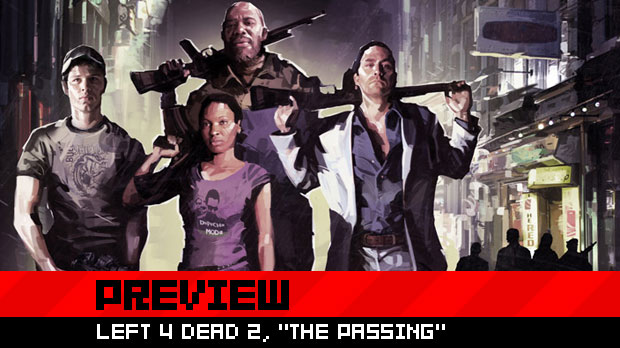 If you paid attention to all the X10 news that broke out yesterday, you’d notice Left 4 Dead (both of them!) is receiving all sorts of new updates. Between a comic book, an awesome-sounding return to the original game with new downloadable content, and “The Passing” for Left 4 Dead 2, there is a ton of Left 4 Dead content coming out by April.

From all of my talking with Valve representatives, expect Left 4 Dead to live on in this manner, with DLC and patches. I can confirm that Left 4 Dead 3 will not be announced at all this year, for which fans of online petitions are surely disappointed. Anyhow, I was a lucky enough duck to play through the second chapter of Left 4 Dead 2 DLC “The Passing,” called  “Underground.” It’s a dark area, and while I didn’t see the return of the old crew, I got some nice hands on with what we can expect next month.

Hit the jump for more details on this brand new campaign.

“The Passing” is an interesting campaign that stands out from others in that it’s only three chapters long. But make no mistake, Valve’s packed quite a bit in “The Passing.”

It takes place in a sort of bordello urban area, with lots of dark red-light-esque den of delights. I’m reminded of New Orleans right after Katrina, where the city itself feels the effects of the land, with mud and decay everywhere. In a way, this return to a darker, slightly more urban area, feels a lot like the experience of the original Left 4 Dead. It’s weird, but personally I felt like I was going back to that original game, and I really enjoyed it more than I had with the daylight-infused sequel’s original levels.

Now, “The Passing” takes place right after Left 4 Dead 2‘s “Dead Center” and before that title’s “Dark Carnival.” The sweet race car that was snagged at the end of “Dead Center” has hit a snag, and so the three chapters that follow entail getting that machine past a tough series of obstacles. I was told that the returning original cast will be helping out, making sure Nick, Ellis, Rochelle, and Coach will be moving along just fine.

Now, I have to say that “The Passing” introduces what will be my new favorite zombie — the Fallen Survivor. This rotten bucket of yuck will take one look at your redneck ass and high tail it out. Unfortunately, you’ll want to make sure he’s dead as soon as possible, as when you kill him he’s guaranteed to drop med kits, Molotovs, and more. He’s the zombie lover, not a fighter.

While I didn’t get a chance to play other versus modes with the DLC, I was promised they are fully supported. However, the exciting news is that there is going to be a brand new mode brought to the game. Of course, they wouldn’t exactly say what kind of mode it was, but we’re going to find out soon enough.

Fans of Left 4 Dead are going to eat “The Passing” up. It really feels like a return to the original, which is a nice deal for those who found Left 4 Dead 2‘s brand of zombie slaying slightly unpalatable. There’s some neat stuff to be had, and it is a nice introduction to what is going to make March and April the Months of Left 4 Dead.