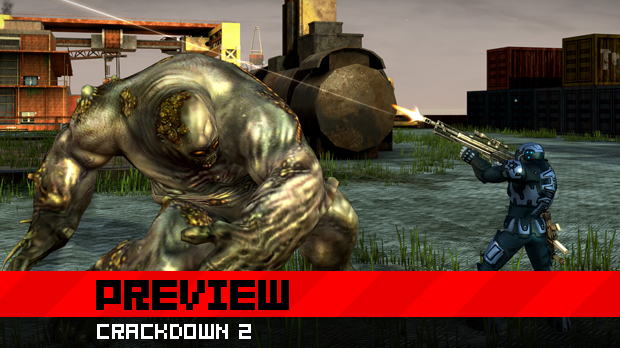 Looking at Crackdown 2, it’s pretty clear that developer Ruffian Games wants to make the game that much bigger and that much better than before. While that’s all grand and good, Crackdown 2 is really aiming to take what was once great and make it utterly fantastic.

While Crackdown 2 could be called “more of the same,” there are quite a few little details that were uncovered at X10 that should bring fans of the original back for more. From helicopters to zombie freaks, this isn’t exactly the game you played back in 2007.

Fans of the original Crackdown are going to find themselves right at home in Crackdown 2…literally. Plot-wise, the game is ten years after the original, and things have not gone so well for Pacific City. Buildings that once stood tall are now piles of rubble, and even worse, the zombie-esque Freaks from the first game have now taken over the city.

People wandering around are no longer a source of attacks, it’s these Freaks that will remain your biggest problem. The opposing group, Cell, is still around causing problems, but these Freaks will keep things complicated. Considering they may only come out at night, there is a new day/night dynamic to keep you on your toes.

So between these new primary enemies and a massive city in disrepair, there are some new vehicle options for the game. Helicopters can now take things to the skies, and they should offer new mission types for the game.

Also new is some of the suit technologies. For example, one suit you could wear will allow you to jump off buildings and glide around to the ground. It reminded me very much of Prototype‘s gliding elements, where a quick tap of the button will send your character into a slower, more controlled free fall. For fans of jumping off buildings in sandbox games, this’ll do.

Graphically, the game is even more good looking than before. The bold lines return, and everything looks great. However, the draw distances have been boosted even more. Fly up in a helicopter, and the whole city will be on view for you. When playing 4-player co-op, what was really stunning is that you can see these little pixels bouncing around and shooting stuff way off in the distance. Considering those are the other players, Ruffian Games has done a good job making sure the whole game works and looks well, especially for co-op.

Continuing with multiplayer, there is the 4-player co-op, as well as 16-player versus. Also added is a new party-system, which could be anything with regards to communication with other players.

Finally, those collectible orbs are making a triumphant return to Crackdown 2. This time, other than the static ones ready for you to jump around and find, there are new “Renegade Orbs” which provide a different challenge. One that I saw was racing around a dockyard, and the only way to collect it if I wanted was to be in a high speed race and grab it with my car. Expect all sorts of these types of dynamic Orbs to make collecting them all that more interesting.

By and large, I was impressed with what Ruffian Games has done here. It looks like the solid foundation of the original game has been great for this sequel. If Crackdown 2 is as much fun doing random things and boosting your skills, then there should be nothing to worry about when it launches later this year.