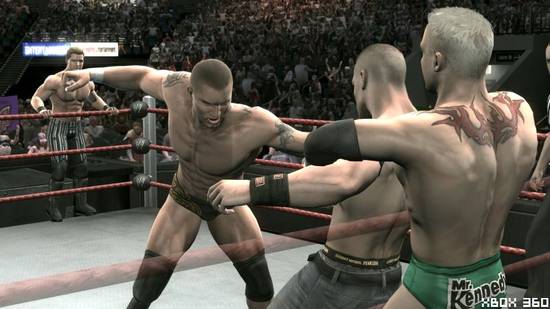 No surprises here, but I must relay the information that THQ have revealed the first information on WWE Smackdown vs. Raw 2009. This is the part where those of you who have nasty things to say about wrestling games go take a nap, because we get it — you don’t like them. Well, guess what? I do. So quiet down for a second.

As expected, WWE Smackdown vs. Raw 2009 will feature wrestling, and will be available for the Xbox 360, PlayStation 3, PlayStation 2, PlayStation Portable, Wii, Nintendo DS, and mobile devices this fall. Along with the expected roster updates this new iteration will be the first to feature downloadable content (Xbox 360 and PS3 only, presumably), a new emphasis on the tag-team experience, and a new “Create-A-Finisher” feature. The emphasis on tag-team ties right into the game’s new cooperative career mode, another first for the series.

The press release can be found after jump, and THQ have released some screenshots of the Xbox 360 and PlayStation 3 versions of the game to whet your appetites. I don’t mean to start anything, but am I the only one who can see a significant visual difference between the 360 and PS3 screens? Ouch.

The Number One Fighting Videogame Franchise Returns To The Virtual Ring With WWE® Smackdown® Vs. Raw® 2009

“The ambitious cross-platform launch of WWE SmackDown vs. Raw 2008 last year yielded tremendous growth for the franchise, as we delivered multiple gameplay experiences across seven platforms and greatly expanded our audience of WWE videogame fans,” said Bob Aniello, senior vice president, worldwide marketing, THQ. “With dynamic new features and the extension of our gameplay experience through downloadable content, WWE SmackDown vs. Raw 2009 will bring more console, handheld and wireless gamers together to enjoy the virtual world of WWE.”

“We are tremendously excited about the next groundbreaking release in the billion dollar WWE SmackDown vs. Raw videogame franchise,” said Nelo Lucich, vice president of interactive, JAKKS Pacific. “Downloadable content, innovative experiences with tag teams and a new Create-A-Finisher feature, along with significant annual improvements across all platforms, combine to bring the sports entertainment experience to new heights and gratify our long-time fans, casual gamers and franchise newcomers alike.”

WWE SmackDown vs. Raw 2009 upholds the franchise’s commitment to delivering the definitive videogame simulation of live WWE programming. The Xbox 360, PLAYSTATION 3 system, PlayStation 2 system and PSP system versions of the game will unleash a brand new tag team experience, allowing players to build momentum and attributes, eliminate opponents with high impact double teams and finishers, as well as get the “hot tag” for the win. The franchise’s renowned creation system offers a brand new Create-A-Finisher option, while a new Road to WrestleMania® Mode paves the way to WWE’s biggest event of the year and lets players experience co-op storylines for the first time. WWE SmackDown vs. Raw 2009 also extends the virtual WWE gameplay experience with robust online capabilities, including the highly anticipated debut of downloadable content.

WWE SmackDown vs. Raw 2009 for Wii builds upon its inaugural offering by significantly expanding its match type options, giving players more ways to enjoy the platform’s unique pick-up-and-play experience. The game also takes full combat sports entertainment to the next level by giving players more Superstar control with interactive entrances and victory scenes. WWE SmackDown vs. Raw 2009 for Wii will also include a wide variety of new weapons, the debut of online gameplay and much more.

WWE SmackDown vs. Raw 2009 for Nintendo DS returns with new gameplay controls that utilize the stylus and D-pad to deliver a compelling handheld fighting game experience. The redesigned Season Mode takes a role-playing approach, allowing players to interact with Superstars, upgrade their abilities and complete missions on a quest toward legendary goals. In addition, a larger Superstar roster, new match types and the inclusion of Create-A-Superstar will provide players with a variety of intriguing options to enhance gameplay.