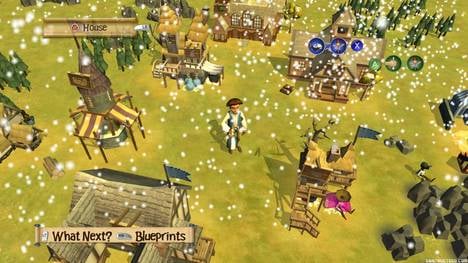 You may know developer NinjaBee as the folks behind Xbox LIVE Arcade titles like Band of Bugs, Outpost Kaloki X, Cloning Clyde, and the upcoming A Kingdom for Keflings. What you might not know is just what in the hell as Kefling is. Quite frankly, we were as lost as you … until now.

A Kingdom for Keflings is a light-hearted city-building sim that puts players in control of a giant who must design and construct cities for locals called Keflings. These Keflings can be used as helpers who will follow your every command, and can be trained to become lumberjacks, miners, transporters, and more

Players will build the city across four seasons, and can also play with up to four other giants cooperative over Xbox LIVE. A Kingdom for Keflings will hit XBLA this fall, which gives NinjaBee enough time to put in all of the village pillaging this game appears to lack.