With Battlefield: Bad Company 2 Vietnam out later this month, you will be ready to unleash hell on your enemies as 1960’s war jams like Creedence Clearwater Revival’s “Fortunate Son” fills your ears. Four brand new multiplayer maps will be available at launch, including a special fifth map that must first be unlocked by the community.

Like Battlefield 1943’s “Coral Sea” map, players on the Xbox 360, PlayStation 3 and PC versions of Vietnam will need to collectively amass 69 million team actions to unlock the fifth map called “Operation Hastings,” a remake of a map from the classic Battlefield: Vietnam. Team actions, for those of you that don’t know, are acts such as reviving a player, tagging enemies, healing others, dropping ammo resupplies and repairing vehicles. It’s awesome (yet, kind of sad) that for at least a week or so players will actually be nice and helpful to each other.

Having already played Bad Company 2, I can say for certain that players are definitely going to enjoy this expansion. 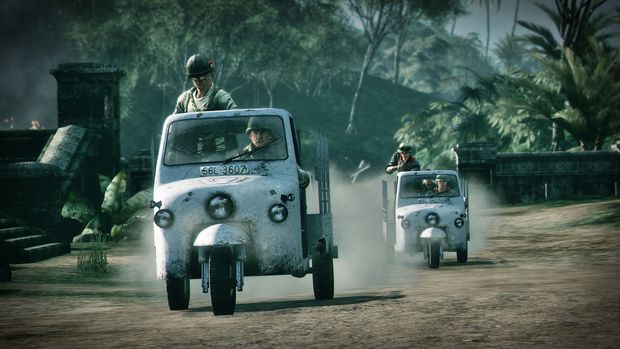 The weapons, vehicles, voices and everything is all new. As this is set in the 1960s, all the guns are completely different from Bad Company 2 as well. The art for the weapons were particularly striking to me as they showed signs of abuse, rust and some of the weapons are even held together with tape.

Jumping in straight from Bad Company 2 will feel a little awkward at first, but it shouldn’t take long getting used to the new weapons. Most players should be able to jump back and forth between the two titles with relative ease. In fact, your progression will carry over between Bad Company 2 and Vietnam.

Of the fifteen new weapons, I expect the majority of players will be taking advantage of the new flamethrower at first. This weapon is a beast, players won’t stand a chance against a direct hit. Flames stick to players and will slowly cook them unless they are healed or jump into the water. The flamethrower may also change how players attack or defend capture points in the Rush and Conquest modes. One round saw my team defending our last M-COM station. Three of us went with flamethrowers and covered each entryway, becoming an impenetrable force. 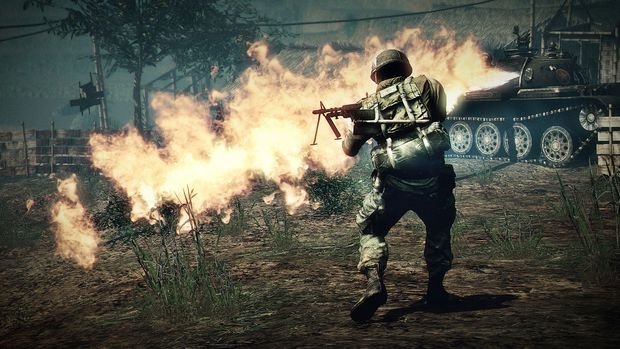 As we’ve come to expect from DICE and the Frostbite engine, all five of the new maps I played on were just gorgeous. Most notable of the bunch was “Hill 137” where you’re fighting on scorched earth with fires raging all around you. DICE is especially proud of the maps in Vietnam and according to the developer, they are some of the most balanced maps they’ve made yet.

So is the expansion going to be worth the purchase? Hell. Yes. Expansions in other FPS games usually just consist of a few extra maps. Here, you’re getting four (eventually five) maps, a whole new set of weapons and vehicles, and 10 Trophies/Achievements to boot. Even the intelligence reports before each round have been made to feel like they were from the Vietnam War. It’s the little things like that that just please me.