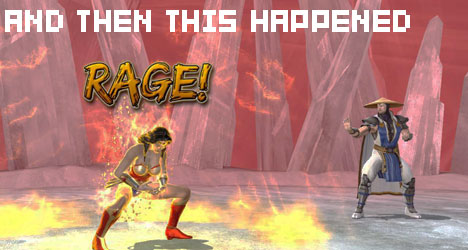 The release of Midway’s curious mash-up, Mortal Kombat vs. DC Universe is right around the corner, set to ship for the PlayStation 3 and Xbox 360 on November 16.

Midway is ramping up for its release by sending us some new screenshots that show off some of the game’s characters and new game mechanics. “Freefall Kombat” will allow players to battle it out while falling from one arena to the next, pummeling each other as they fly through the air. Klose Kombat is a brutal, face-to-face mechanic where success is based on anticipating your opponents button presses. Rage Mode is a mode that makes Wonder Woman squating like she’s ready to show you what she had for lunch, and appears to be a barrage of attacks.

We were skeptical at first, but surprised at how much fun we had playing Mortal Kombat vs. DC Universe at this year’s E3. It’s only a few weeks before we make the Joker smash Wonder Woman’s face in; we hope it’s worth the wait.