Wonder Woman is just what the DCEU needed. It’s been getting very good reviews, and it’s also been performing well at the global box office. As of this writing, it’s earned $240 million worldwide. It’s not stratospheric business (Suicide Squad outgrossed Wonder Woman in its opening weekend–let that sink in), but it’s still respectable and the film may have less of a second week drop-off than its fellow DCEU movies.

Box office isn’t the only metric that matters anyway. Wonder Woman‘s status as a game-changing blockbuster has a lot to do with what it means for the industry. It’s the first critically and financially successful superhero movie about a female character. It’s a major achievement for a female filmmaker, and a chance for Patty Jenkins to finally direct more films. (Jenkins’ only other directing credit was 2003’s critically acclaimed Monster–seriously, let that sink in.) It’s a star-making vehicle for Gal Gadot. It’s a movie that’ll get young girls into comics and genre fiction and filmmaking.

For the DCEU specifically, Wonder Woman offers what the other films have been lacking: a sense of hope. 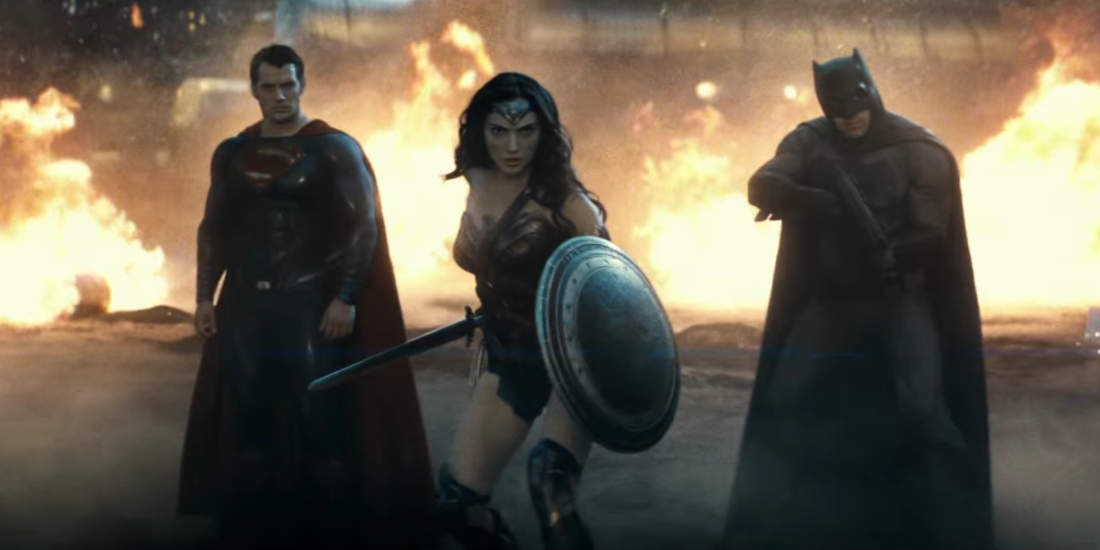 Up until Wonder Woman, the DCEU has been defined by oppressive brooding. Man of Steel featured a Superman hobbled by self-doubt for at least half of the story. Batman v Superman: Dawn of Justice was a clash between a sociopathic demi-god with daddy issues and a homicidal psychopath with mommy issues. Suicide Squad was a bad movie full of bad guys. No one seems to enjoy heroism in any of these movies. Except for Wonder Woman. As I mentioned last year, Wonder Woman was the only genuine hero in Batman v Superman. She leaps into battle with gusto and handles herself capably. She could have saved the day herself if Batman and Superman were such dumb meatheads.

Throughout Wonder Woman‘s origin story, Diana admires strength and bravery and being totally kick ass. She marvels at the Amazons as they spar, and she mimics their moves. Diana, throwing punches at the air, smiling on a hill–that was me at five-years-old standing on a coffee table watching Bruce Lee movies. I imagine that a bunch of kids, particularly girls, will also punch and kick along with Gadot on screen.

Her martial prowess is grounded in an unshakable sense of compassion and kindness. Her first time eating ice cream is a great comedic moment, but it’s also all about Diana’s ceaseless love. She’s so appreciative for the cone, she’s so gracious to the vendor–and yes, come to think of it, ice cream is pretty awesome the first time you ever eat it (and the 5,000th time, too). As she watches villagers besieged and in pain, her instinct is to help them rather than allow them to suffer; when she sees a horse being whipped, she thinks of a more humane way to treat animals. While Man of Steel shied away from collateral damage by keeping Superman and Zod battling through the skies, Wonder Woman is there in the mud, wandering through the murderous gas, like she’s a superhero working for some humanitarian NGO. 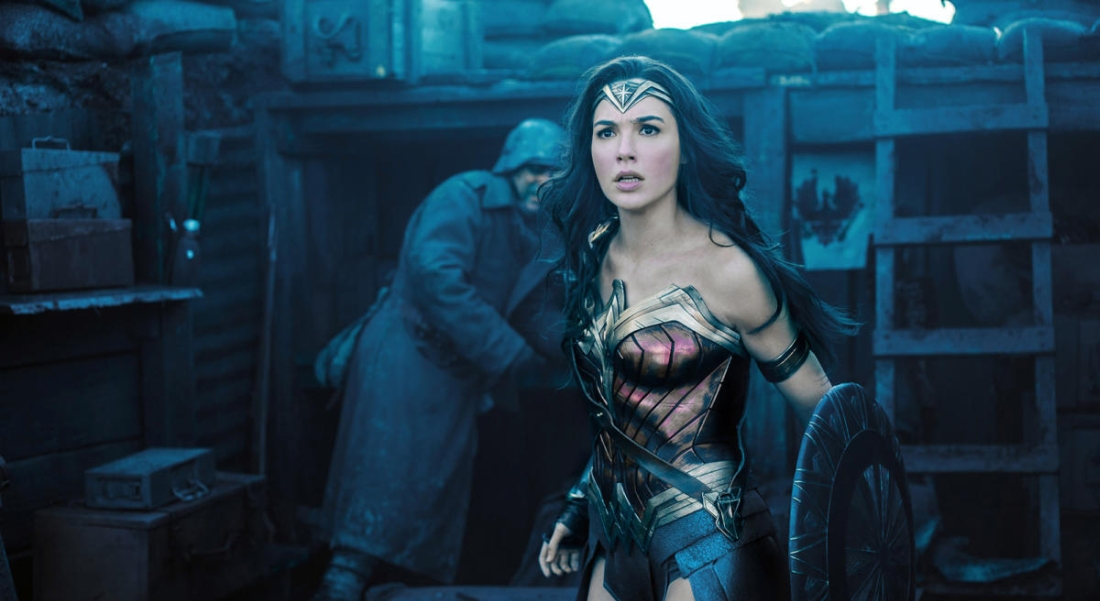 In the most memorable action scene in the film, Wonder Woman is the first one out of the trenches leading the charge into No Man’s Land. As she draws the machine gunfire and holds her ground, she’s the beacon of hope, an example for others to follow. She accepts this duty without any sense of guilt or doubt. She’s saving the day. Why do it begrudgingly. In the most absurd of wars, a moral light.

Wonder Woman always wanted to be a hero. She always is a hero. If there’s a moment of disenchantment in heroism, it’s not because she’s a dark and brooding figure unsure of herself and her powers. Rather, it’s when she realizes that humanity excels at reckless murder. It’s a philosophical crisis rather than a psychological crisis, which is fitting for a mythic character’s dilemma. A worldview is questioned, so what’s the response? To keep fighting for your ideals. Love, valor, ice cream–nevertheless, she persisted.

In addition to the hope and unabashed heroism, Wonder Woman is the most competently made DCEU movie. The colorful utopian idyll of Themyscira serves as a counterpoint to a morally gray Europe during the first World War. The screenplay may not reinvent the superhero movie or the superhero origin story, but it covers that well-trod ground briskly and with humor. Jenkins lets the camera linger on Diana’s face a little longer as she reacts to people and the world around her; Gadot’s subtle facial expressions offer an unexpected depth to the performance that isn’t present in the other DCEU movies. There’s not much going on in the heads of Batman and Superman that a scream or a grunt won’t convey, but Wonder Woman has an internal life. 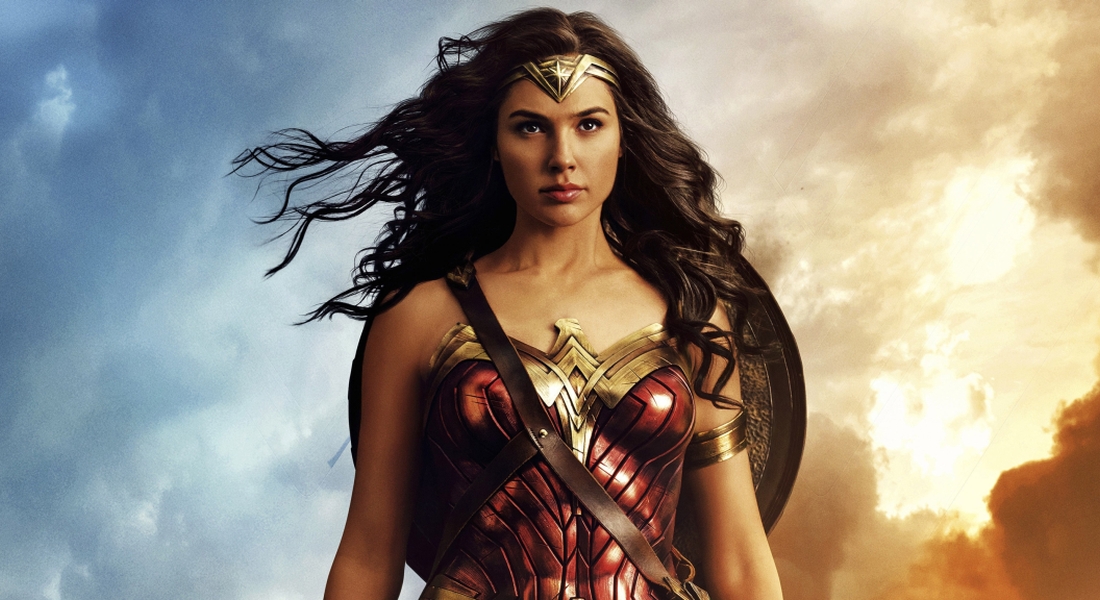 Jenkins’ filmmaking adds some allure to the otherwise rote romance that develops between Steve Trevor (Chris Pine) and Diana. Subverting the usual gender tropes we see in blockbuster movies, the only overtly sexy moment in the film involves a naked, chiseled Pine emerging from a shimmering Themysciran bath. In any other movie that would be the moment for a gratuitous Angelina Jolie butt shot, but no–Wonder Woman subverts it to great effect. Even when Diana and Steve eventually sleep together, that’s handled with relative maturity. An adult is charge for once in the otherwise adolescent DCEU.

In Wonder Woman, there’s no embarrassing horndog gawking at a woman’s body a la Suicide Squad. Instead of pin-ups or conquests, Gadot and her fellow Amazons are lensed like warriors and athletes; Bruce-Lee-ification rather than objectification. The slow motion in the action scenes seem to be a nod to Zack Snyder’s aesthetic, but they also reminded me of Michael Jordan highlight reels. Here, enjoy the grace and the hang time of someone doing something extraordinary. And yeah, the kid in me wished I could so something like that. At its best, moments like this split the difference between Richard Donner’s Superman (“You will believe a man can fly”) and that song from Space Jam (“I Believe I Can Fly”).

Sure, the last half hour of Wonder Woman strays into schlocky CG superhero territory. I was sort of hoping the final battle with Ares would be shot like a moving neoclassical painting as seen with the backstory at the beginning, but alas. It’s basically the Doomsday fight from Batman v Superman, but with more magic lightning. And yeah, the bookending narrative is a clunky device that leads to the film’s awkward beginning and ending. And yet, I’m hopeful, and it’s the first time I’ve had that feeling with a DCEU movie. Rather than cynical, it’s sincere. 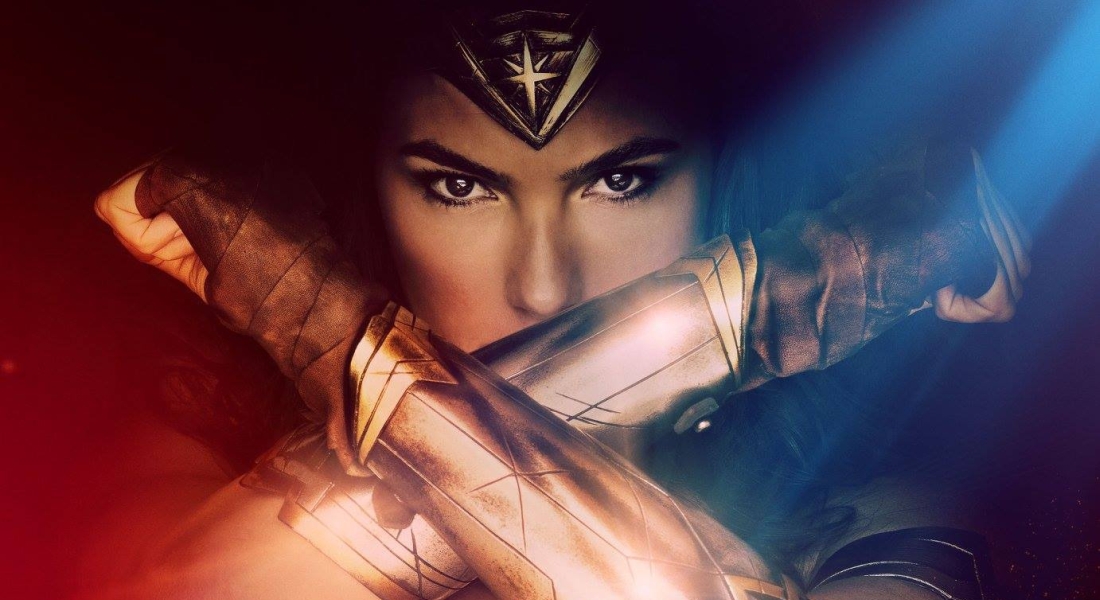 In an interview with The New York Times, Jenkins said, “I’m tired of sincerity being something we have to be afraid of doing.” She later added, “It’s terrible when it makes so many artists afraid to be sincere and truthful and emotional, and relegates them to the too-cool-for-school department. Art is supposed to bring beauty to the world.”

Outside the theater as I was going to catch Wonder Woman, a little girl stood in front of the movie poster and held her arms up in front of her face while her parents took a picture.

What it feels like to stand on a hill.