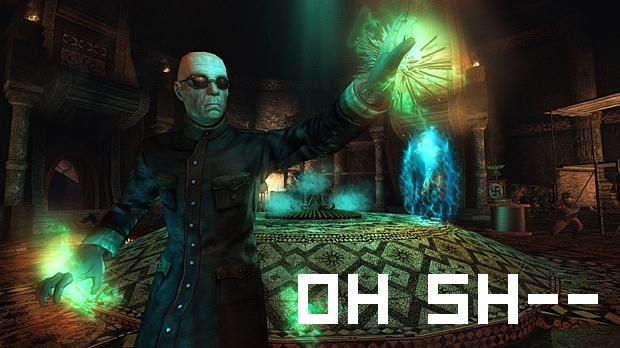 Yep. My pants need a-changin’. Today Activision dropped a bunch of screenshots for the next title in the Wolfenstein franchise, Wolfenstein. While the name is bland, the game certainly doesn’t appear to be. These screens are chock full of occult, funny tints, skeletal Nazi dudes, and 1940s firepower.

Basically, these screens are everything a Wolfie fan desires from a sequel.

If you’re wondering about the blue tint, I can assure you it’s not just an effect created to give you chills. As Nick found out at New York Comic Con, the tint indicates the usage of “The Veil” — a new special power that allows the protagonist B.J. Blazkowicz to see hidden paths, creatures, and even slow down time. It’s a pretty hip twist for a WWII shooter.

We’ll have another preview of the title in the near future, so look out for it. In the meantime, I’ll just keep looking at the cute little skeleton guy in the gallery. I just want to walk right up to him and pinch his little cheekbones.