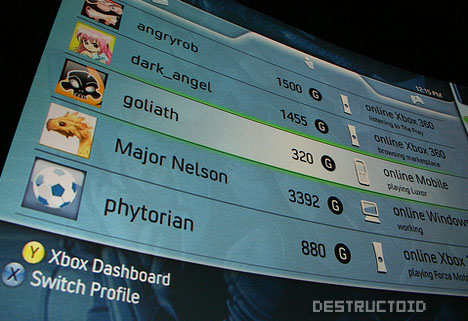 If you were wondering about the point of the Xbox 360 keyboard attachment we showed you earlier, here’s a little something that might help you understand why it exists. Microsoft announced today that Windows Live Messenger will be coming to Xbox 360 this May, giving gamers the ability to chat it up with not only other 360 users, but anyone using a Windows-based PC or  any Windows-Mobile enabled device.

Microsoft’s free Spring Update for Xbox 360 marks the beginning of all the yapping you’ll be able to do with your buddies, and includes a ton of other new features and goodies. Hit the jump to find out what they are, and for some more info on Windows Live messenger, straight from the press release.

REDMOND, Wash. — April 8, 2007 — Your Xbox LIVE® friends list is about to get a whole lot bigger. Microsoft Corp. today announced the launch of Windows Live ™ Messenger on Xbox 360™, connecting friends across Xbox 360 consoles, Microsoft® Windows®-based PCs and Windows Mobile®-powered devices. With this update to Xbox 360, friends and families can easily connect and chat directly from their television using Windows Live Messenger, a network of more than 20 billion relationships and more than 260 million active accounts.

Beginning the week of May 7, 2007, the Xbox 360 Spring Update will provide Xbox 360 owners worldwide with access to Windows Live Messenger features, broadening the communication options on the Xbox LIVE social network. Members of the 6 million-strong Xbox LIVE community currently send more than 2 million text and voice messages a day and can now use Windows Live Messenger to text chat with up to six people on their contact list at one time, while playing games, listening to music or watching movies . Text chat adds to the variety of options friends and families already have to communicate with on Xbox LIVE, including voice and video chat.

“Bringing the largest IM community in the world, Windows Live Messenger, to Xbox 360 makes sense, as Xbox LIVE has really become the largest social network on television,” said Jerry Johnson, product unit manager of Xbox LIVE at Microsoft. “For our growing community of 6 million on Xbox LIVE, using Xbox 360 is a very social, connected experience. They are using Xbox 360 to play games, music and movies while simultaneously communicating with one another through video, voice and text chat. With this announcement we are simultaneously expanding the access of Xbox LIVE users to existing friends and family while introducing Windows Live Messenger users to the benefits of Xbox 360.”

Beginning the week of May 7, users of Windows Live Messenger on Xbox 360 will text chat using the virtual keyboard accessible on Xbox 360, or by connecting a USB keyboard to the console. This summer Microsoft will launch a QWERTY text-input device, a new accessory that will connect directly into the Xbox 360 controller to support text and instant messaging.

Beyond Windows Live Messenger, the Spring Update for Xbox 360 includes hundreds of new features and enhancements including the following:

·         A richer Achievement notification pop-up will showcase the name of the unlocked Achievement and the gamerscore value without needing to leave the game to check the Achievements list.

·         A new Xbox LIVE Marketplace blade lets Xbox LIVE members access the content they seek — whether it is game content or TV shows and movies (available in the United States) — from one place on Xbox LIVE.

·         Extension of the background download functionality will allow owners to set their Xbox 360 console to turn off automatically after downloads are complete.

The Spring Update is free beginning the week of May 7 and is easily accessible to every Xbox 360 owner through Xbox LIVE or on Xbox.com.