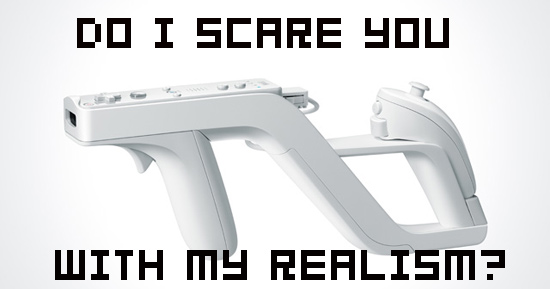 When I look at the picture above, I see nothing more than a bunch of plastic posing as a frame for your Nintendo Wii’s Nunchuck and Wiimote. Come to think of it, the game (Link’s Crossbow Training) Nintendo decided to include with the “frame” doesn’t look to be all that sinister either.

As you might expect, however, others are apt to see something more. While most of us will look at this for what it is — a modern day version of the orange zapper of the NES days — the critics will likely try to spin it, in order to try and further their own agenda. As Monica Hesse of the Washington Post seems to think, the Wii Zapper is poised to raise eyebrows on both sides of the argument when it lands in stores today.

Why, you ask? Well, because some people have a hard time distinguishing honest to goodness benign individuals (gamers) such as ourselves who just want to relax and enjoy some playtime with a Nintendo game — that happens to use a controller encasement that’s even less conspicuous than the peripheral most of us used while playing Duck Hunt as kids.

As for the overwhelming majority of people out there are concerned, the Wii Zapper is going to be just another item to make the Wii experience that much more enjoyable. I’d like to think that those who care to differ might tap into the portion of their brains responsible for reason. Nah… that might be asking too much.

[Via GamePolitics –Thanks, madninja and lemon]