Recently, press were able to attend a Wild Hearts hands-on session, and the game is shaping up to turn some heads when it arrives on February 17, 2023.

Here’s how things are shaking out so far, with a bit of background from Koei Tecmo producer Yosuka Hayashi, and executive producer of EA Originals, Lewis Harvey. 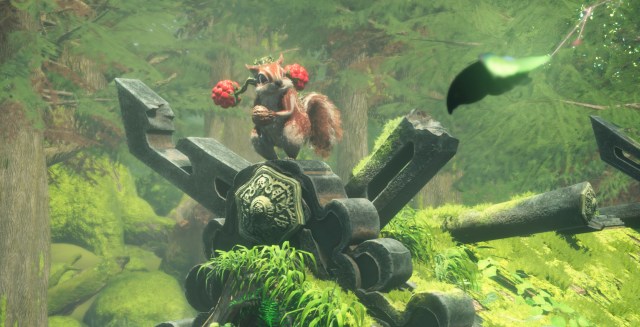 Hayashi kicked things off with a pre-recorded message, and specifically brought up the Toukiden series up (which had releases in 2013 and 2016) as part of Koei Tecmo’s history with the genre: and noted that the company had “unfinished business” with hunting games.

Wild Hearts is very much inline with his thesis for what he wanted another hunting game to be about: “an action game everyone can play together.” “Four years in the making,” this hunting game brings Kemonos (monsters) front and center, with “animal and nature” fusing together (in many cases, literally) to form the setting.

Before heading out, Hayashi noted that EA has the “global experience Tecmo Koei lacks,” so the partnership was a good fit for them.

As for what help EA gave explicitly, the “full force” of the partnership was employed; things like “user research” (testing/data to fine tune the game), and reaching a “broader, more western audience,” with “tutorialization, onboarding, and clarity of UI and mechanics.”

You can really see this in action when playing the opening moments of Wild Hearts, as the tutorial involves a straightforward hunt that showcases the game’s dynamic environments and some basics. There’s a lot going on with this game (especially with the traps), and most of it is clearly communication on-screen. 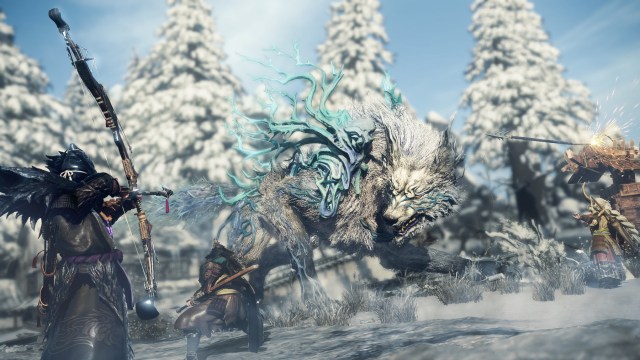 “You can climb any [monster] in the game”

Following up on Hayashi’s focus on the Kemonos themselves, Lewis Harvey calls them the “stars of the show,” as giant nature-infused beasts. They’ll apparently represent a “tremendous challenge” for players, with an emphasis on crafting to gain more of an edge. Crafting will “take enemies down while traversing the world, to build it back up.”

Crafting is also baked into the lore, as you’re apparently one of the very few people who can actually create new technology to take on the looming and out of control threat from the Kemonos. This includes magic-like building of structures, giant walls an enemy can smash into, or huge hammers that can stun. Ziplines, camps, human catapults, an umbrella gliding tool, and more are talked about and showcased in the Wild Hearts demo.

Harvey explains that there will be “over 200 variations for weapon loadouts,” when putting crafting into mix, and you can change up your weapons and armor with some form of a transmog system (where you can alter the appearance of your armor). Weapon types teased include a blade and shield combo, a bow (with an ultimate charged shot ability), and a staff that can transform into five different weapon types (the demo starts you out with a katana).

The Kemono modifying themselves based on the environment, which is very impressive looking (as you can see in the trailer below). An enraged king tusk boar-like creature, a lava back gorilla, and a giant hawk were all rattled off, among the ones we’ve seen so far. “You can climb any Kemono in the game,” Harvey says, and brings up a comparison to The Legend of Zelda: Breath of the Wild, but I see shades of Shadow of the Colossus in there too.

As for multiplayer, Harvey explains that although Wild Hearts was tested with different player counts, three players in total is ultimately where they landed from a balance perspective. In terms of scaling, Wild Hearts will “dynamically scale its difficulty,” including scaling for solo play; and will ratchet up or down as people join your session.

One big element of the multiplayer system is going to be the traps, and mixing and matching strategies and different builds. You’ll also get to “party up at camps and play through the entire game,” which includes every facet of Wild Hearts. During a demo of multiplayer, we saw that you’ll be able to open the world map and select a monster, then matchmake into a hunt. You’ll also see local hunters in your area. If you’re alone, you’ll have a companion.

Harvey clarifies that “every player gets their own rewards/loot,” so no one is going to get screwed out of drops. Full cross-play is also reconfirmed across the announced PC, PS5, and Xbox Series X platforms. 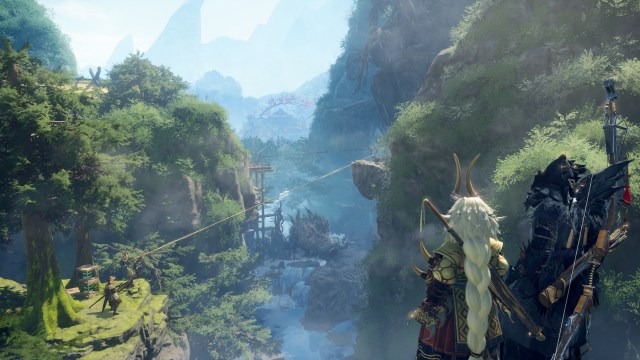 So far, Wild Hearts has a lot of promise

Kicking things off, the aforementioned tutorial really let me become acquainted with the visual style, and I’m going to love exploring this world. It looks fantastic, and nearly every character/enemy model I’ve seen so far is pronounced. Even little critters are fully of personality, and the “four seasons” approach is a genius way to automatically meld some style into the universe.

Mechanically, Wild Hearts feels tight (inline with the action focus Hayashi mentioned), and a key component involves free movement, with a dodge governed by a meter (which can be swapped to a running slide dodge, which slides a a sufficiently over-the-top character-action distance). You can climb on certain surfaces and bigger monsters, but you’ll need to physically press a grab button (RB/R1) to latch on.

Wild Hearts quickly shows off the important of elevation. Early on you can conjure up crates (hold LB/L1 and press X), which can be stacked, and trigger a little plunger to push you up at the top. Not only do you need them to get from place to place (especially when cliffs are involved), but you can also adapt new combat strategies with them. I started to pick up on creating vantage points, which I could leap off of and quickly trigger a lunging attack. The combo system seems rewarding and deep enough so far, especially with how elegantly the dodge mechanic is woven into everything.

So how big will the game be? While Harvey said that there’s more info coming, it will take “30 hours to get through the story, with a hell of a lot more content throughout.” Omega Force apparently has an endgame concept in mind that won’t get grindy, but future support is “TBD,” officially. Harvey notes that all of this is currently a work in progress, and they’ll announce “what they know when they can.”

Wild Hearts looks gorgeous, and the action-centric focus does it a lot of favors. It’s also great to see Omega Force get out of their recent wheelhouse, and ideally, the EA partnership gave them a chance to work with a bigger budget and extra time to smooth things over. Given how long this has been in development for, and how it plays already, I have good feelings about this one.

We deserve some real competition in the hunter genre space.