Yesterday, Nintendo held a launch event for Wii Sports Resort in New York City’s Times Square, allowing the public to try out the game three full days before its launch on Sunday, July 26th. They went all-out for this one, trucking in fifty tons of sand from across the Hudson River in New Jersey and turning Military Island into the game’s fictional tropical paradise, Wuhu Island. (Get it? “Woo-hoo”?)

I checked out the oasis of sand at the intersection of 7th Avenue and Broadway, and I’m here to tell you all about it. You can also take a gander at all the pretty pictures I snapped in the gallery below! I should mention that the first two were taken by Dtoider CactarCrush, who joined me in playing Wii Sports Resort. (She’s in two of the photos herself.)

Be sure to check back in twenty minutes, when I’ll be putting up an interview with Bill Trinen, Nintendo of America’s Senior Product Marketing Manager, on Wii Sports Resort, the launch event, and MotionPlus. 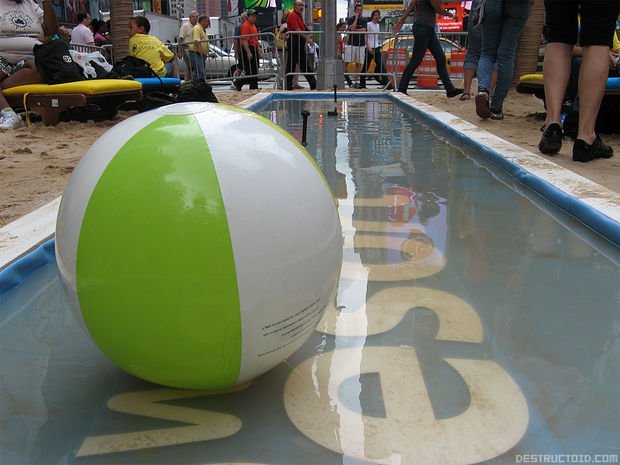 When I first read about the event, I didn’t really know what to expect. The invite promised “a sandy beach, swimming pool and tropical lounge,” all in the middle of Times Square, but how was Nintendo going to pull that off? By dumping a layer of sand on Military Island, of course. I was initially apprehensive about trudging on the “beach,” since I was wearing sneakers — after all, no one likes to get sand in their shoes — but the sand wasn’t particularly deep.

Again, Nintendo spared no expense in transforming Military Island into a resort. Spaced out among the sandy beach were six palm trees, complete with unripe coconuts hanging underneath the leaves sprouting out from their tops. The beach included a Wii Sports Resort-branded, kid-safe wading pool, perhaps deep enough to submerge a child’s foot up to the ankle. Floating atop the water was a beach ball, covered in a few spots with a thin veneer of sand where a kid had dropped it on the beach while playing around. Nintendo must’ve spread the word about the launch, since I noticed a few groups of children — apparently from local summer camps — in attendance. 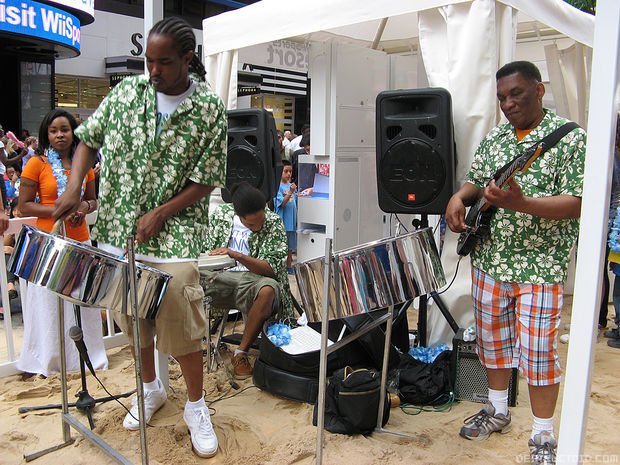 Staff members wearing flower-themed shirts handed out leis while a band serenaded the crowd with reggae and salsa music (the dude on the steel drums was fantastic, especially during a brilliant rendition of Gloria Estefan’s “Conga” that even got some people dancing). Throughout the day, professional athletes stopped by to play crowd members — that is, athletes who play sports that the Wii Sports Resort games are based on. I saw Frisbee master Bradford Keller take on a young girl; earlier in the day, ten-year-old table tennis whiz kid Alston Wang and archery pro Martin Vezzuto came out.

Amid the spectacle, of course, was the game itself. Nintendo had set up twelve Wii Sports Resort kiosks under six white tents — through most of the day, clouds threatened to open up, but by the time the rain actually began to fall, the event had ended. With so many available demo stations, none of the lines were too long, even with a relatively large crowd. 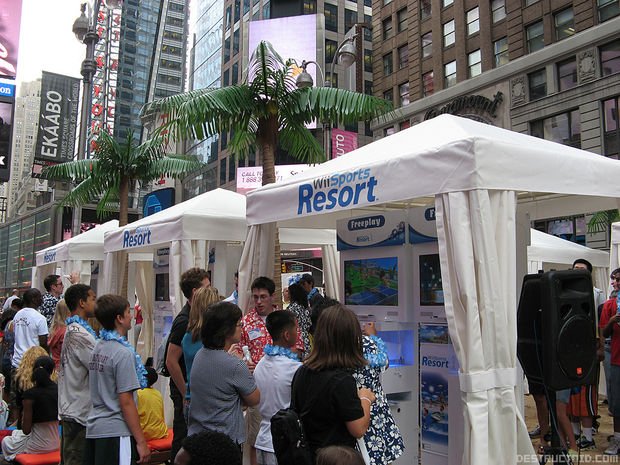 CactarCrush and I tried out the Archery and Swordplay games. This was my first time playing Wii Sports Resort, and I was highly impressed by the degree of fidelity in the controls. In Archery, you press A and hold the Wii Remote in your left hand while holding Z and pulling back on the Nunchuk with your right — as you would the string on a bow — and then release Z to let loose your arrow. It feels great, and the game ramps up the challenge by forcing you to compensate for wind and distance. By the way, I proved my sports prowess, scoring two 9s and a 10 in three shots (out of a possible 10 points per shot). Oh yeah.

Swordplay only requires the Wiimote, which functions as your sword in the game. While there is 1:1 control, which is fine-tuned so well that you can actually tilt your wrists to get around an attempted parry, the game starts an animation when you thrust forward. So once the game interprets that you have swung, your character will do that, and you won’t have any control for a split second while the animation finishes. And in practice, Swordplay seemed to devolve into two players wildly swinging their Wii Remotes, so while it’s still fun, I definitely prefer Archery. (Oh, and I beat CactarCrush in two three-round fights.) 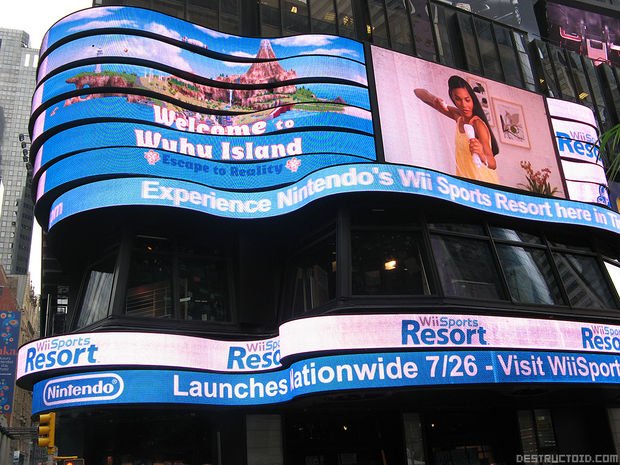 Everyone who played a game got a drink ticket; Nintendo was serving virgin strawberry daiquiris and piña coladas in the back. I had a strawberry daiquiri, and it was delicious! Overall, I must admit that the event was — no offense, Nintendo — surprisingly not lame. In fact, I had a pretty awesome time checking out Wii Sports Resort in Nintendo’s makeshift resort, and the game itself is a lot of fun to play. It was all rather surreal, to tell you the truth. Keep an eye out next week for Destructoid’s review of Wii Sports Resort, which will be out on Sunday, July 26th.