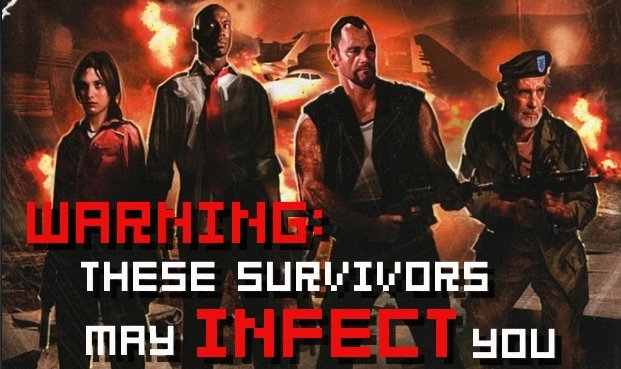 As the Left 4 Dead 2 demo recently illuminated, some survivors in Valve’s zombie-filled world are actually “carriers,” people who can transmit the supposed zombie virus but are immune to the infection itself.

After a full five minutes of research, I have come to the conclusion that Bill, Zoey, Francis and Louis may, in fact, fall under this category. As much as we all love these four survivors, is it possible that with every step toward safety, they are unknowingly spreading the infection further?

Though nothing is certain and I fully hope that I am wrong, more evidence points toward the original survivors as infection carriers than I would really like to admit. By blasting their way through an infected wasteland, have the fearsome four actually made the world worse?

Hit the jump for our analysis.

The survivors are not, and cannot possibly become, zombies

Though we don’t know for certain whether Left 4 Dead‘s zombie virus is airborne or transmitted by physical contact, we do know one thing: certain people, for whatever reason, are immune to it. The safe rooms writings in the first game make several references to “immunes,” presumably to explain why, even after being bit and beaten and vomited on by the rampaging undead, the four survivors never actually turn into zombies.

In the first saferoom of the Left 4 Dead 2 demo, we see the following message written on the wall:

“Why are they separating everyone”

“Some people are carriers”

“They’re immune but they can spread the infection”

“Who told you that?”

Though it’s probable that not all immunes are carriers, one has to consider that a pretty significant number of the immunes in the L4D universe must be carriers to justify FEMA’s CEDA’s decision to quarantine a percentage of the southern population.

As they are most definitely immune to the virus, could Bill, Zoey, Louis and Francis also be carriers? It’d be impossible to argue either way, unless we had evidence of them interacting with other, non-infected, non-immune human beings.

For whom the (bloody, rage-infected) bell tolls

At the end of Death Toll‘s third level, the survivors come across a lone (and presumably unstable) survivor who has holed up in a church. Because he is an asshole, he rings the church bell to summon a horde of infected rather than let the survivors into the saferoom. After dispatching the horde, the survivors open the saferoom to find that — surprise! — the Church Guy has turned into a random special Infected.

The Left 4 Dead wiki has this to say about the Church Guy:

“If you either listen carefully to the church guy, or search through the sound files; you can hear him talk about how the last person he let in attacked him. This is the reason he locks you out and is constantly heard muttering “Better Safe than Sorry”. This also explains why he turns into a Boss Infected and gives possible clues about how the infection spreads.”

And that makes a lot of sense. But at the same time, one can’t help but wonder — why, in all the hours that passed between the Church Guy getting wounded by a member of the Infected, did he only turn into a member of the Infected just when our survivors happened to show up? Within less than five minutes of being in the presence of Zoey and the others, the Church Guy goes from a reasonably healthy (if batshit nuts) human being into a Smoker/Hunter/Boomer.

There are three possibilities for the timing of this event:

– Louis, Francis, Zoey and Bill are carriers and either infected him through proximity, or merely hurried along the infection that was already coursing through the Church Guy’s veins

My money is on one of the latter two explanations.

If the Church Guy incident hasn’t convinced you that the survivors may be carriers, consider the events that take place between the end of No Mercy and the beginning of Crash Course.

The survivors leave Mercy Hospital on a helicopter (yay!), but the pilot turns into a zombie midway through the flight (boo!), so Zoey shoots him and Francis spends the entirety of Crash Course making fun of her for it (yay!).

But why did he turn into a zombie? Before he landed, he was fine; once he got into an enclosed space with four survivors who may or may not be carriers of the infection, he turned into a zombie. I mean, yeah, this guy could have been bitten a few days previous and just happened to turn into a zombie five minutes after meeting our heroes, but hell.

So, what does all this mean?

If the survivors from the first Left 4 Dead are actually carriers of the infection, what does that mean for them? Nothing good, I have to assume: based on FEMA’s CEDA’s policy of quarantining carriers until they get pissed and decide to revolt (as implied by a note written on the loading screen for The Parish), the survivors will either infect every person they come in contact with, or they’ll be captured and put in government quarantine.

Or they’ll do something none of us are expecting and somehow they’ll meet up with the L4D2 survivors in the third Left 4 Dead game, and it’ll be super awesome and it’ll be like The Jetsons Meet the Flintstones except good and you’ll be able to have Francis and Nick be assholes to one each other and oh my god so cool.

Or the government will line them up against a wall and execute them by firing squad.