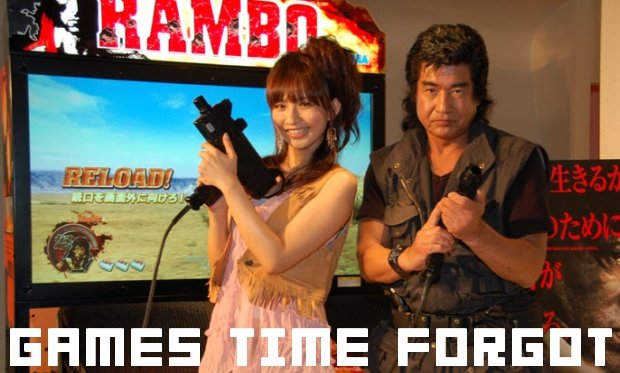 Every Wednesday, Destructoid highlights an overlooked game that shouldn’t have been.

Rambo, the relatively recent SEGA arcade game, is the dumbest game I have ever played in my adult life.

I mean this in the most complimentary way possible.

There is a stunning honesty to Rambo; it is a game with absolutely no illusions. It is utterly devoid of pretentions, innovation, apology, or moral justification. It wishes to be a stupid, shallow, gratuitously violent male power fantasy, and absolutely nothing more. It is idiotic, yes; but it is brilliantly idiotic.

Every single design choice, every one of the player’s very limited actions in the game are conducive to one thought, one feeling, one emotion,  that overwhelms the player with alarming rapidity.

That thought? I have a huge penis.

Hit the jump to see what I’m talking about.

[Also, yes, that is a picture of Segata Sanshiro promoting the game.]

It’s the first three Rambo flicks delivered in chronological order (except possibly without First Blood), told through a mixture of in game cut scenes and, more predominately and amusingly, direct footage from the films. At one point, for instance, you’ll be asked to take down a helicopter with an explosive-tipped arrow. Should you aim correctly, you’re treated not to a spectacular, 3D-rendered explosion taking place in the game engine, but an abrupt transition to the exact footage of the helicopter in question exploding partway through First Blood Part Two, or whatever the second movie was called.

Somewhat unsurprisingly, the game, like all three sequels, pretty much immediately ignores the is “war is bad” message of First Blood in favor of, promoting, you know, the exact opposite. In Rambo, war is fucking awesome.

If you wanted to be intensely boring, you could describe Rambo as a 3D, on-rails shooter using an automatic machine gun. I prefer to describe the game as sort of like Crisis Zone, without the cover mechanic because cover is for fucking pussies.

As mentioned earlier, the game has one goal: make you feel like the most stereotypical, hardcore, mass-murderin’ badass action hero in history. In this respect, it is successful to the point of hilarity. Armed with a machine gun with a ludicrously large magazine, you’ve got effectively no reason whatsoever to fire off little bursts to take off individual enemies, like you might in a less well-endowed game: you’re meant to spray the screen with that motherfucking M60 (or whatever it is) that you’re holding.

Enemies appear onscreen , complete with (in a legitimately clever design move) a small circular meter above their heads that changes from white to red as they get closer and closer to firing upon you. This little timer does two things: firstly, it gives you an extra strategic edge in prioritizing targets, and secondly, it gives you a ridiculous amount of time to fire at your idiotic enemies before you yourself are fired upon. Baddies appear by the dozens at any given time, and they’ll often jump onto screen and just stand there, waiting to fire. They demand to be taken out. They don’t exist to serve as a challenge, or to test your reflexes: they are there only to be killed by your inaccurate flood of machine gun bullets.

And if that weren’t enough, Rambo also has a “rage” meter that fills with every successive kill. If you fill the rage meter, four things happen for a limited amont of time:

1. You get unlimited ammo.

2. Your bullets have a bigger impact radius and do more damage.

4. You are treated to a sound effect of Rambo screaming “ARRRRRRRRHHHHHHHH” at the top of his lungs.

The end result of these bonuses is that once you hit the “rage” button at the front of the light gun, you become the personification of phallic death itself. If you were allowed to be a bit careless before the rage bonus, you’re allowed to basically act like an idiot once you become an invulnerable, screaming psychopath with limitless deadly bullets. Literally dozens of bad guys will fall in a matter of seconds as you spray back and forth, back and forth, watching soldier after soldier fall without ever removing your finger from the trigger or pausing even a second to aim with any degree of accuracy. As I said before the jump, it is absolutely impossible not to activate a rage bonus and subsequently feel as if your dick has suddenly and violently grown an extra six inches. Your mind will reel at the sheer stupidity and classlessness of what you are doing, but everything from the waist down will positively revel in the gratuitousness of it all.

The first time I played Rambo at my local arcade, I thought it was the most undistilled form of male power fantasy I had ever seen. The two light guns attached to the machine were huge, nearly the size of a real assault rifle, and they vibrated violently with every one of the thousands of bullets you’d fire off in a single playthrough. After I destroyed the entire Russian (or Vietnamese, or whatever — I didn’t bother to examine their nationality) armed services in the span of a few minutes, I put down the assault rifle and had only one thought.

I needed to dual wield these machine guns.

Putting in eight more credits, I picked up the two massive light guns with each hand, steadying them against my shoulders as they convulsed and kicked from the glory of battle. I looked like a complete idiot, of course — the guns were bigger than I was, and I probably wore the expression of a six-year-old who has just watched his first episode of Power Rangers — but as I stretched my fingers around the fronts of both guns to simultaneously activate two different rage modes, I knew that this was the honestly that lay at the heart of every mainstream action game.

A massive machine gun on each arm, my shoulders aching from the recoil and the screen positively filled with blood and fire and bullet impacts as I swept my machine gun fire back and forth over the landscape killing countless soldiers, I knew that this was the truth behind every Gears of God of Kill Resist Zone Doom 3. They may pretend to indulge in strategic cover systems, or compelling narrative or interesting multiplayer, but this — holding two hilariously over-sized phallic symbols and dealing unapologetic death on a massive scale without reason or forethought — was simply an exaggerated version of what they wanted to be, of the emotions they wanted to effect.

Rambo may be the dumbest game I’ve ever played, but its own inanity highlights, parodies, and exposes the less forthright stupidity behind more popular, “better” games.