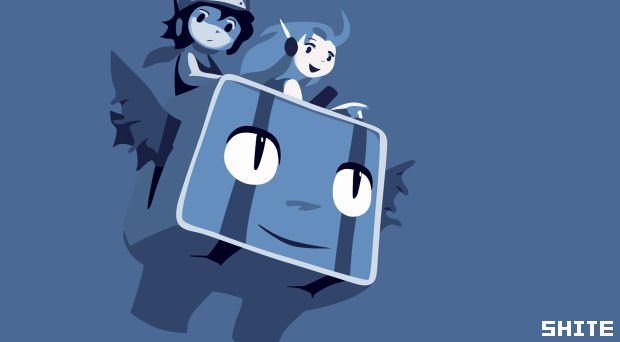 Cave Story made its long-awaited WiiWare debut this past week, and people were ecstatic. Many gamers adore this retro throwback, holding it high as proof that indie products can be just as well crafted as any retail experience. Some would go so far as to say that Cave Story is the greatest videogame ever made. These people, unfortunately, are wrong.

As a gamer, I deal only in polar extremes, so I am here to tell you that Cave Story is actually the worst videogame ever made. Sure, you may think it’s good, and might even be wondering how on Earth a rational human being could ever concoct a contradictory conclusion, but don’t worry. Once you read my irrefutable tome of pure evidence, you’ll understand.

Read on to find out why Cave Story is the absolute worst.

The graphics & music are shit:

The graphics for Cave Story are shockingly dreadful, and you can only disagree with me if your name is Stevie Wonder. Anybody with proper eyes can see it for themselves. Cave Story looks like a four-year-old’s drawing of a burning building full of insects, which the family dog vomited on five minutes after it was stuck to the refrigerator. The trouble is that it’s not in HD, and as someone who has played God of War III (which is obviously better than anything else because it’s on the PS3), my eyes cannot adjust to this hideous, retina-scarring garbage.

If the graphics are bad, the music is a crime against decency. A screeching cacophony of incomprehensible noise, when I first booted up Cave Story I seriously thought a wounded cat was being fingered by Fran Drescher in the backyard. There is an option to change the music to an “original” soundtrack on the Wii, but did I use it? Did I bollocks! If the improved soundtrack is that bad, I have no choice but to believe an older version of the same dreadful noise could only be worse. That is how music works.

The story is awful:

It doesn’t tell me who I am, it doesn’t tell me who anybody else is, the characters are all stupid and the main dude doesn’t speak. It’s been argued that the story is fantastic because you “collect” it like an item while you play. Ugh, seriously? If I wanted to collect my stories, I’d ask for the newspaper to be delivered page by page on an hourly basis.

No, I want all the story, including the ending, explained to me in the first five minutes of any game, so I don’t have to worry about it later. Only a twat would want to story drip-fed to them like it were a gigantic hamster in a cage made out of crap narrative.

The game’s difficulty is bullshit. I actually feel challenged when I play it, and that completely sucks. I want a game that makes me feel like I am winning, like when I play Modern Warfare 2 all the time with my six-year-old kid and kick his stupid noob fuckin’ ASS. Stupid prick doesn’t even know how to use the knife! I don’t play videogames to feel like I suck. I play them to rape them. If I’m not pounding a videogame into submission and making it my prison bitch, then I am not having fun, and I don’t see how anybody else could be having fun, either.

I can’t wavedash like I can in Super Smash Bros. Melee, which I play only at tournament level (it’s the only way to play it). I can’t IV train Cave Story‘s main character like I did with my team of six Level 100 Lucarios which I use to humiliate the kids at Middle Park Elementary until the cops move me along. I can’t even use the missile launcher to rocket-jump. How the Hell is anybody but a grade-Z retard supposed to enjoy a game like this? It’s way, way too hard, and doesn’t give you an option to ruin the game with statistics, spreadsheets and L-canceling. TURBOFAIL.

An obvious point, this. Cave Story lacks multiplayer, which is what all videogames need in order to be good. The first BioShock? Absolute dreck. BioShock 2? Brilliant because of multiplayer. A game without an online component lacks longevity because I will play it once and never play it again. Seriously, what loser replays the same videogame? I could be having sexual intercourse with women or smoking a “baked” with my homeboys because I am totally into cool drugs in the time it takes to replay Cave Story.

There’s simply no satisfaction to be had from a single-player game. Who, exactly, am I beating? The game? The game isn’t a real person. I can’t scream “OWNED FAGGOT” into a headset when I play Cave Story. The closest I could get was phoning up my grandmother and shouting racist abuse at her while the game’s credits played. She didn’t understand what I was doing and now I’m not allowed to visit her anymore. The nurses said I’m a “menace,” whatever that means!

Cave Story is about half-naked anthropomorphic rabbits that have sex with each other, probably. The whole game is a furry’s wet dream, and so only someone who gets off on the idea of being raped by a big-titted dog with a six-foot cock could enjoy this creepy, fetishistic disaster. It’s perverted, it’s disgusting, it’s patently immoral and I won’t be having any of it.

I mean, yes … yes I have masturbated over Krystal from Star Fox but that’s a no-brainer, everybody’s done that. Yes, I have a photograph of Rouge the Bat taped to the inside of my wallet, and I hold my hands up to sticking a drawing of Bulbasaur down my pants but I’VE NEVER WANTED TO FUCK A RABBIT, ALRIGHT!? Foxes, bats and Bulbasaurs, fine. Rabbits? No.

As a proud PS3 owner, I want everything to be on Blu-ray. If there’s not a PS3 version, then clearly the game sucks huge amounts of testicular sweat. Cave Story is biased against the PS3 because it released on WiiWare and not on the PSN, therefore it’s shit.

Of course, if Cave Story ever turns up on the PS3, then I may be forced to magically alter my opinion and declare that the game is actually really good. I’ll also shout “IN YOUR FACE XBOTS” and show off that I get to play something I once said was a load of garbage. Some would call that hypocrisy, but I would say that whoever says that is a fucking clitoris. Thus I am the winner.

Cave Story was developed as a multiplatform game after it had been confirmed as a PC exclusive for so long. This obviously wrecked the quality of the game, because Pixel gimped the PC version to make it fit onto the Wii’s hard drive. Anybody who knows even a slight bit about development knows that the Wii is rubbish and that games are always developed to work on the weakest system.

Even though Cave Story pushes the technical limitations of the Wii, it’s obvious that the PC version could have handled so much more. Instead, the graphics took a significant hit, and Pixel had to cut a load of content. Where was the open world? Where were the airships? All gone, thanks to the Wii. The game ended up as a linear experience with a crap combat system, all because the developers concentrated on making two versions, instead of a perfect version that would have easily been one hundred times better on the platform it was meant to be on.

I bought a PC for Cave Story, only for Pixel to turn traitor at E3 2008 and announce it as a multiplatform game. Fuck you Pixel, you are biased traitors!

Cave Story is not Sonic the Hedgehog:

Cave Story isn’t exactly what I expected it to be; therefore, it’s crap. When I saw that it was a side-scrolling game, I thought it would be just like Sonic the Hedgehog, as any sensible person would. I mean, it’s a platform game. That’s what Sonic is as well. Stands to reason they’d be indentical and awesome, right? WRONG.

You don’t turn into a ball, you don’t fight Dr. Robotnik, and you’re not even blue. Is this a joke? Is this some sort of joke that gamers just won’t get and will rage over because they don’t understand irony? All I know is that I don’t understand why you’d make a side-scrolling platformer and not put Sonic in it.

What a shitty game.