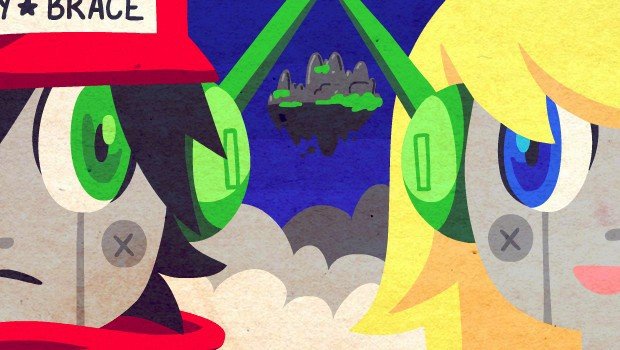 Everyone has a game or series of games that they love above all others. A while back, a few of my fellow editors wrote articles proclaiming their favorites. I love talking about the games I love, so this was an idea I wanted to jump in on. But I couldn’t decide what my absolute favorite game was.

It took almost a year, but now I’ve finally figured it out.

A little game called Cave Story was released for WiiWare this week. I first played the PC version years and years ago, but ever since this new version was announced, I haven’t touched it because I wanted the experience to feel brand new all over again.

While I’ve always talked very highly of it (my first avatar as an editor was an image of the character Momorin), it wasn’t until I sat down with it this week that I realized… this is it. My favorite game is Cave Story.

So: Jim. Chad. I’m sorry, but you’re wrong. Cave Story is the greatest videogame ever*.

The story is a treasure

By that, I don’t mean that it’s the best videogame story ever written. I’m talking about the way that it’s told.

Cave Story treats its story like an item. You start out without a weapon and any knowledge of who you are, where you are, or if you even have a “quest” to embark on. The further you traverse, not only will you find weapons, upgrades and other special items, but you’ll also “collect” bits of story through the people you meet or the places you go.

I’m aware that it’s not the only game to do this, but I feel like it does the one of the best jobs of it. Its cut scenes never really hit you over the head with what’s going on, so it’s all up to you to look around and piece things together. There are even a few collectible items that serve no purpose aside from adding to the depth of the story and the characters.

I believe this method of storytelling is the type videogames are best at. I love being a detective, especially in a place as strange as the world where Cave Story takes place. Unearthing the history of the Mimigas and the witches and the Demon Crown is as fun as the action (and the action is so much fun).

The graphics and sound are amazing

This point is hard to put into words, since a game’s beauty is in the eye of the beholder. But I couldn’t let it go unmentioned. Cave Story is visually and audibly beautiful. Pixel’s artistic style is very simplistic, yet it somehow yields complexity. The music feels the same way. Here, have a taste:

I have to mention that he not only drew all the the pixels himself, but he also created all of the sounds from scratch. What a guy!

It’s got cool weapons out the wazoo

Some of Quote’s guns are ordinary (Polar Star, Missile Launcher), but the vast majority fall into the extraordinary. There are so many strange and wonderful ways to blast through bad guys. There is a maximum of six guns you can have (out of a total of ten), and each gun has three different upgrade levels, many of which drastically change the way the weapon works.

One of my personal favorites is the Bubbler. It shoots bubbles, which is as lame as it sounds, but it gets awesome at level 3. The bubbles float around you to form a shield, before shooting off like darts in whichever direction you choose. The Fireball is also amazing, as its bullets travel along the ground and bounce off walls. It’s great for clearing out the path ahead.

My favorite weapon, however, is the Nemesis. It only takes 1 EXP to level up, but becomes weaker each time; at Level 3, it shoots rubber duckies that only do one point of damage. I don’t just like it because it shoots ducks (though that doesn’t hurt); I like it because it changes up the gameplay drastically. Once you grab the Nemesis you’ll have to dodge weapons crystals and actually damage yourself just to keep the weapon useful.

The possibilities are endless

There sure are a lot of ways to go about playing Cave Story. Every gun has a different use, and though a mixture of them all is recommended to get through the game as painlessly as possible, you could finish the game with only one of them if you wanted. Similarly, you can choose not to pick up life capsules (which increase your health), or missile expansions. Some players have even gone so far as to limit themselves to 3 HP and a level 1 Polar Star for a totally different (and difficult) experience.

Not to mention the three different guns you can trade the Polar Star for. If you trade for the Machine Gun, you get a weapon that can propel you into the air, making the jumping portions of your journey a lot less frustrating. If you get the Snake, you lose both the Polar Star and the Fireball, but you gain a Fireball-esque weapon that can go through walls. Lastly, there’s the Spur, the most powerful weapon in the game. Unlike the others, it is a charge shot, meaning that you only need to hold down the button to level its shots. You can only get one of these, or you can just choose to keep the Polar Star.

There are also three different endings you can get. They occur at different points and can really change the game as a whole. If you get the bad ending, you haven’t even made it halfway through the whole game. Even the good ending cuts the game a little short. Only the “best” one allows you to play the game in its entirety, revealing a special final level known to fans as Hell.

As many times as I’ve played Cave Story, I’ve never actually made it to Hell. If I ever do get there, I’m not certain I would ever see the end of it. It’s a rough place.

It’ll kick your ass, if you want it to

Actually, the whole game is rough. It gets less tricky once you can play it with a controller, but not by a whole lot.

You can circumvent the difficulty by choosing certain things, like trading for the Machine Gun or getting the earliest version of the Booster jetpack, but these things affect the ending you get. It’s a cool trade off. You want the game to let up on you? You can take this item and forfeit the best ending. You want it rough? Ignore all the luxurious items and go off to Hell. The worst ending marks the easiest way out.

Of course, you probably won’t know you can do this until after your first play-through… but I think this was the best way to design the game. If I had to go through a clearer choice as to whether or not I wanted to see the best ending, of course I would have taken it. But if the Ashley who played Cave Story for the first time was allowed such easy access to Hell, she probably would have given up on the game in frustration, cursed its name, and never gone back. She wouldn’t be here talking about it in a positive manner today.

Look at ’em! They’re white, fluffy (I assume), floppy eared and very cute. It’s hard not to love these guys, and, without giving too much away, that has a big hand in eliciting emotion from the player. They’re the most oppressed people in the entire game, and if it doesn’t move you to see them get pushed around by bigger, meaner people, then you have no heart.

Really though, all of the different races on the island are worth playing Cave Story for. So much creativity has gone into them that it really feels like you’ve never seen anything like them before.

I could talk about more specific things I love, like collecting Jenka’s puppies or the way Kazuma talks to Sue over IM. I could go on and on forever about how moving the story is, how satisfying the combat is, and how god damn amazing the controls and gameplay are. But to avoid thousands more words for you to read (and possibly spoil the game for those who have yet to play it), I’ll end this as briefly as Ican.

I can’t remember what it was that led me to Cave Story all those years ago. What I’m certain of was that (A.) The year was 2006, and (B.) I fell in love with it right away. I had never played anything like it before. At the time, I had not played the game’s most obvious influence, Super Metroid. But beyond that, it was the first independently made game I’d ever laid my hands on.

Knowing that the game was made by one person made me unsure what to expect from it. I kept waiting for it to end, but it kept going for hours and hours. The characters were well-made and fun to know. The story kept me gripped. The gameplay was fun, and (satisfyingly) hard. It was an epic of a game, and it blew me away.

It was my gateway into indie games, which was both a good and bad thing. It got me playing other indie games, but it also set a very high bar for all the things I played. Very few games I’ve played since have met the standard set by Cave Story, including big-budget titles.

For all its strengths, the game does have its flaws. For such a difficult game, save spots are sometimes way too far apart. Sometimes there’s a little too much emphasis on talking to an exact NPC/doing an exact series of things before you can move on. It is obviously not perfect. But damn, does it come close. So close that I, and countless others, have a huge passion for all things Cave Story. It’s a game everyone should try at least once. If not on WiiWare, the free PC version.

*This is, of course, a bit of playful hyperbole. But I do love the game very much!