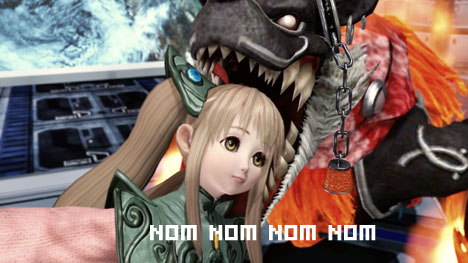 A guy trying to touch a girl while she sleeps. Super busty elf with laser staff. And a dumb anime bitch leaning in to get her head bit off by a domesticated velociraptor in a spaceship (above)? Wow, the new Star Ocean looks f*cking awesome!

So we totally don’t know what’s going on here in the screenshots. All we know is that just like the trailer, these screens from Square Enix’s upcoming Xbox 360 title Star Ocean: The Last Hope (March 3rd release date) look fantastic. And while it’s true that looks aren’t everything, that’s really all we have to go on, aside from a bit of hints from the official Web page.

So let’s look back at these super high-resolution screenshots:

It looks like cop-a-feel-kun got caught in the act. What an idiot. Um, there’s roommates? Co-ed?

On a more serious note, the battle scenes look great.

And finally, are they playing the next Star Ocean, sometime in the future?