“I feel like Travis [Touchdown] is a part of myself, constantly there with me” Grasshopper Manufacture head Suda51 told us through a translator. “I think about him a lot, like ‘Huh, I wonder what Travis is doing right now.'”

Any No More Heroes conversation is going to naturally steer toward Travis. When Jordan and I sat down with Suda this past weekend to talk about Travis Strikes Again: No More Heroes, I found myself captivated by another character. He’s the man on the left in this concept art: 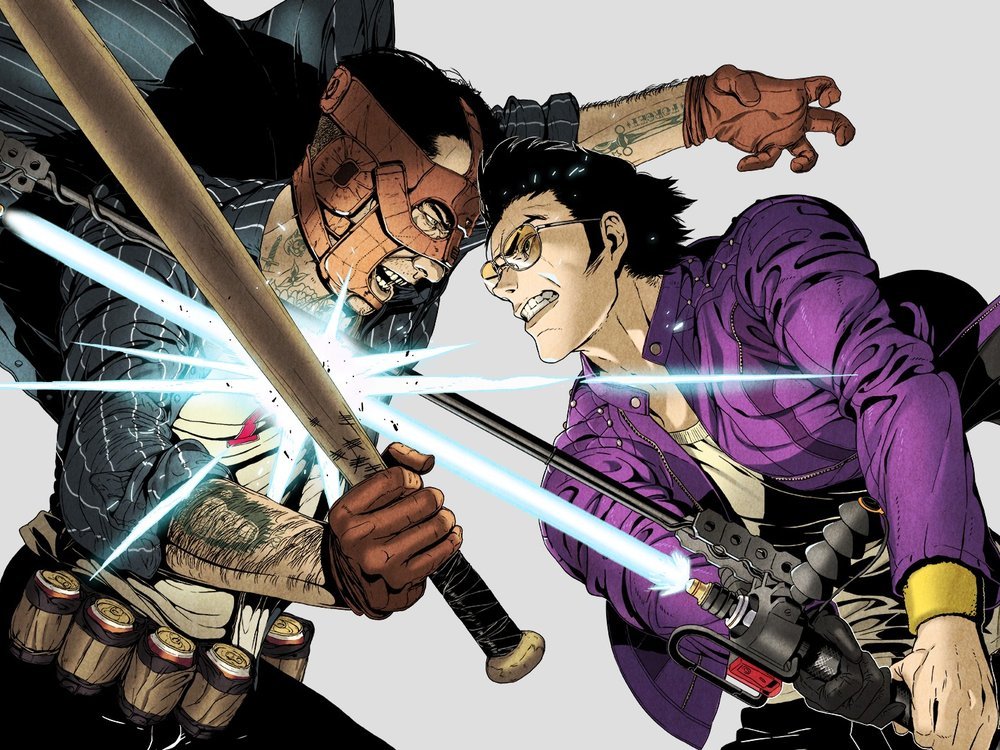 That’s Badman, which Suda makes a point of clarifying isn’t Batman. Although Batman would be a perfectly acceptable alternate name if, you know, DC Comics wouldn’t have something to say about it. This was Jordan’s interview, but I had just a couple of things I wanted elaborated on. Like is that a holster of beer around his waist.

“Ah, yes. Beer.” Suda commented. “[Badman] was originally a Major League Baseball player. He played for the Astros. Why the Astros? I don’t know, he just played for the Astros. He was a really heavy drinker and he used to get shitfaced during the games. That happened like a few dozen times too often. He’d get really drunk during the games and he ended up getting cut from the team. So yeah, he carries beer with him.”

I couldn’t contain my happiness in the preposterousness that a professional athlete would have to get blitzed some 36 times during competition before anyone considered it a problem. Then again, Suda has spent a career turning preposterous into something of a personal hallmark.

My second question was why the mask. Suda remarked “After leaving Major League Baseball, he became an assassin. When he became an assassin, he got involved with some really messed up dudes and got injured really badly. They kinda screwed up his face, so now he has the mask to cover it up.” You know, the casual transition from professional baseball player to professional assassin. Lots of washed-up players make that jump.

Badman’s the presumed antagonist of Travis Strikes Again. He’s positioned to be the guy Travis has to race against to recover six Death Balls because getting all six of those means you’re granted one wish. Maybe something even more sinister will force Travis and Badman to team up. Who knows. I just dig his whole backstory.

We’ll have more on Travis Strikes Again and Suda later this week when Jordan fleshes out the whole interview.