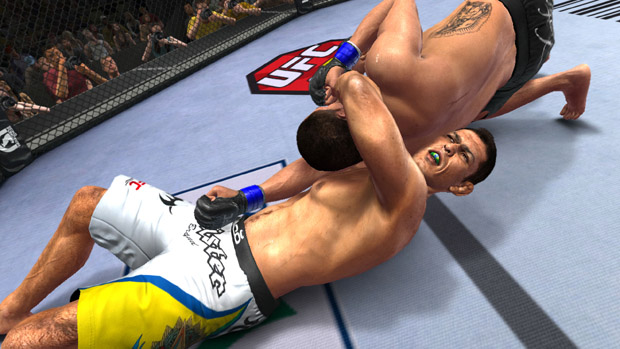 Those that got down with last year’s UFC Undisputed 2009 know that it’s a very deep fighting game. We have a full preview of the game coming up later today, but for now we’re going to give you a quick rundown of the improvements 2010 has brought about. There’s a ton of new stuff — this is not just a sequel rehash, folks!

First off, while there’s tons of new moves, all the ones that carried over from 2009 have been completely re-animated! The devs wanted to better convey the sense of struggle and tension, so they reworked all the strikes and submissions. In a nifty upgrade, the preset combo system has been replaced with a freeform one that lets you combo just about any move. Forget memorizing move lists. Likewise, in the clinch game, devs worked to reduce controls memorization, letting you get to a more natural feel. In a similar mind, a new posturing system has a “down postured” and “up postured” variant of every position in the game, letting positional advantage figure into the system. Finally, a new Sway System lets you move your body or head out of the way from a deadly strike, and counterattacks are available as a part of this.

All of the above mentioned improvements go a long way towards increasing realism for UFC Undisputed 2010. Some of these may be a bit difficult to convey in words, but it all makes sense with some hands-on time, some of which I enjoyed last week.

The create-a-fighter mode saw tons of improvements as well. It’s so much easier to make the character you want, and then tweak to your liking. You’re no longer stuck making a specific fighter type. Now, with the “a la carte” system, you can mix moves and disciplines to your liking. A new drag and drop system makes character design easier as you can now place logos and tattoos anywhere. I saw nipple tattoos last week!

Something they call “The Game Is Watching You” technology not only tracks your moves and “learns” from them as opponent AI, but also has in-game announcers calling out your past transgressions.

There’s tons of other improvements that would take forever to list. You’ll have to read my preview for a full rundown. Here’s a final one that’s going to please anyone that played UFC Undisputed 2009, though. The in-game menus no longer suck. They’re fast and clean. No hair was pulled out during my play time. Thanks for that, THQ.