With the surprise announcement of Arkham Asylum 2 at last night’s Spike TV Video Game Awards show, we at Destructoid couldn’t help but tremble with excitement, many of us doing so while wearing official Batman pajama pants (and by “many of us,” I mean “me and only me”).

It almost goes without saying that Arkham Asylum was a triumph not just for comic book games, but for the stealth-action genre in general; it proved that stealth doesn’t have to be slow-paced and needlessly punishing, while — for the most part — showing a respect to the Batman mythos that made even the Batman-pajama-pant-wearing crowd blush in nerd inferiority.

What of the sequel, then? What do we want to see out of Arkham Asylum 2, and what do we want to see fixed from the first game? The following requests are as fanboyish as they are pretentious (far as we know, our ideas could be really, really bad), but it stands to be said: we loved the first game, and the sequel announcement has gotten us in an excited, list-writing sort of mood.

Hit the jump to see our Arkham Asylum 2 wishlist.

Basil Karlo, aka Clayface, had a brief but hilariously cool cameo in the first Arkham Asylum: trapped in his prison cell and initially appearing to the player as Commissioner Gordon, his true identity was only revealed after a detective mode scan.

We’d love to see some more of him. In both the comics and the TV show, Clayface was a damned enjoyable villain; sure, he didn’t represent Big Philosophical Ideas in the same way the Joker or the Penguin did, but come on — he’s a shapeshifting psychopath with a body made of mud. What’s not to like? Clayface could easily play a similar role in Arkham Asylum 2 to that of Bane in the first game; a character who doesn’t really represent anything so much as a balls-to-the-wall boss battle. Or, even better, he could play the same sort of tricks he did in the first game, but with much greater consequences to gameplay. Imagine having to figure out whether the Commissioner Gordon standing in front of you was the real deal, or simply a mud-based facsimile.

Actually, that sounds a little too much like this. Bad idea. Forget that last part. Come to think of it, forget the “make him exactly like Bane” part as well, because we definitely need: 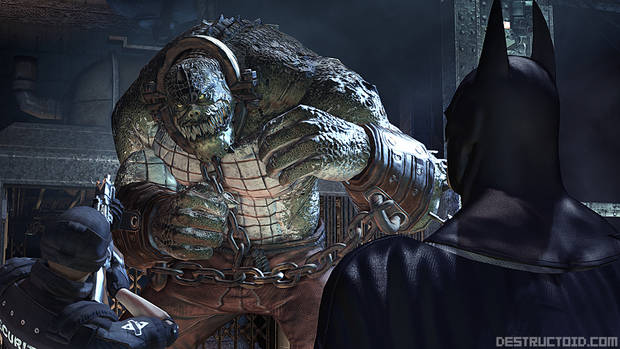 This is the obvious critique, but it still has to be said. The boss battles in Arkham Asylum should have represented the very few times when Batman was outmatched, overpowered, and actually in a position of weakness; instead, they were either really easy (Killer Croc), really repetitive (Poison Ivy), or both (Bane, the Joker). Batman spends the entirety of Arkham Asylum as an unstoppable face-punching force, so why not throw some boss battles that really change up the power dynamics and force Bats back onto the ropes?

Come to think of it, much of the game’s later half suffered from a drop in difficulty. Once you’d upgraded Bats with the uber-batarang and uber-batclaw, you could more or less sleepwalk your way through many of the stealth sections (the high-consequence, “don’t get spotted even once or we’ll shoot this civilian” setpieces notwithstanding). While putting Batman in a position of total superiority over the thug enemies isn’t necessarily a bad thing — he is the Goddamned Batman — the lack of difficulty and enhanced bat-gadgets dissuaded players from coming up with interesting strategies during the stealth section.

To this day, my favorite moment in Arkham Asylum occurred during the first half of the game, when I had nothing but a single batarang to my name. With great care, I silently took down a thug near an electrical fence. When his three buddies rushed up to check on him, I simultaneously floored one of them with a batarang to the face while initiating a glide kick on the second baddie. My kick landed perfectly and not only sent my target into the dirt, but the impact of the kick actually knocked the final bad guy into the electric fence, instantly knocking him out. In the span of three seconds, I’d knocked out three bad guys with nothing more than a single batarang and a well-placed kick to the face. Unfortunately, once I could throw eleventy billion batarangs at once and pull people off ledges without breaking a sweat, I never had the opportunity to do anything that cool again.

A continuation of the “less is more” philosophy 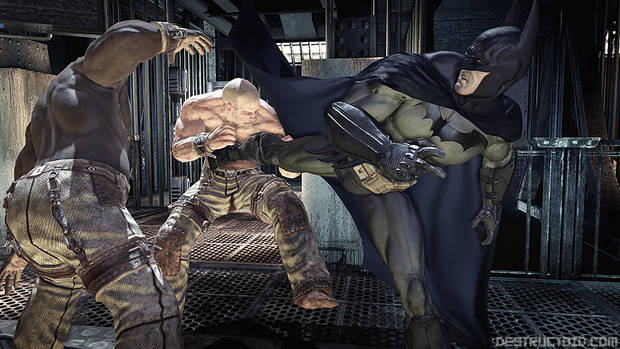 The first Arkham Asylum intentionally neglected to include Batmobile or Batwing driving sequences.

The last thing Arkham Asylum 2 needs is a bunch of awkward driving sequences that serve only to frustrate the player and lead to another bullet point on the back of the box. The first game only did two or three things, but it did them really damn well: the stealth was fantastic, the fighting was great, and the atmosphere was cool. Sequels love to add needless extra shit just for the sake of doing so (see: San Andreas), and we’d hate to see Arkham Asylum go that route.

On the one hand, how exciting — moved where? Given the fiery streets and general atmosphere of chaos, is the trailer implying that the entire city of Gotham is now an extension of Arkham Asylum? If so, does that mean we’ll be looking at a more sandboxy-style game than the first Arkham? We can’t say for sure until we get more info beyond a teaser trailer and a vague Web site.

Still, wherever Arkham has moved, we really, really hope it maintains the same atmosphere of decay and griminess and instability that caused so many reviewers to compare it to BioShock‘s Rapture.

Arkham Asylum‘s detective mode was so useful, we never turned it off. I’m sure you can relate. While it was great to be able to see enemies through walls and immediately identify breakable parts of the environment, looking at the world through a perpetual filter of blue quickly became tiresome. If the detective mode could be tweaked to allow the same level of functionality without compromising all the work the graphic artists put into the world, we’d feel even more immersed in the Arkham atmosphere. 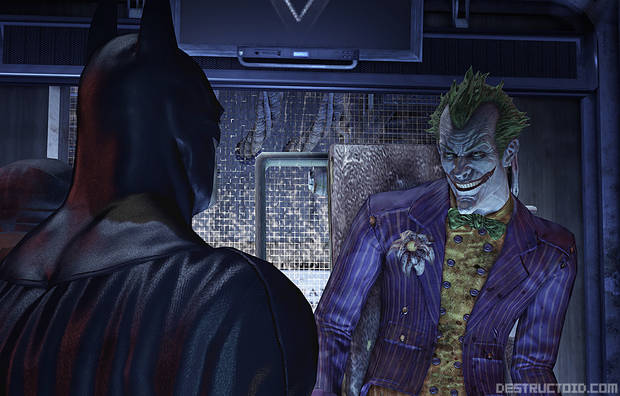 I have yet to run into a single person who really, truly enjoyed the ending of Arkham Asylum. Much of this probably has to do with the fact that the actual climactic fight isn’t particularly different from any of the other boss battles, but even more of it has to do with the fact that it simply didn’t feel right from a character-based perspective.

Batman is about punching people and sneaking in the shadows and grunting things, yes. Equally, however, he and his villains are representations of philosophies, and systems, and fears, and ideas. Batman isn’t just a dude in a funny suit; he’s  what happens when humanity is confronted with mindless evil and tragedy, and chooses to fight back against that evil (while struggling to stay separate from it). The Joker isn’t just a funny dude in creepy makeup; as depicted in The Dark Knight and The Killing Joke, he’s Batman’s philosophical opposite. A man who saw the idiotic horror and unfairness of life, and chose to embrace it, to nurture it, to become a parody of it. These mythic attributes are why Batman still endures — the face-punching is almost secondary, and to assume otherwise ultimately results in the sort of narrative missteps Arkham Asylum‘s climax suffered from.

Now, don’t get me wrong, Rocksteady. We want the face-punching. We love the face-punching. But we’d also love to see more thematically complex characters and conflicts. Give us Frank Miller, but don’t be afraid to add a dash or two of Alan Moore.