Hands-on preview with The Last Guardian

The years-long layup leading up to The Last Guardian‘s release has been, Oh I just fucking know the cute dog/bird/animal thing is going to die. The death of a beloved animal pal is an easy emotional trigger that can easily backfire if done badly, but Team ICO doesn’t make bad games. At the same time, unless that potential Old Yeller moment is incredibly hard-won, it’s probably a bolder move to try to equal that theoretical emotional resonance in a less easy, less expected way.

I don’t know how it’s going to end, but I do know that The Last Guardian is real. I mean really real. This isn’t just a surprise trailer, the form it appeared in at last E3. This year it got a release date and I actually got to play it. And seven years later I’m still picking up what Fumito Ueda is throwing down.

I played what might be The Last Guardian‘s first 45 minutes or so, none of which included the live gameplay that was demonstrated at E3 2015.

There’s an artful opening set to light music that cuts between and pans over taxonomical drawings of animals — bats, types of flies — with what might be their scientific names. It feels like something out of a Jules Verne novel. The black sketches on white paper soon give way to intrigue, though, as classic fantastical creatures like the phoenix or gryphon follow the more familiar. The sequence ends on a drawing of The Last Guardian‘s Trico, with the word “Trico.”

Ahead of that is a short scene: a close-up on some gleaming object partially unearthed in the dirt. You can hear children playing in the background. The game properly opens up with the boy mysteriously waking up next to a chained-up, spear-pocked Trico.

The boy you play as serves as narrator here, but as an old man recounting the tale of the game in retrospect. He notes that the tattoos all over his body were not there before, just as unexplained as his ending up there. He does have tertiary knowledge of Trico, though, a “great man-eating beast” talked about in hushed tones by his elders. 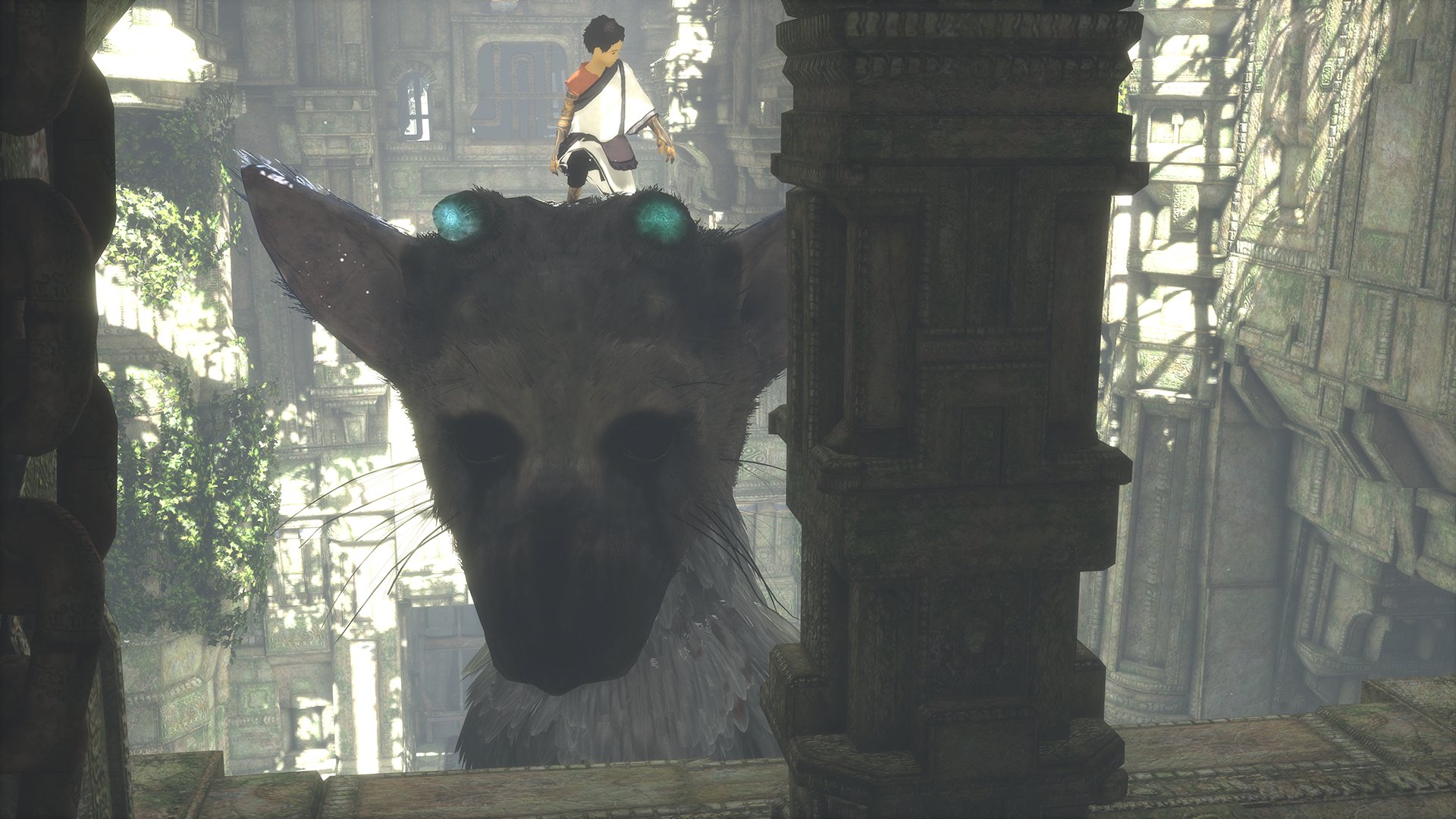 Trico is wary of the boy to begin. It hisses and recoils. Climbing up on the beast (R1 to grip, triangle to jump; it feels like ICO and Shadow of the Colossus), the boy removes one spear and gets knocked out as Trico bucks and cries in pain. And I have to give an extra nod to the fantastic animation work, from the boy’s high-stepping stairs walk we talked about last year, to the realistic scramble he does when jolting away from off the floor. He moves around like a proper kid with goofy extremities that are still growing.

The game quietly takes its time building this relationship, though if you dawdle too long, the narrator will chime in as if he were recounting a story, but it amounts to a gameplay hint, e.g. feed the poor pup some grub to get things moving and get him more trusting of the boy.

A bit later on, the boy worms his way through a vertical crevasse and ends up in a strange, circular, blue-ish white room with an ankle-deep pool in the middle. At the other end is an alcove with some kind of stone structure in the floor — it looked vaguely human shaped, like a sarcophagus, but bigger. I was thinking ceremonial grave. At the head is a mirror that looks to be the same gleaming object that opened the game.

The boy holds it like a buckler and can use it to create a beam of concentrated green light. As I made my way back to Trico, this spartan room absent further plunder, I learned the point of the light: Trico will shoot a magenta bolt of lightning from its tail, which has puzzle applications as you try and figure out how to get out of this place. It’s also the most direct control you have over Trico

No combat in the 45 minutes or so I played and nothing else too new. It ends on the boy crawling out of the mysterious ruins and bidding Trico adieu until Trico jumps a few stories out of a large hole in the top of the structure and the two look out at the expansive, austere land. It feels like a seamless extension of ICO and Shadow of the Colossus despite the huge gap.