My baby beat me up

The Simpsons was perhaps the most impactful piece of media of my entire childhood. I say that realistically, as sentimentally I might say Ghostbusters, Star Wars, or The Legend of Zelda, but in actuality, it was The Simpsons that left the most lasting impression. I checked out around the time I became a teen, but I can still quote from and recount episodes I haven’t seen in over a decade.

Video games haven’t always been a good fit for the franchise. Despite being what is essentially a family sitcom, we still managed to squeeze out a few decent games, but then we have The Simpsons Wrestling. Its reputation is so bad, that it’s exactly what drew me to the game in the first place.

I was hoping to compare it to WCW Backstage Assault so I could use analogies that make it sound like a wrestling match. Like, I could say, “WCW goes for the Irish whip of horrible graphics, but, oh no! Here comes The Simpsons Wrestling with the monotonous drop from the top rope. The problem is, The Simpsons Wrestling is so misguided that the comparison doesn’t fit. 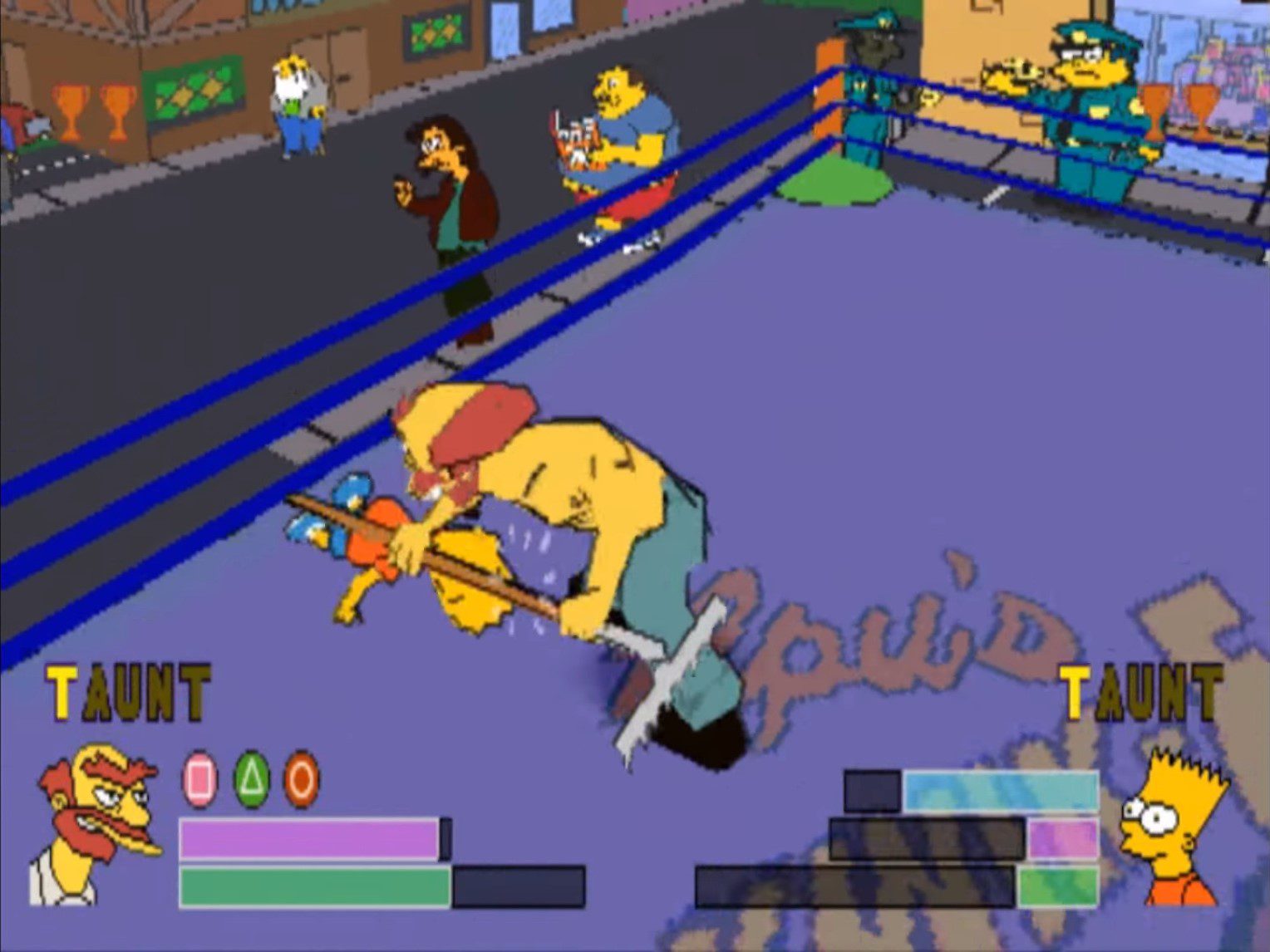 The thing is, The Simpsons Wrestling is pretty far removed from actual professional or Greco-Roman wrestling. I’d love to see the actual pitch. Was this even supposed to be a wrestling game, because it just plays like a fighting game starring Simpsons characters. If so, why? At the time of release (and perhaps even now), there was never a wrestling episode of The Simpsons. The was a boxing episode, “The Homer They Fall,” which would have made a heck of a lot more sense, but we wound up with wrestling but… without it being wrestling.

What it has in common is that it takes place in the ring, you can launch yourself off the ropes (but not climb them), and you have to pin your opponent at the end. Not pin their shoulders, mind, which is the actual rule, but just, like, lay on them comfortingly while you count to three.

There’s no grappling in The Simpsons Wrestling, which I think is the strangest oversight. There are some special moves that involve grabbing another character, but none of the suplexes or holds that you might expect. Mostly, you’re just smacking the other character. It’s a slap fight. It uses three buttons for attacks, which can be joined with jumps and bouncing off the ropes. It’s not a lot. If you’re feeling really spicy, you can pogo on your opponent’s head. That’s actually a mechanic in the game, but not, like, submission holds. 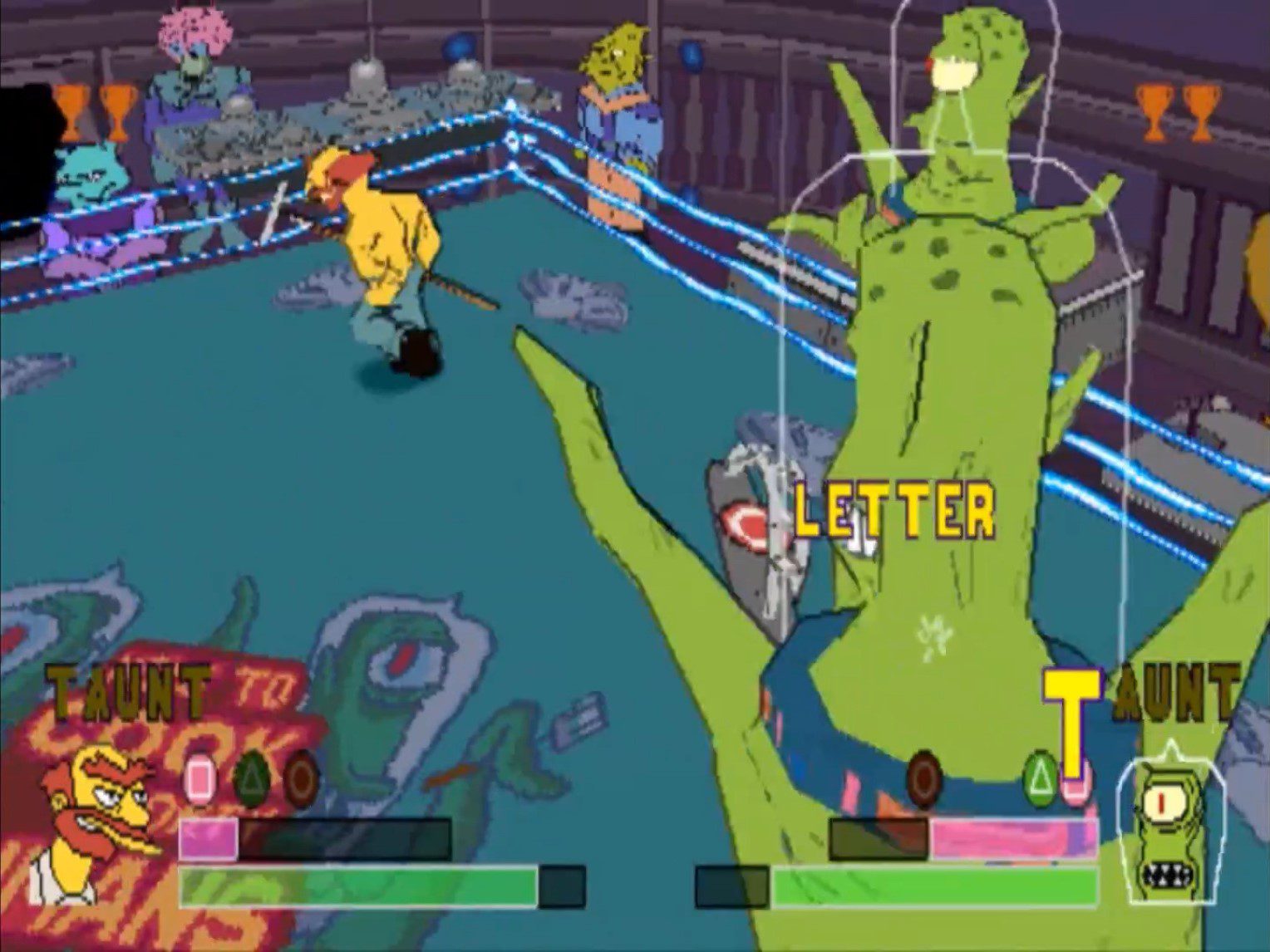 There are eight characters unlocked from the get-go; The Simpsons family, Groundskeeper Willie, Krusty the Clown, Apu, and Barney. You gain access to additional fighters by slogging through the main championship mode. To be fair to The Simpsons Wrestling, the characters have some diversity. Some. Especially when it comes to their special attacks, but the gameplay is just so all-around, old-fashioned, from the box inadequate that it doesn’t really seem to matter who you choose.

The fighting is just a lot of chasing each other around the ring, trying to land a hit. It’s more like a Tom & Jerry cartoon and less like Itchy & Scratchy where the violence was well executed and gruesome. If you score a full combo, you gain a letter on your taunt gauge, but actually doing so essentially requires the other player to sit still and take the abuse. Without a grapple system, there’s no way to get someone to park themselves, so all the characters just scoot around the arena throwing attacks.

Special attacks range from projectiles to melee flurries to traps. Since the AI is so basic, the traps are actually pretty effective if you can lead them through a cluster. The melee flurries are just a series of weak attacks, which can help if you can be somewhat effective if you corner your opponent, but otherwise, it just feels like a way of protecting your personal bubble. 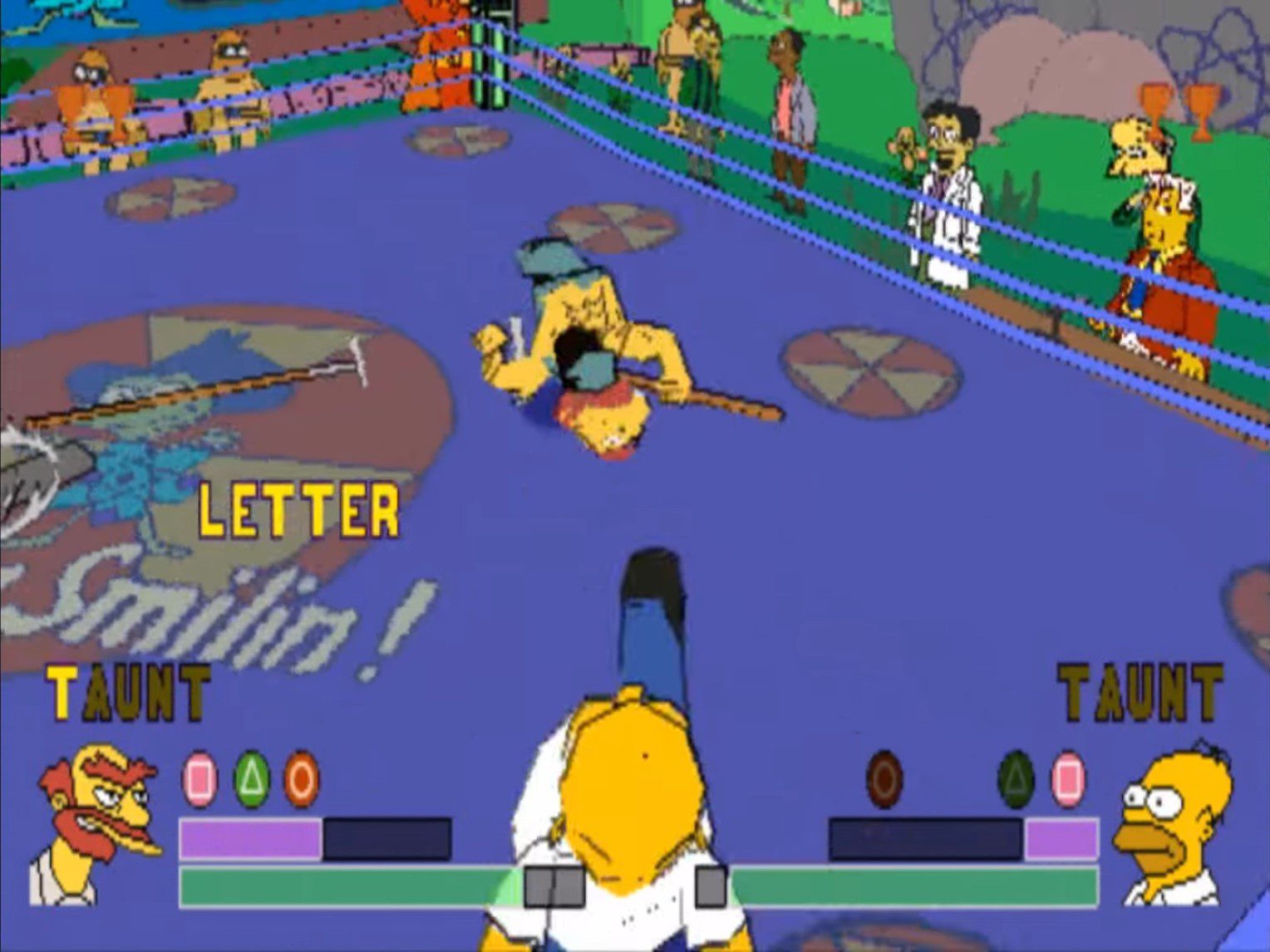 Sometimes, you can win just by mashing the square button. Just smack away at the air and wait for your opponent to just walk into your open palms. The only time you really need to employ any strategy is when fighting the bosses. They all have some rhythm to their cheating, and you have to figure that out before you can effectively combat them.

The lack of any real meat in The Simpsons Wrestling is disappointing but fine when you take your first bite, but later on, all that sawdust you’re chewing starts to stick in your throat. In the beginning, the AI barely puts up a fight, but they become much more aggressive later on. It becomes difficult to actually get a word in edgewise, and you’ll probably find yourself finding a single move that works effectively, and will use it repeatedly until victory happens.

Sometimes for me, it was bouncing off the ropes with a heavy attack. It stuns both you and your opponent, but as you score hits, the opponent’s stun starts lasting longer. Other times I just prayed that I could fill up my taunt gauge in time to pull off a comeback.

The taunt gauge can be filled by grabbing pick-ups in the environment or having the luck to land a full combo. Executing has your character spout a one-liner, then become temporarily invincible. At that point, the AI will start hopping around to keep out of attack range. It’s still a decent time to land some good hits in, which can mean the difference between victory and defeat. 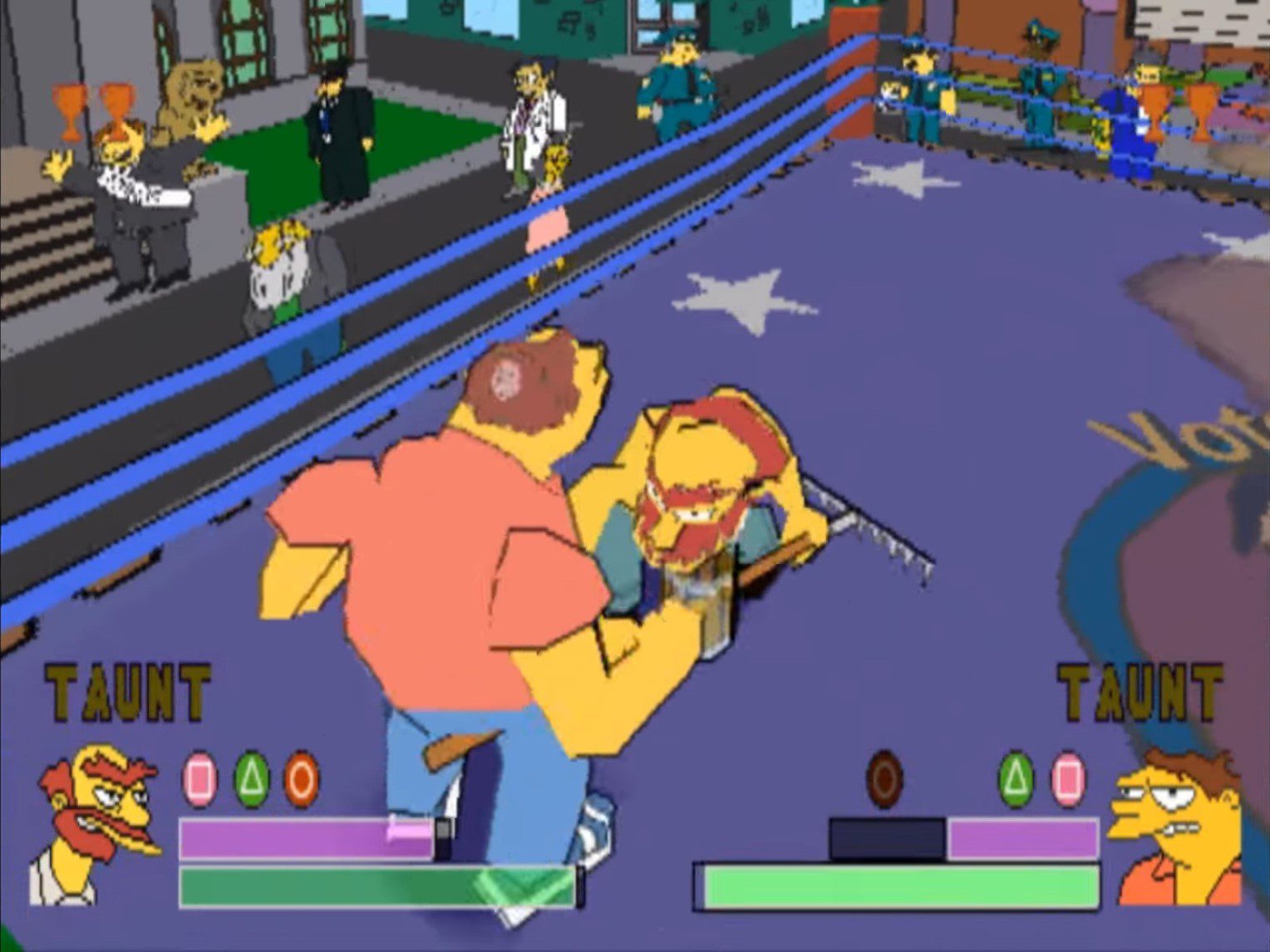 The thing is, The Simpsons Wrestling isn’t bad enough to get my jimmies in a jam. It’s an absolutely abominable game, make no mistake. It’s one of those titles where you look at it and wonder how this happened. It plays like a prototype. It’s like this was what Big Ape Productions sent to get a budget approved, and EA just published it. There’s just so little to get upset about aside from, you know, you spent money on this and it doesn’t even deliver on the single premise it promotes in the title.

I was more afraid that I’d be suffocated by Simpsons quotes repeated ad absurdum, but it never really got to that point for me. Truthfully, The Simpsons aesthetic is one of the few things the game actually executes well, even if it’s a bit absurd to see Lisa Simpson biting someone’s arm. The whole product is ridiculous, but the majority of its sins are related to its design, not the use of the license. Or, at the very least, the whole design is so bad that it makes it difficult to complain about anything else.

So, it’s not the worst game ever. It’s the sort of bad where, if you received it as a child, it’s within the realm of possibility that you could trick yourself into liking it. It’s shovelware with an expensive license slapped on. The Simpsons Wrestling is an unfocused pile of trash with no life goals or ambitions. Now. Please. I’d like to be alone with the sandwich for a moment.