What’s this week’s Kusoge doing with that chair!?

The Nintendo 64 and original PlayStation basically lived their lives during the “Attitude” or “Monday Night Wars” era of wrestling. If you’re unfamiliar, it was this incredibly tacky time where cartoonish machismo was replaced with edginess and sexuality. I’m not much of a wrestling fan, but when I do watch oiled up muscle men hug each other in their underwear, I prefer the Golden Age of the ‘80s where superheroes won out against unambiguously evil athletes using the power of believing in themselves. And steroids.

I don’t know. A lot of people really loved that era and think of it as a big part of their development, but I didn’t get into pro wrestling until, well, a few years ago when I started collecting the games on N64. I’m definitely not the best person to talk about pro wrestling, but watch me try anyway.

More than a dozen pro wrestling titles hit the N64 library if you count Japanese-only releases like Virtual Pro Wrestling 64 and its follow-up. A few of them, especially the ones created by AKI Corporation, still hold up today. The PlayStation would see its own success in its latter days with WWF Smackdown! and its sequel. This is not one of those games. 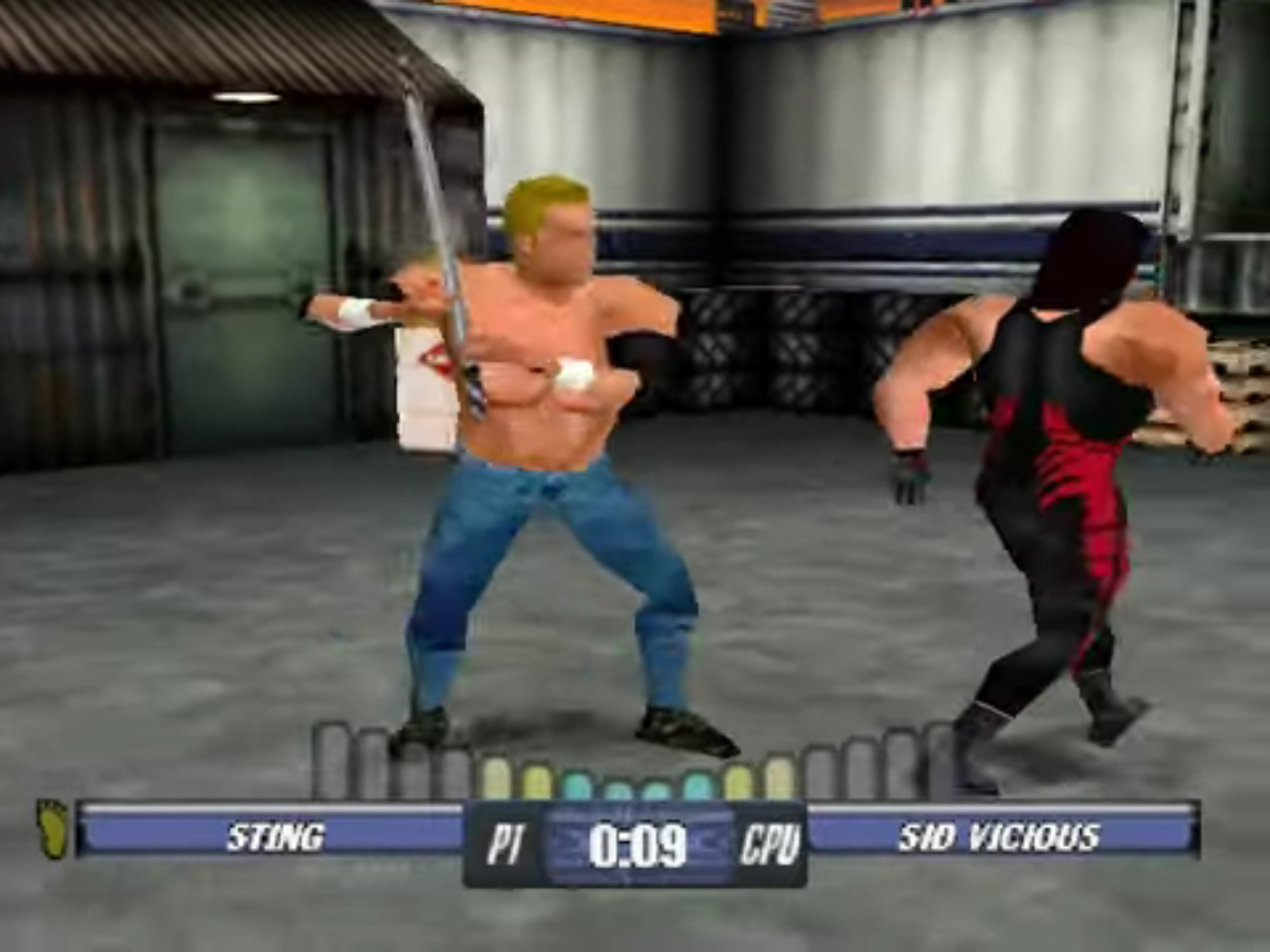 AKI Corporation did two WCW games on the N64: WCW vs. NWO: World Tour and WCW/NWO Revenge, and they’re pretty fun! But after that, they shifted to the WWF license while WCW went to EA, who had already established themselves as a big purveyor of sports titles and immediately promised to deliver a product rivaling AKI’s venerable titles. The result was WCW Mayhem, which wasn’t very good to begin with, but little did we know it was about to get worse.

As the title suggests, WCW: Backstage Assault moves all of the action backstage. All of it. There’s not a ring or a referee to be found. I never really got the point of backstage wrestling to begin with. I guess it adds to the soap opera feel when anything can happen at any time, even in the bathroom, but I feel I’ve already suspended enough disbelief when I bought into the idea that there could be evil athletes looking to control the world by means of a belt. The fact that it’s now telling me there are no rules, oh, but you can still win by pinfall is asking a lot.

The whole backstage gimmick was already working its way into games. WCW Mayhem already had it to an extent, and I guess the next logical step is to just take away the ring entirely and make everything backstage. 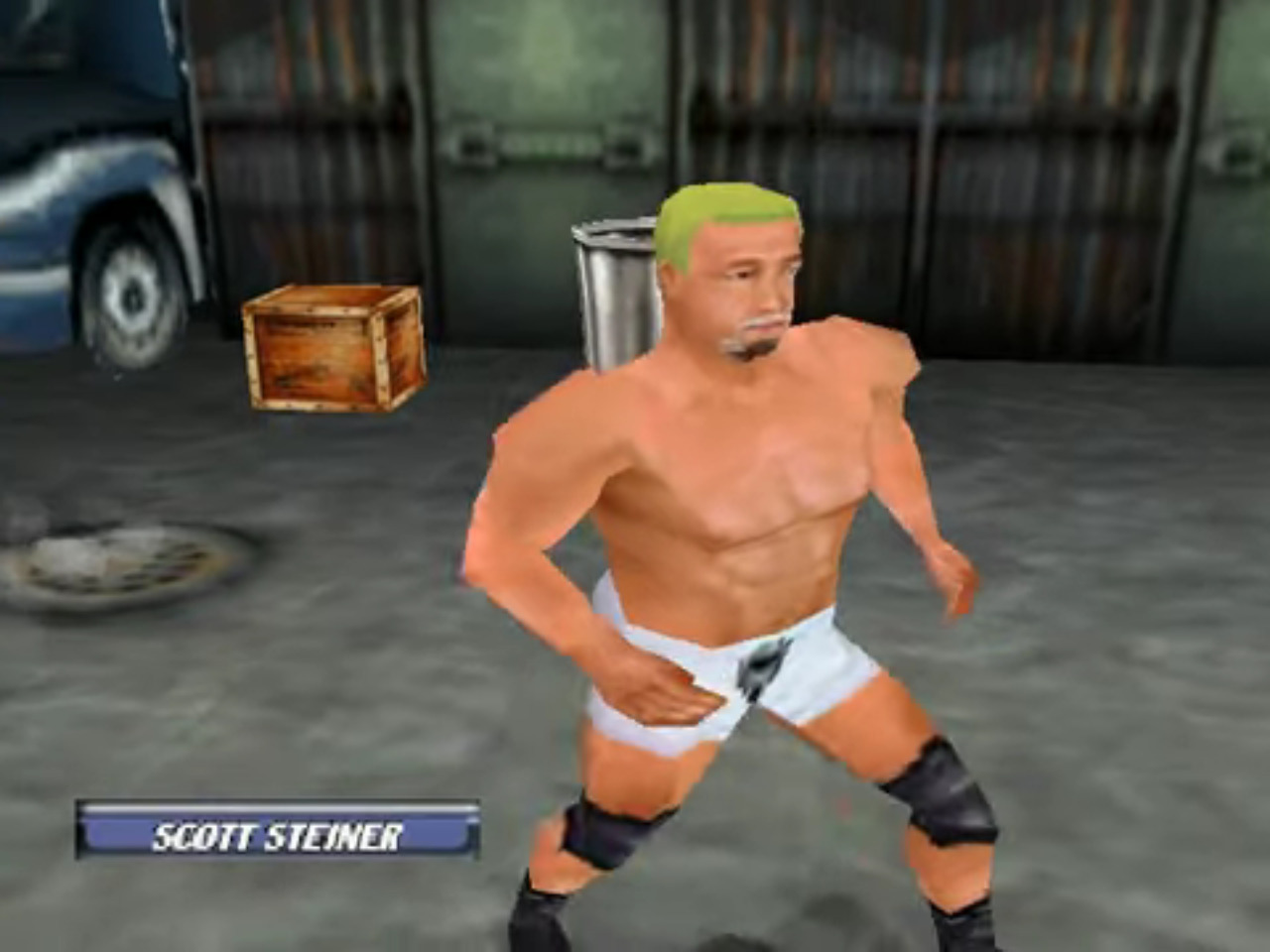 I could go on about how much I hate the Backstage Assault’s basic premise, but there are a lot of other things to complain about. Like, hm, where to begin? How about the fact that the wrestlers all look like they’re made of Silly Putty. I mean, this being the early-3D era, everything looked kind of crappy, but at least in other wrestling games, I could kind of tell who was who. Here, if you asked me to pick Ric Flair out of a line-up, I honestly couldn’t. I might be able to identify Scott Hall, but only because they pasted a greasy little strand of hair to his face. I guess Kevin Nash kind of looks like Kevin Nash, I just didn’t realize he had grey in his beard in 2000.

More than just looking terrible, they’re also pretty interchangeable. If you look at what AKI was doing, there was a big difference in how you would play a high flyer versus a monster wrestler. Here, it doesn’t really matter. I picked Jimmy Hart as a joke and he was easily throwing around Goldberg by the… hair? Every wrestler just seems to have a random assortment of moves peppered by various groinal attacks.

Maybe I should back up for a moment. I’m not the best person to explain wrestling, but Jimmy Hart wasn’t a wrestler. He was this grifter-styled manager whose shtick was to knock out officials or wrestlers with a megaphone. The only time he’d fight was mainly for laughs as he’d fall victim to his own megaphone and get his comeuppance or something. He’s perhaps not even the strangest member of the cast as Elizabeth can be unlocked, though, to be fair to her, she was sporting a more aggressive persona at the time. 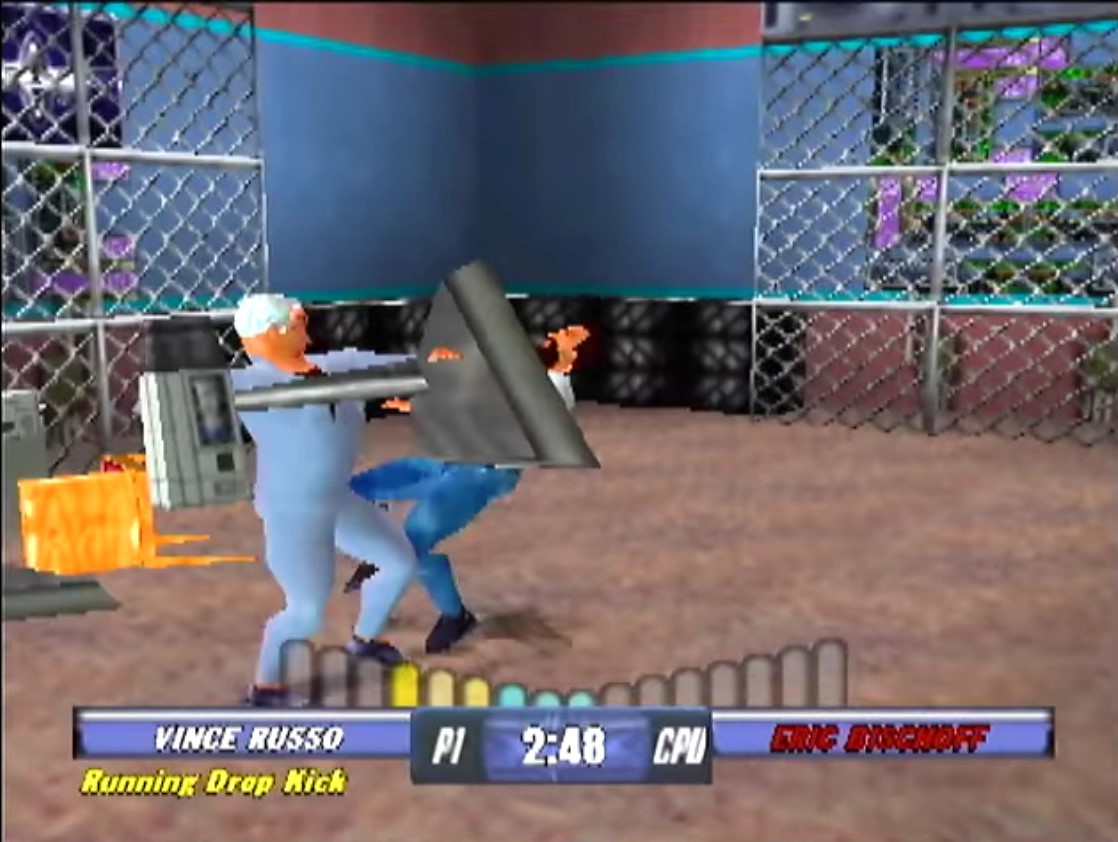 Obviously, the elevator pitch of Backstage Assault is that anything can happen when there are no rules, and that much is true! For example, your wrestler could suddenly start climbing the mesh walls for some reason. Or they could start convulsing wildly and vibrate across the floor. You can Irish whip a combatant into a flaming barrel, setting them alight, then do it again and again because fire is cleansing and this is the only way to get the voices to quiet down, if only for a moment.

Really, though, this means that you’re just going to be hitting people with urinals until they stop moving. From the lowest difficulty to the highest, the most effective way to get a fight to end is to just keep whaling on your opponent with all manner of weapons until a knockout is called. Every so often you can mix it up by climbing up on a box and then throwing yourself at them. But really, no, ditch that. Just keep hitting them with pipes. And when everything is broken in a particular arena, just throw them through an open doorway to find more stuff to hit them with.

I guess that’s one thing that’s kind of neat; all the levels are interconnected. There are maybe 7 arenas to choose from, but each one has a portal to others that can’t just be selected. Before you get too excited, however, some of them really suck. There’s one room that’s just three boxes and a bucket, meaning the only purpose it serves is to make you travel through an extra room to get anywhere interesting. 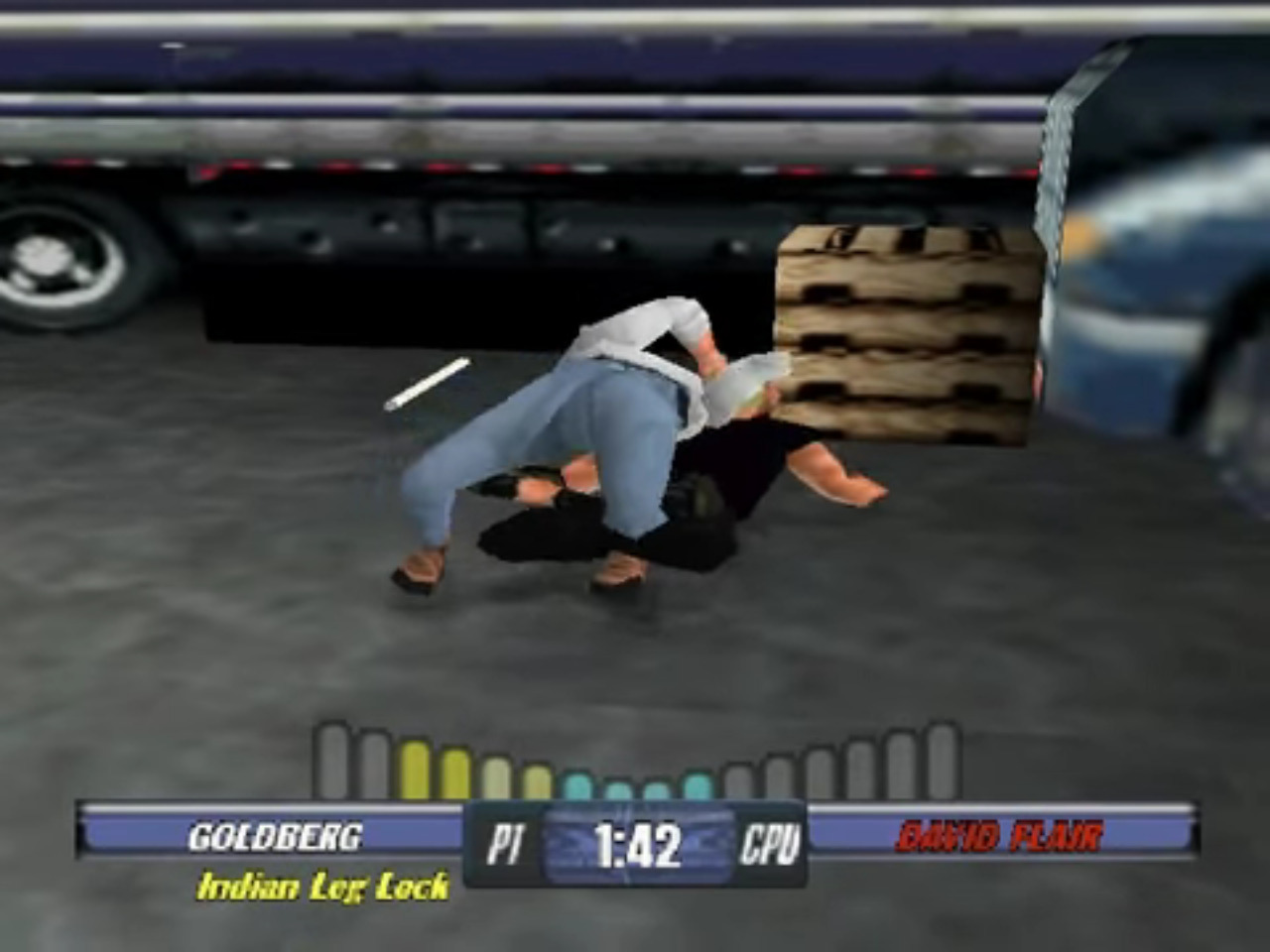 I use “interesting” lightly. All the rooms are just squared off areas filled with junk. Not that digital wrestling rings of the era looked all that great, but cardboard fans with two frames of animation are still more stimulating than tilework and tractor-trailers.

What adds to the ugliness is that each area is obviously set up to communicate the usage of each item, so things you can jump off of are all the same height, and this is especially hilarious in the parking garage where they squished down the front-end of a Jeep so you’d know you can jump off it. Actually, it might be the back end since there was a tire hanging off of it, but the point is it looks like you’re fighting in a cardboard diorama.

Did I mention that it’s 2-players only? So while the WWF titles were experimenting with ladder matches, Backstage Assault was like, “two Stretch Armstrongs in a box full of garbage; good enough.” And furthermore, this was the WCW’s swansong. Do you ever reel residual guilt about horrible games that children definitely got as Christmas presents? 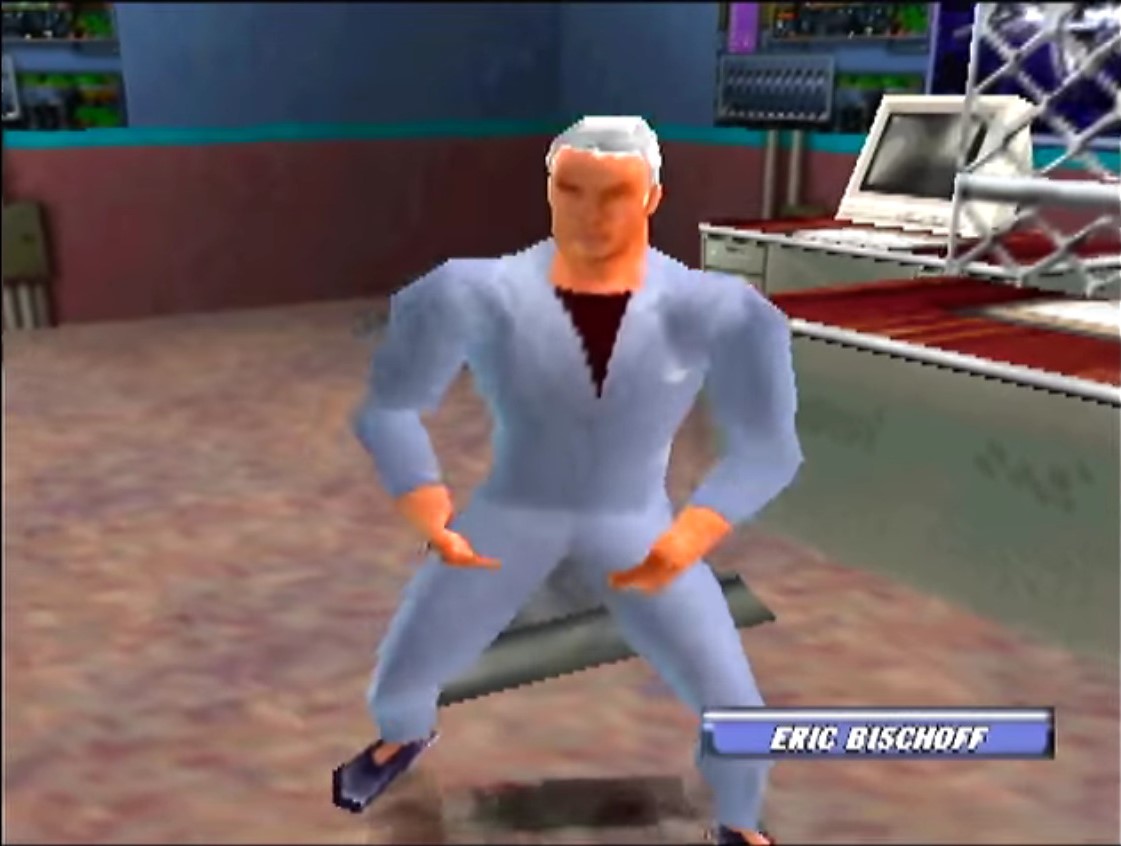 There’s also the matter of the announcers, which is a feature I usually turn off in wrestling games, but this time around, I gave into my masochism and decided to torture myself. I played the N64 version, so it doesn’t take long for the voice clips to repeat, and since they were awful to begin with, it doesn’t take long to start hurting. It’s like being waterboarded, and every time they say something new you get a short gasp of air before the torture begins anew. I don’t really enjoy Bobby “The Brain” Heenan on a good day, but it’s going to take a drill to get him saying “long, long, long time” out of my head.

Shortly after Backstage Assault’s release, the WCW was bought out by WWF, ending the Monday Night Wars, which could be considered a mercy kill since WCW was absolutely tanking. Backstage Assault would therefore stand as the last WCW game released. It seems kind of appropriate that WCW rode onto the N64 on the strengths of WCW vs. NWO: World Tour and embarrassed itself out of existence with Backstage Assault, especially when it was faced against the deadly tag team of WWF: No Mercy on the N64 and WWF: Smackdown! 2 on the PlayStation.