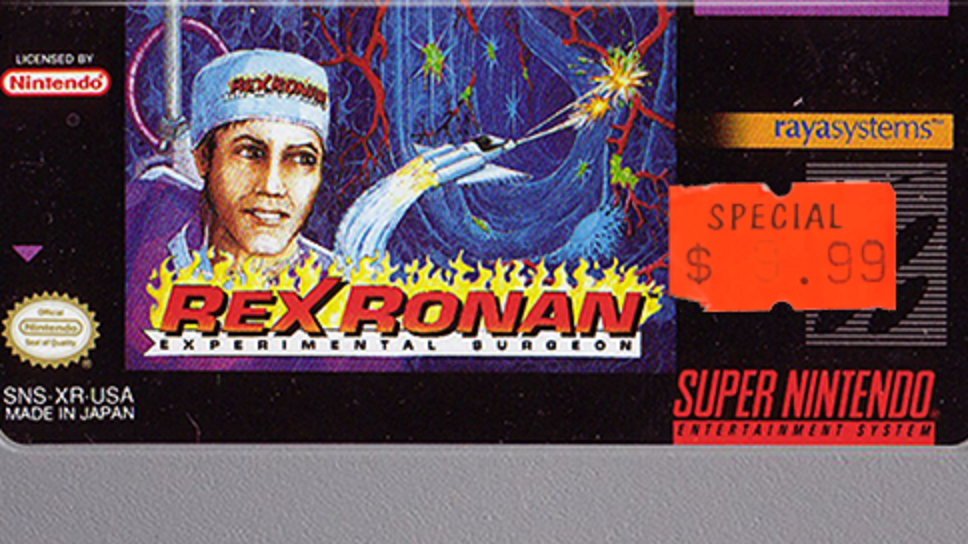 I think most people my age have a certain fondness for edutainment games. Back when Mortal Kombat was corrupting our youth and turning them into spine-ripping savages, a lot of parents and schools decided that video games could, perhaps, be harnessed for the power of good. There are some decent examples of this: Oregon Trail, Where in the World is Carmen Sandiego, Cross Country USA (or Cross Country Canada, as it was where I grew up). Then there are those we make fun of.

Raya Systems came out with a series of games on the SNES, and out of them, Captain Novolin is the one you most likely heard of. It was a game about juvenile diabetes starring a superhero with adult diabetes, and it was made to punish children with diabetes.

Raya commissioned three other lesser-known games for the SNES. They all sound hilarious, so I’m on board for any of them, but today I’ve got for you Rex Ronan: Experimental Surgeon. 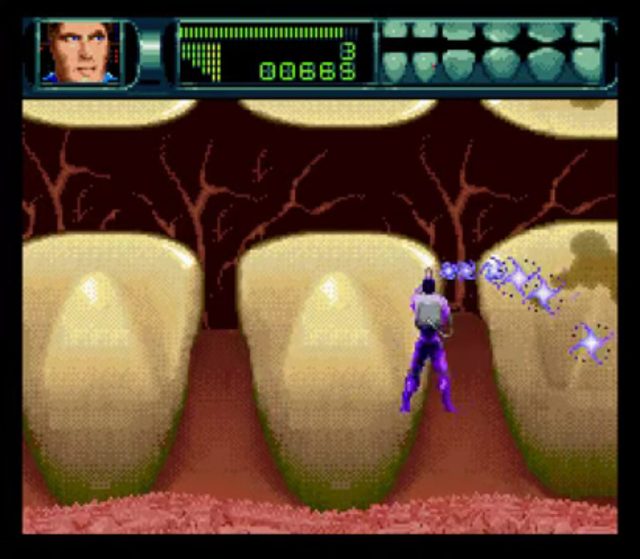 Rex Ronan is the story of the titular experimental surgeon. Today on the operating table is a tobacco CEO, Jake Westboro, who is dying from diseases brought about by a lifetime of smoking. A surgeon can’t play God by deciding who lives or dies, but children can. So to sweeten the deal, if Rex can save his life, Jake will talk about how smoking kills. This was 1994. I had already learned three things in school: Blue whales are absolute units, greenhouse gasses are heating up the Earth, and smoking kills. I’m not sure what Jake can contribute to that argument, but whatever, as long as he has insurance.

So, it’s the Fantastic Voyage setup, where the surgeon shrinks himself down to save the patient at a microscopic level. That’s the last time I’m going to bring up Fantastic Voyage, because I haven’t seen it. Most of my knowledge of it comes from that episode of The Venture Bros. 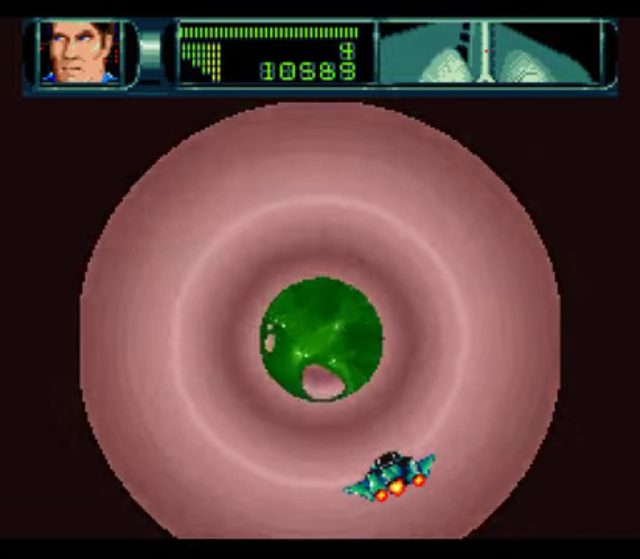 Rex’s job is to clean up all the crap that has been built up in Jake from his years of being an executive. Actually, scratch that, because I quickly learned that you can do less than a token effort and still win. Jake’s teeth are now the cleanest part of his body because I didn’t touch any of those pre-cancerous cells or plaque. I don’t get paid enough for this. Nor do I have any work ethic. Or ethics in general.

So, if you don’t actually have to remove karmic build-up from the lungs of an evil or ridiculously naive executive, what’s the point? Just to get to the end of the level. Cleaning stuff up just gets you points, and you’ll forgive me if I don’t want the title of Highest Score in Rex Ronan. There’s no bad ending, so you can mostly just go through the game letting your patient fester. 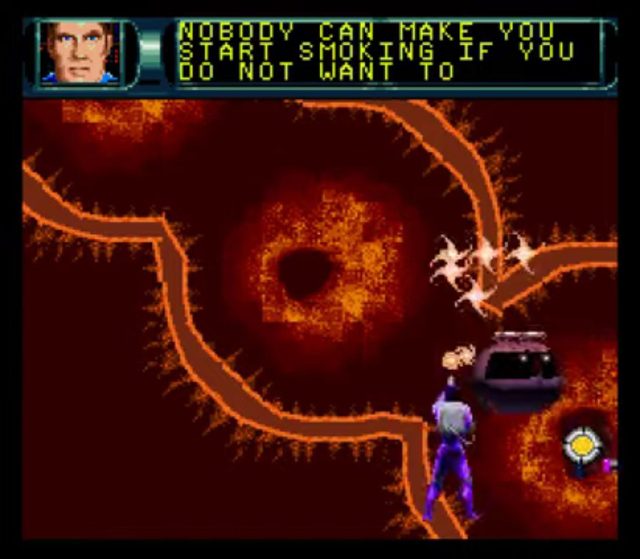 Maybe I haven’t made Rex Ronan sound bad enough, but just try playing it. It controls like a shopping cart that just hit its rebellious teen years. You have two kicks and good luck hitting anything with them. The camera manages to stomp all over one of my biggest pet peeves: It lets you get too close to the edge of the screen. Rather than keeping the camera focused on Rex, like any sane product would, you quickly scooch towards the edge, allowing you to run into enemies before you even know they’re there. If you have enough runway, you can actually push yourself halfway off the screen, and I don’t know why the universe doesn’t just intervene at the point.

There are also two weapons that you mystifyingly can’t switch between at will. No, you pick up purple capsules to change weapons, and since one of them is only good for cleaning, juggling them is… impossible. But remember, you don’t have to clean, so grab a capsule to switch your gun to combat mode, and focus on the robots.

Some missions have you flying through the body in a little ship, and while I would compare these sections to Star Fox, that would be painting too flattering a picture. they’re more like Sewer Shark on Sega CD. Thankfully, you once again don’t have to clean up all the crap clogging Jake’s arteries, so you can just avoid obstacles to the end. 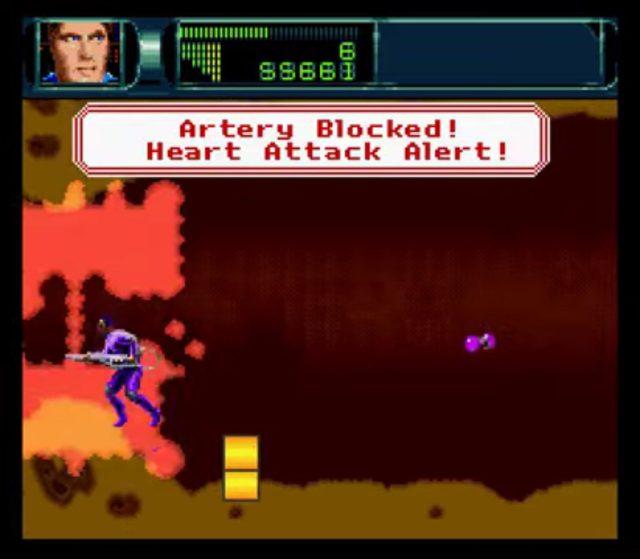 The whole educational element of Rex Ronan comes in through the use of these little quiz bombs throughout the game. They’re true and false, and if the question is true, the bomb will clear the screen of enemies. If they’re false, you’re supposed to ignore them, which means they don’t do anything.

They’re dead simple, though. If the game asks a question that makes smoking sound horrible like, “If you smoke, we are going to have to remove your jaw,” you know it’s true. If it says something less severe like, “Smoking after sex helps you reduce your erection after taking Viagra,” you know it’s false.

But then, you can also just go into the options and turn off these “smart bombs,” because what better way to play an edutainment game than to skip the whole educational part of it? 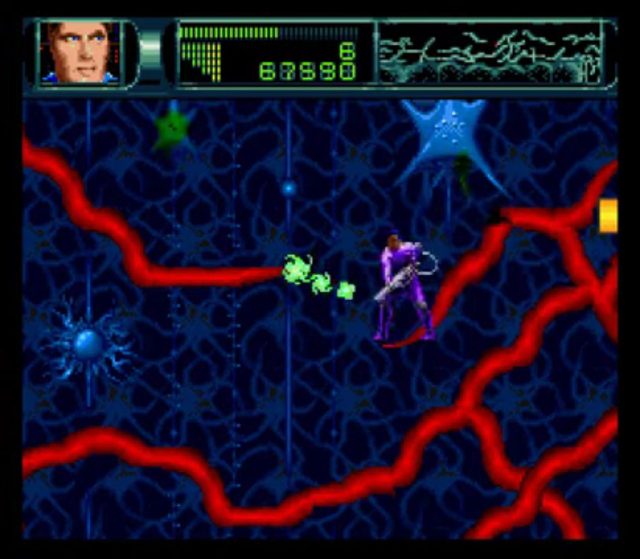 Mercifully, the game is about an hour long, which I assume is so children can finish it before their nicotine habit kicks in. You can play again if you want to try for the high score, but I already gave that possibility the finger.

I also would affix it with the word “entertainment” without including the ironic quotation marks. Most of my enjoyment of Rex Ronan came from making fun of it. I had more fun writing this article than I did actually playing the game. So, it has that going for it. And really, that’s enough to get me interested in the rest of the Raya games.