How did you miss the name Packy & Don?

When I wrote my article for Rex Ronan, I earmarked the edutainment games by Raya Systems. Captain Novolin is perhaps their most notorious title, but when I read the synopsis of Packy and Marlon, it shot up my list of priorities. You play as a young elephant with juvenile diabetes who must both scroll sides and eat a balanced diet. I don’t remember the last time a game asked me to eat a balanced diet. Surely, Yume Penguin Monogatari pulled a fast one by having me completely avoid food, but normally I’m just packing away every floating pretzel like I’ve just accepted the failure of my New Year’s resolution.

Going in, I admittedly didn’t know a whole lot about diabetes. I’ve known people whose lives have been affected by it, but never close enough that I’ve had to learn about it to assist. So, I would never make fun of the disorder, but thankfully, Packy and Marlon has no shortage of other things to make fun of. 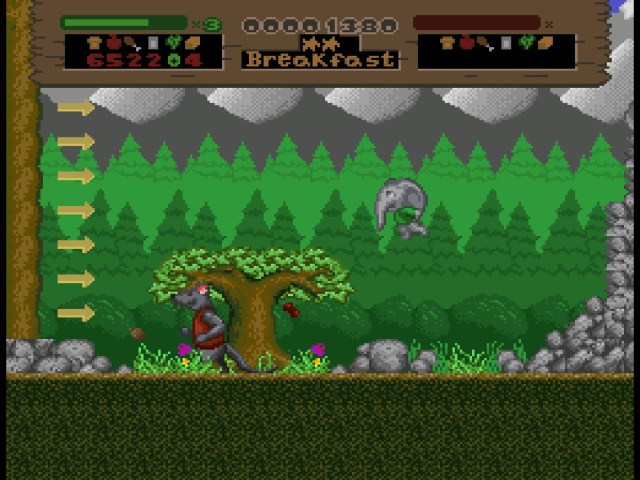 Get this, the plot of Packy and Marlon has a group of rats raiding a summer camp of all its food and its insulin supply. In my wildest imaginings, I could not conjure a villain so malicious. This is something that would give the villains of Captain Planet pause. The best I could do to compare this is a plot to demolish a cute puppy rescue and replace it with a toxic waste dump, but that seems mild compared to stealing medication from children. Were their parents killed in an alleyway by a dietician? What drives this kind of evil?

Actually, given the price of a bottle of insulin in America, I guess it’s not so far-fetched. Rats have a high rate of diabetes, and if they don’t have insurance, I suppose they may resort to desperate measures like stealing from another vulnerable group. Wow, Packy and Marlon inadvertently scored a direct hit on my cynicism with its unintentional criticism of the pharmaceutical industry. I’m both impressed and sickened. 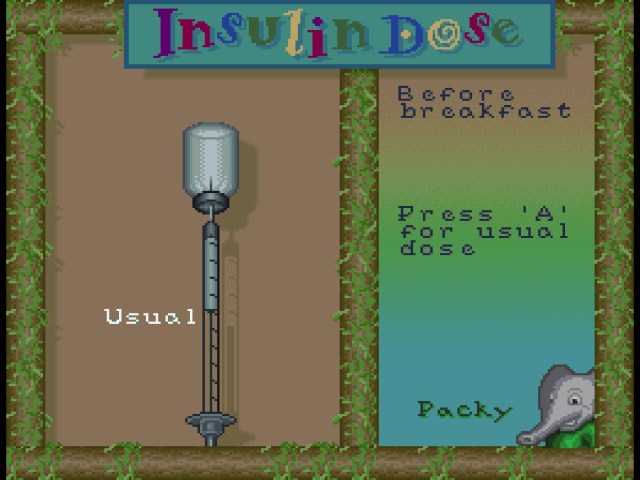 Here we have a pretty typical sidescroller. You can shoot stuff out of your trunk to kill rats, and you need to not lose all your life before reaching the end of the stage. Each stage caps off with a boss battle against enemies who have already lost the will to live. There are about a bazillion levels, which is probably my biggest complaint about Packy and Marlon. There’s a password system, however, so it’s maybe not so bad if you don’t try to cram the whole game into a Monday morning.

What isn’t so standard about Packy and Marlon is that not only do you need to occasionally take insulin, but you have to eat a balanced diet. This is also something I don’t have experience in because my idea of three square meals is a Pop-tart, instant ramen, and cured meat. Thankfully, you’re told what foods your body needs at the start of a level, which it expects you to memorize because it won’t tell you a second time.

The first time I was dropped into a level, I ignored this and ate everything. I said it before, but eating every floating snack in a side-scroller is something I’ve been carefully conditioned to do, and it would probably take a power drill to make me unlearn something like that. If you do this, you lose a life, and the game tells you to try the stage again, which I guess is better than the hyperglycemic reaction that such gluttony would probably actually cause. 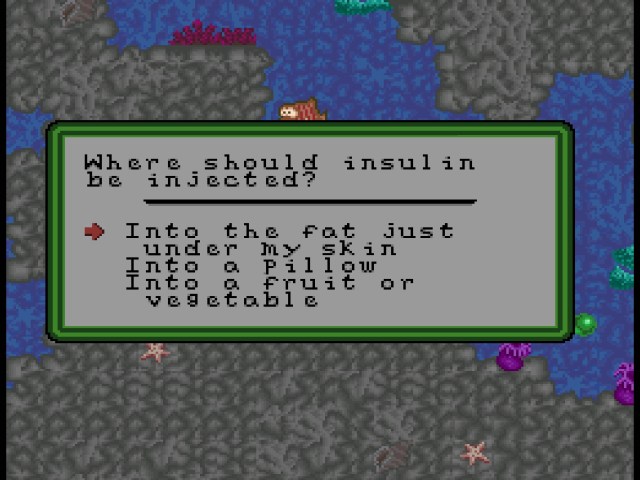 Let’s be real for a moment; while it’s not handled all that well, having to eat specific food in a stage is actually a satisfying mechanic. You’re either rewarded for your memory or simply because you’re really good at using food to make the number green. Either way, there’s enough skill involved that pulling it off feels unironically good. It makes me think of all the open-world games that have gotten “survival” modes, and it makes me think of how that could be improved if you had to survive with a disease. It doesn’t have to be diabetes. I’m mostly just saying that we don’t have enough werewolf/vampire survival games.

The level design isn’t all that bad, either. It feels somewhat thrown together and relies heavily on having lots of health pick-ups lying around, but they’re at least visually varied and aren’t too demanding. There’s a certain amount of exploration to be done, as each stage has a key item you need to pick up to unlock the boss room. The items are either placed near the exit or in a really obvious spot, so a lot of backtracking is avoided.

Like in Rex Ronan, there are quizzes that you come across; three in each level. These are optional, but you might learn something if you’re as clueless as I am. 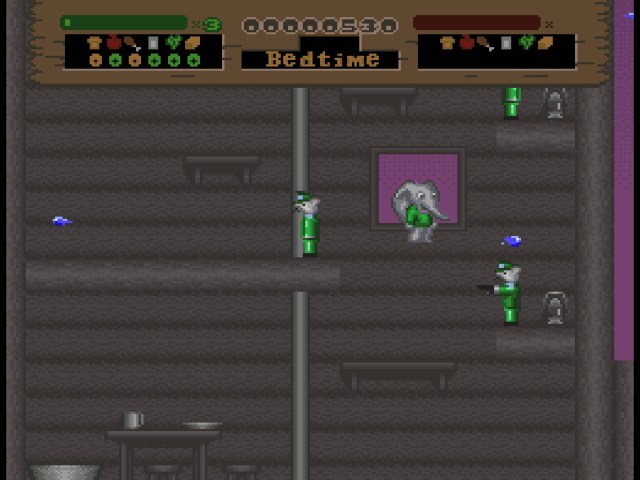 I wouldn’t go as far as saying that I enjoyed Packy and Marlon, but it’s really not egregious. Well, except for the sinfully terrible soundtrack. No child deserves that. If I was a child stuck with this disease, and my parents bought this game for me, I’d probably appreciate it. Earthworm Jim might be more entertaining, but it doesn’t help me make sense of something like managing a disorder like diabetes. It’s nice when a game does that while also not being excruciating to play.

I’ve always looked at edutainment games with a mix of respect and irreverence. For example, the Sega Master System version of Where in the World is Carmen Sandiego? is an okay teacher of geography, but then the bosses are all dudes who don’t have any qualms against shooting inquisitive children. Fantastic entertainment value, right there.

Packy and Marlon is simultaneously a tolerable game about managing diabetes and a hilariously pointed critique of the predatory practices of the pharmaceutical industry. Where else can you find that sort of subtext? That’s not a rhetorical question. The only other game that comes to mind is Theme Hospital.