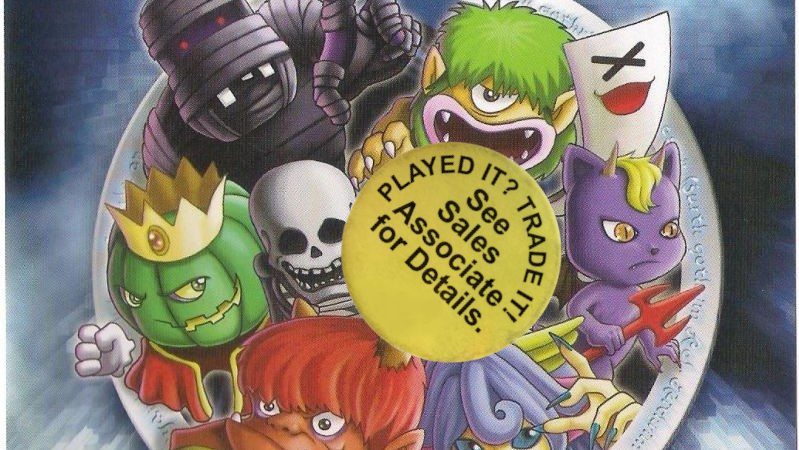 Put it back in the bargain bin

I only knew two things before purchasing 2007’s Heavenly Guardian on PS2. First, it was going to be a game in the Pocky & Rocky series, only maybe not really. It looked to be aiming more at Kiki Kaikai, which the Pocky & Rocky games are the sequels to, but I’m not going to get into the finer details of why they’re almost two separate series. The quick version is this: Kiki Kaikai is Taito; Pocky & Rocky is Natsume. Yes, this means that Pocky & Rocky with Becky is more a part of the Kiki Kaikai series.

Anyway, that’s boring. The second thing I knew about Heavenly Guardian going into it is that it’s considered to be kusoge. 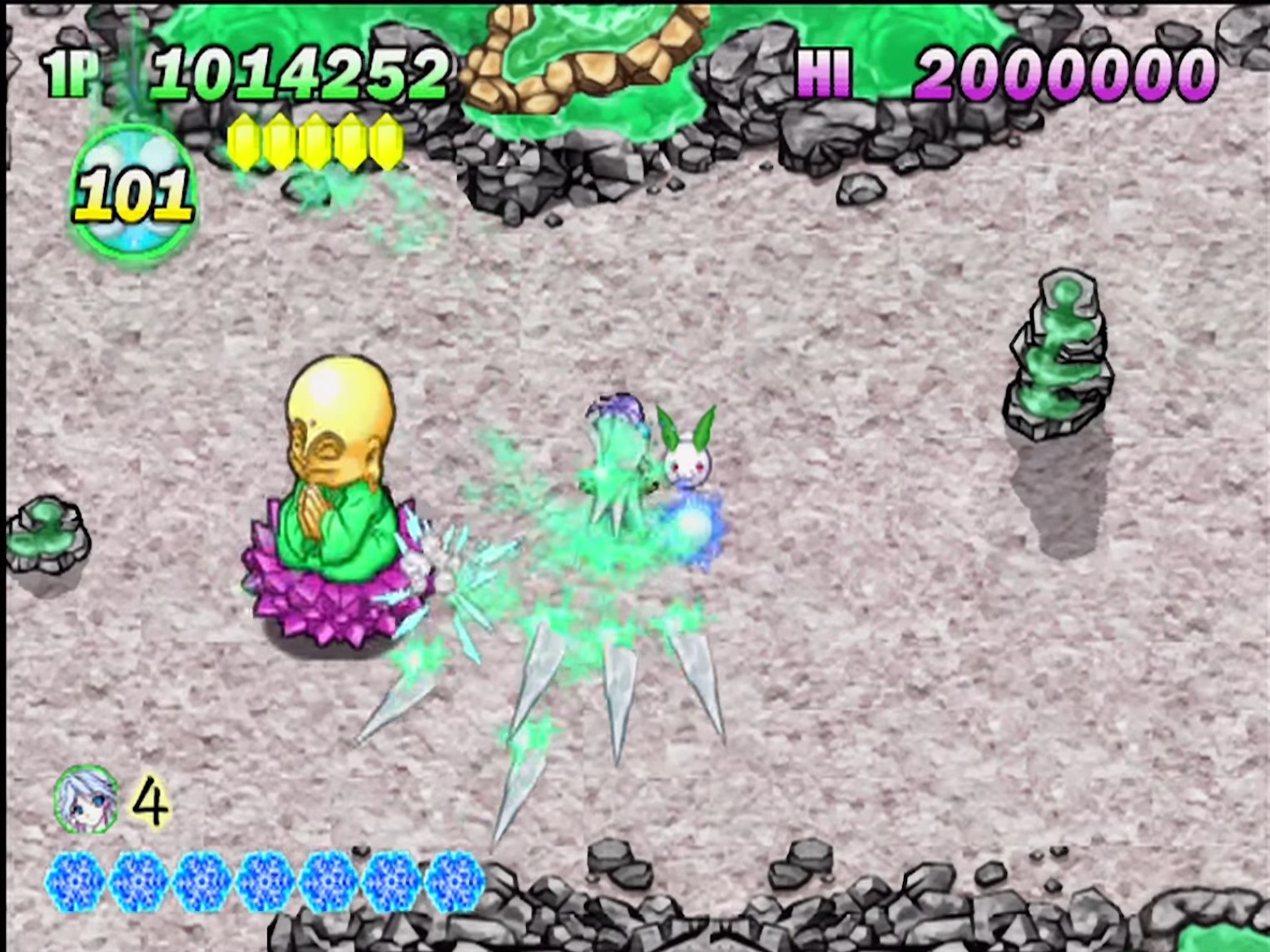 According to articles leading up to the release of Heavenly Guardian, the title was originally going to be Kiki Kaikai 2. However, Square Enix bought up Taito in the midst of development and decided they didn’t want a new Kiki Kaikai game. So, Starfish canceled it. Then they revealed Kiki Kai World, which you’ll notice is one “kai” away from copyright infringement. They insisted that wasn’t just the canceled Kiki Kaikai 2 renamed. That might be true since Heavenly Guardian does have a lot of identifiable differences from the early screenshots. However, palette swapping the heroine and dropping a “kai” doesn’t mean it’s not a little too close to an existing license. So, eventually, we wound up with Heavenly Guardian.

I raised the question of whether or not this was more of a Pocky & Rocky successor or a game closer to the Kiki Kaikai arcade game, and the answer is: no. It’s neither. It’s a mess.

Don’t get me wrong, it’s a top-down run-and-gun like the other games in its would-be series. Its influence is clear. The power-up system is similar, and the enemies are taken from Japanese folklore. It’s just a matter of flow. It doesn’t match either series. It’s not as tanuki-balls out as Pocky & Rocky, nor does it have the stiff, quarter-munching mentality of Kiki Kaikai. No, it feels more like a homebrew fangame. 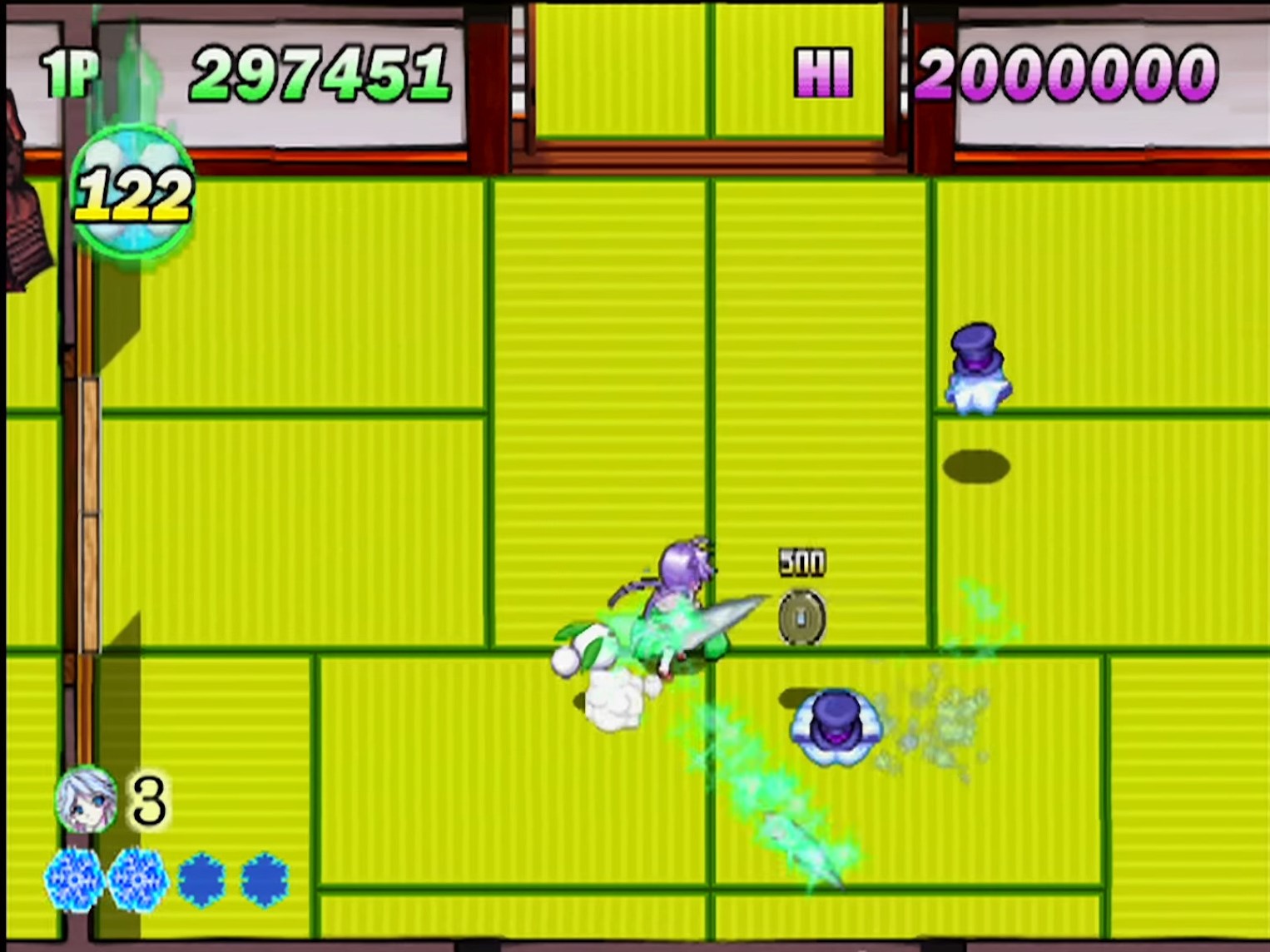 Actually, the first thing that struck me when I saw its 2D art style is those advertisement Flash games from the ‘00s. There’d be a cartoon, and to promote that cartoon and keep children looking at ads on their webpage, companies would commission little games to advertise them. It’s all smooth lines and computerized gradients. Lifeless, I’d call it, especially when paired with some pretty sparse animation.

Most egregiously, it has no real feeling of impact, so it’s not always obvious when you’re being hit or the enemy is. Pocky & Rocky had characters who threw scrolls and leaves, but it still made sure you knew when you did damage through this constant a-wok-a-wok-a-wok-a sound. There’s one boss, in particular, that has two types of attacks: one that does damage and another that reverses your controls but doesn’t hurt you. I had to keep looking at my life gauge because, in the moment, I had no idea to tell if something did damage or just reversed my controls.

It doesn’t help that the weapons feel like butt and not in a good way. You pick up gems to change your weapon, and if you pick up the same colored gem, you upgrade that weapon. This comes in the flavor of rapid, three-way, homing, and bomb. Rapid, I don’t even understand because you normally shoot rapidly. In fact, if you have a three-way, you can shoot faster the closer you get to your target. It’s the classic projectile sprite limitation. If you shorten the distance they travel, the next set can spawn quicker.

As for the upgrades, you have to squint to see the difference they make. I typically stuck to three-ways, since homing and bomb were disappointing and, again, I don’t see the point of rapid. I think upgrading any of the branches of firepower just makes them stronger, but I didn’t see any tangible evidence of that. Bosses display their health as a numeric value, and it seemed like no matter what projectile you hit them with, it always does 2 damage. So… I guess just upgrade your weapons to make the imperceptibly better. They’re definitely improved, you just won’t know how. 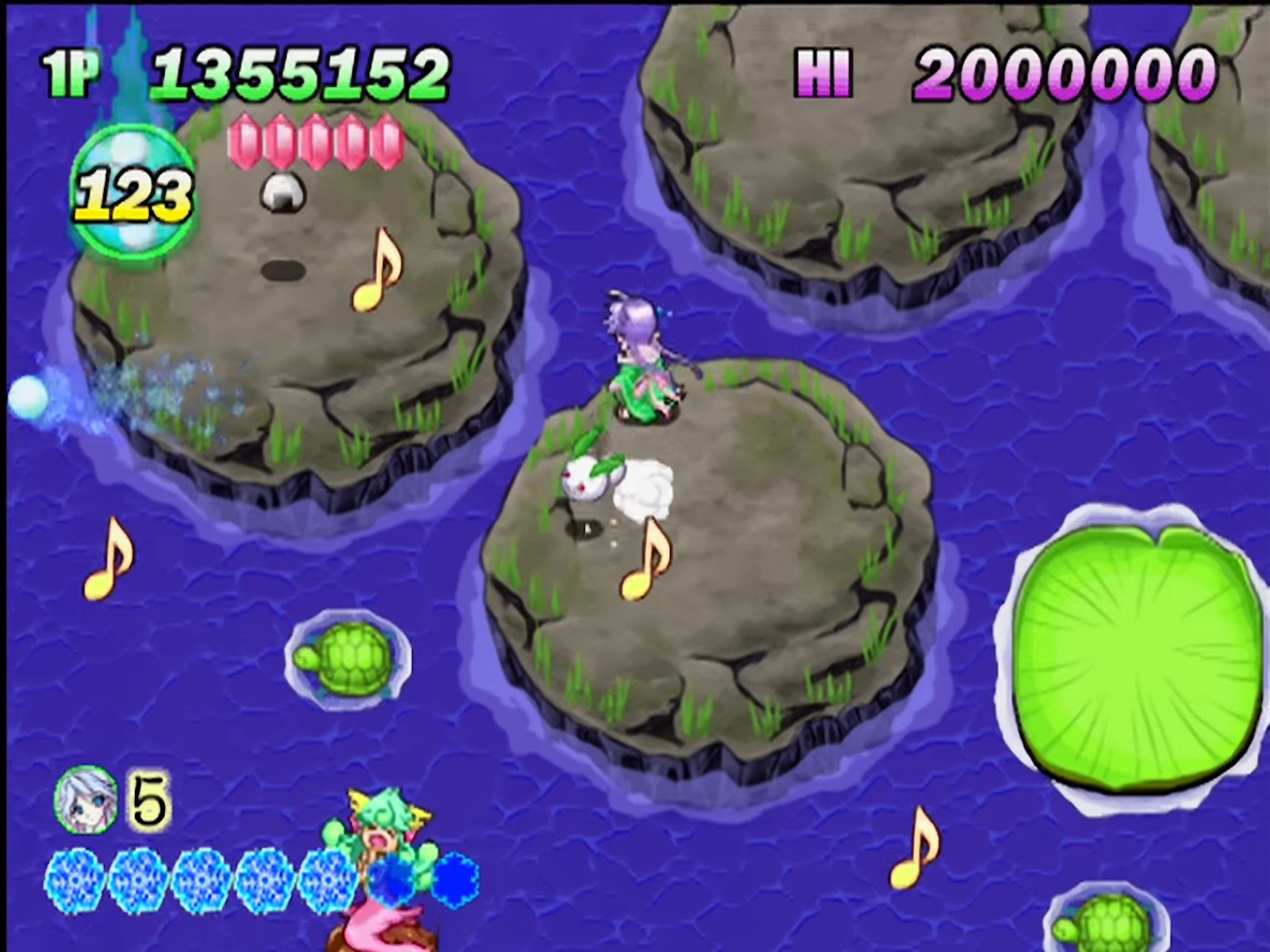 The bosses of Heavenly Guardian deserve special mention for being unexciting and tedious. If I show you a screenshot of them, they probably look all right. Then you get into combat with them and realize it’s way too easy to either cancel their attacks or find that perfect spot to sit where most of their extremely predictable attacks just go right by you.

On the other hand, they have mountains of health. I noted above that every projectile seems to do a base 2 damage every time it makes contact. Well, bosses commonly have around 400 health. Now, you don’t necessarily have to hit them 200 times to win, as your three-way can affect them three times and bomb seems to suck down a cluster of health. However, it still takes a ridiculously long time. They pull out additional attacks as their health gets lower, so try not to dislocate your interocular lenses when you roll your eyes after getting killed when they’re down to 50 health. 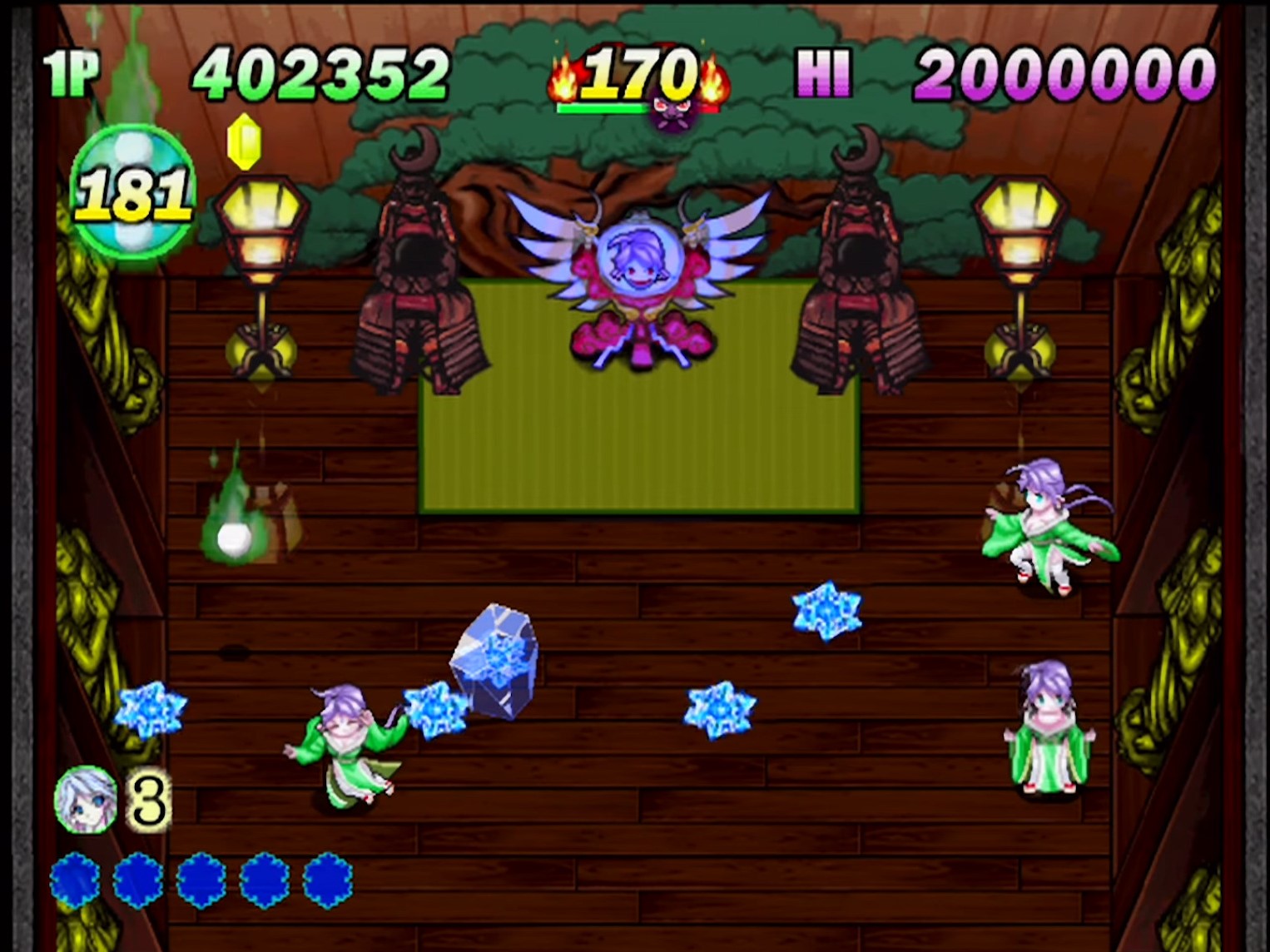 I suppose every game deserves to be available

There are a few times I’ve picked up a game I knew was poorly received and, after a few minutes of actually playing, thought, “oh no, what have I gotten myself into?” This was one of them, as even before finishing the first level, a nauseous feeling was bowling in my gut in protest to actually having to play any more Heavenly Guardian. At some point, I turned to my dog and promised that when I hit the continue screen again, I’d put the game down and walk away.

There was no such solace, as after continuing once on the first level, I never had to again. To hell with my mad gamer skills! I begrudgingly wound up seeing the ending a few hours later.

I can only imagine that losing the Kiki Kaikai license was such a blow that the lead designer locked themselves in the bathroom and refused to come out. Like, they planned on putting effort into the game, lost the license, and were just, like, “Well, let’s throw the scraps together and push it out the door.” I feel like believing that there was once passion behind this project, but very little of it shows in the final product.

Although I played the PS2 version of the game, it came to my attention that you can get Heavenly Guardian on Steam and Switch under the name Snow Battle Princess Sayuki. I find this information distressing. You should probably get Pocky & Rocky Reshrined instead.