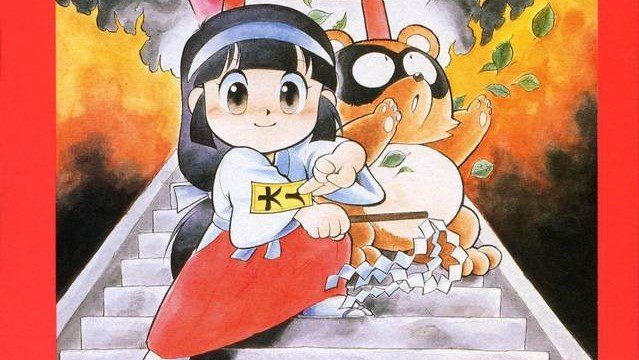 Why do the cute ones always play hard to get?

I am lucky enough to have a mother who will play video games with me. It’s always been that way. Ages ago, I spoke of our time together with Animal Crossing, but that’s just perhaps the more memorable games we shared. Really, though, we played Super Mario Bros. 3 (I made her play the hard levels, times have really changed), Donkey Kong Country, Stunt Racer FX, Paperboy 2, and on, and on, and on.

Buried way back there in the games we shared was Pocky & Rocky. We rented it a few times, but I don’t really remember getting past the second level. I also didn’t have a hope of understanding the game’s themes, but it was a lot of fun.

It would probably be difficult to convince her to jump back into it with me — we mostly stick to four-player family games like Mario Golf, Overcooked, Moving Out — so my husband has become my co-op partner. We have our games together, but I think our biggest conquest was Pocky & Rocky. 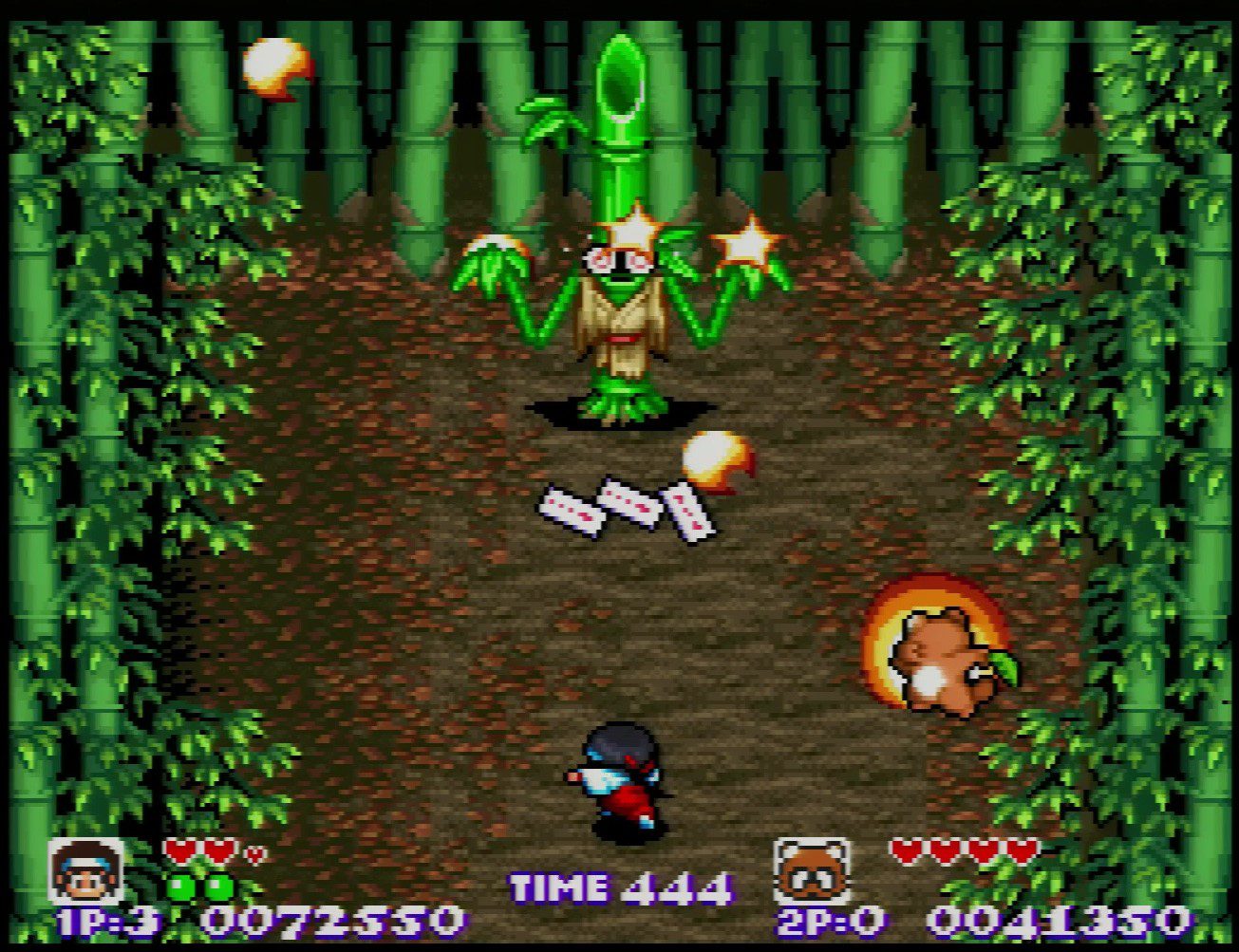 Pocky & Rocky is technically the sequel to an arcade game called Kiki Kaikai. I say “technically” because it’s one of those words that I overuse, but also because the games are fairly disparate. It’s the same idea. A top-down shooter where you play as a Shinto Shrine Maiden (or Miko) that throws ofuda scrolls at various yokai and other monsters. Pocky & Rocky or Kiki Kaikai: Nazo no Kuro Manto differs from the arcade original in that it’s more colorful and actually fun. It’s a sugar-fueled update that leaves the original in the dust.

It was also made 6 years later by a different company.

The biggest change is that there’s now co-op (though, the Famicom Disk System version of Kiki Kaikai also featured co-op), with Pocky being helped by the titular Rocky. It’s sort of a Ganbare Goemon Kid Ying and Dr. Yang butchering of the character names. Rocky isn’t even a raccoon, he’s a tanuki, but let’s not confuse the kids anymore than the pervasive Japanese visuals already do. No one can know about Rocky’s terrifying balls. 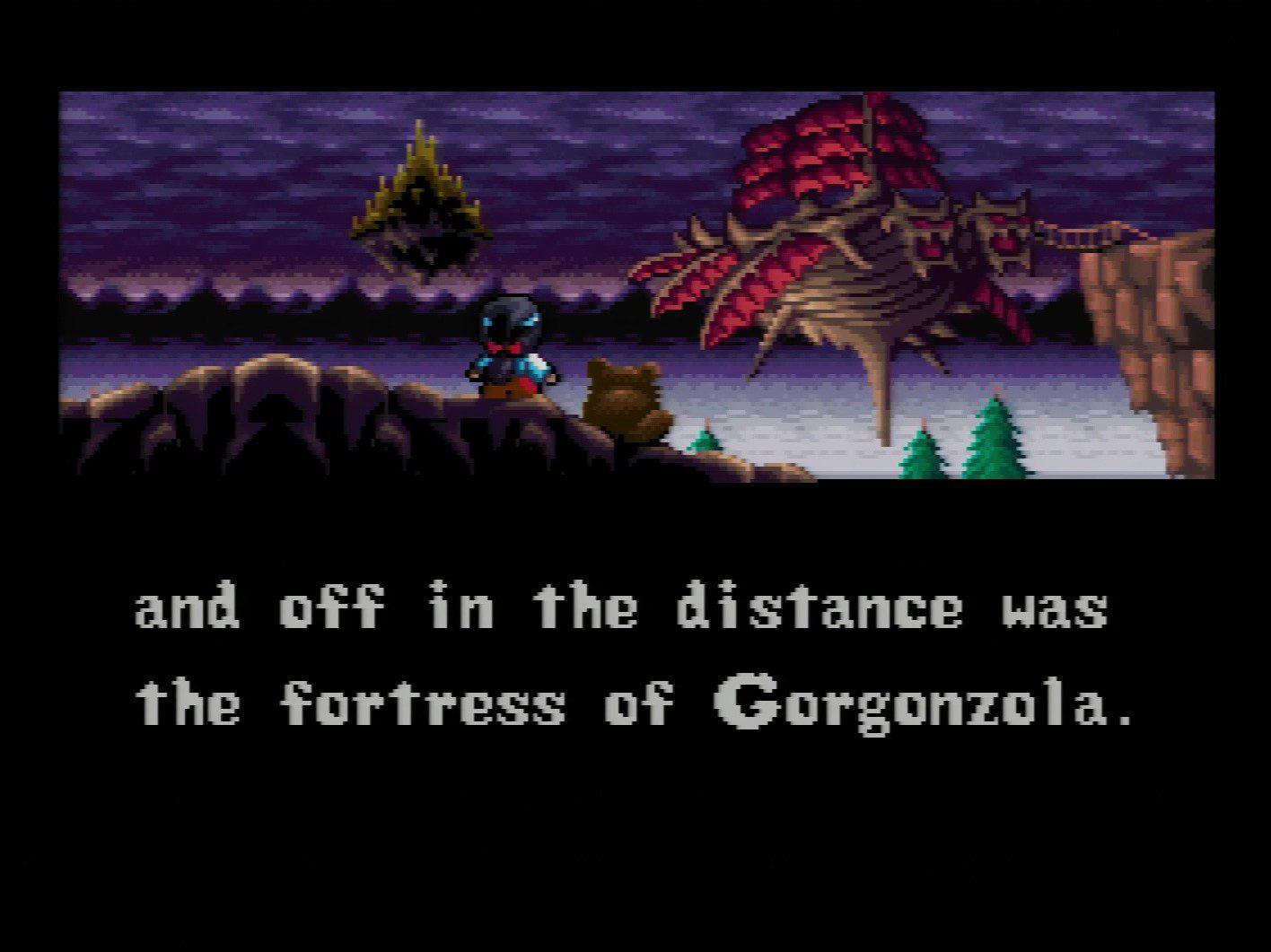 The great thing about Pocky & Rocky is its bright, expressive visuals accompanied by cute, chirpy sound effects. It’s not just a top-down shooter, it’s a top-down cuter, get it? It has all the intensity of Commando or Ikari Warriors, but most everything is smiling at you.

You can upgrade your cards in two ways, red and blue. Red turns up the firepower while blue upgrades the spread. You can’t use both, so pick one and avoid the other. You’re also given the ability to slide on your belly to avoid attacks or sweep with your tail or heisoku to destroy projectiles. There’s also the obligatory screen-clearing bomb. It’s nothing groundbreaking, but it’s a solid foundation to build upon.

In fact, it’s fair to say that nothing in Pocky & Rocky was very innovative, but it’s the application that counts here. The game is adorable from tits to toes. The yokai that litter it are wacky and cute, and while there are definitely some darker designs within, there’s nothing too intimidating. Its traditional Shinto aesthetic is also a bit of a draw for anyone who digs Japanese folklore. 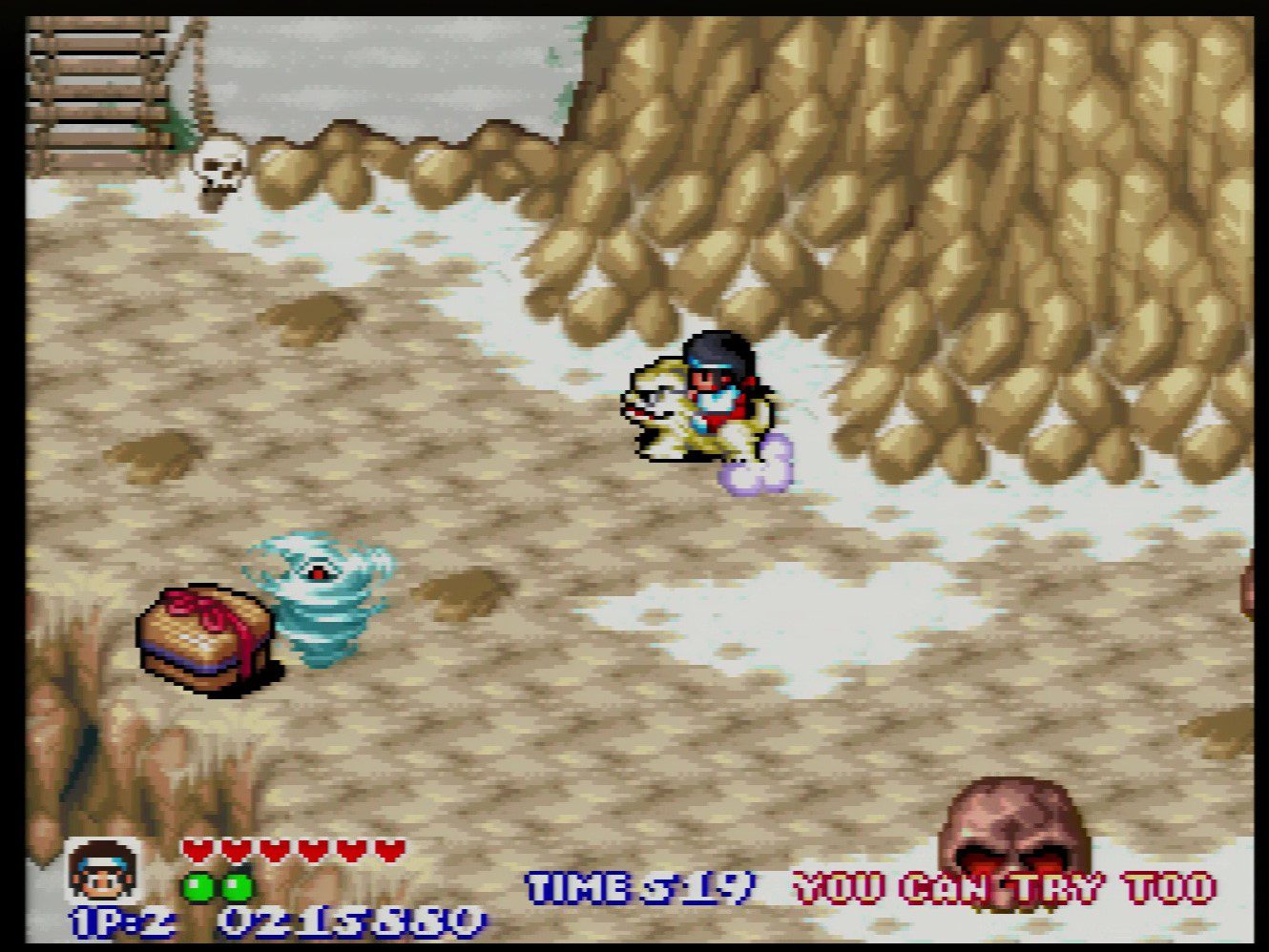 Don’t get me wrong, however, Pocky & Rocky is tough as nails. Natsume had a contest where you could send proof of completion and receive a t-shirt and certificate. Well, my husband and I did that, can we have our bragging rights, Natsume? I don’t see an expiry date on your “Game Master Challenge” and I have video evidence.

It’s not even unfairly tough. Your continues aren’t limited and you have a health gauge. It just constantly throws stuff at you until you’re worn down and finally blow it. Do you save your bomb until the boss? Will you even survive that long?

The whole game is a challenge, and it ramps up quickly. Like I mentioned, I don’t remember beating the second stage as a child. There’s six altogether, and it can be an endeavor to see the end of them. 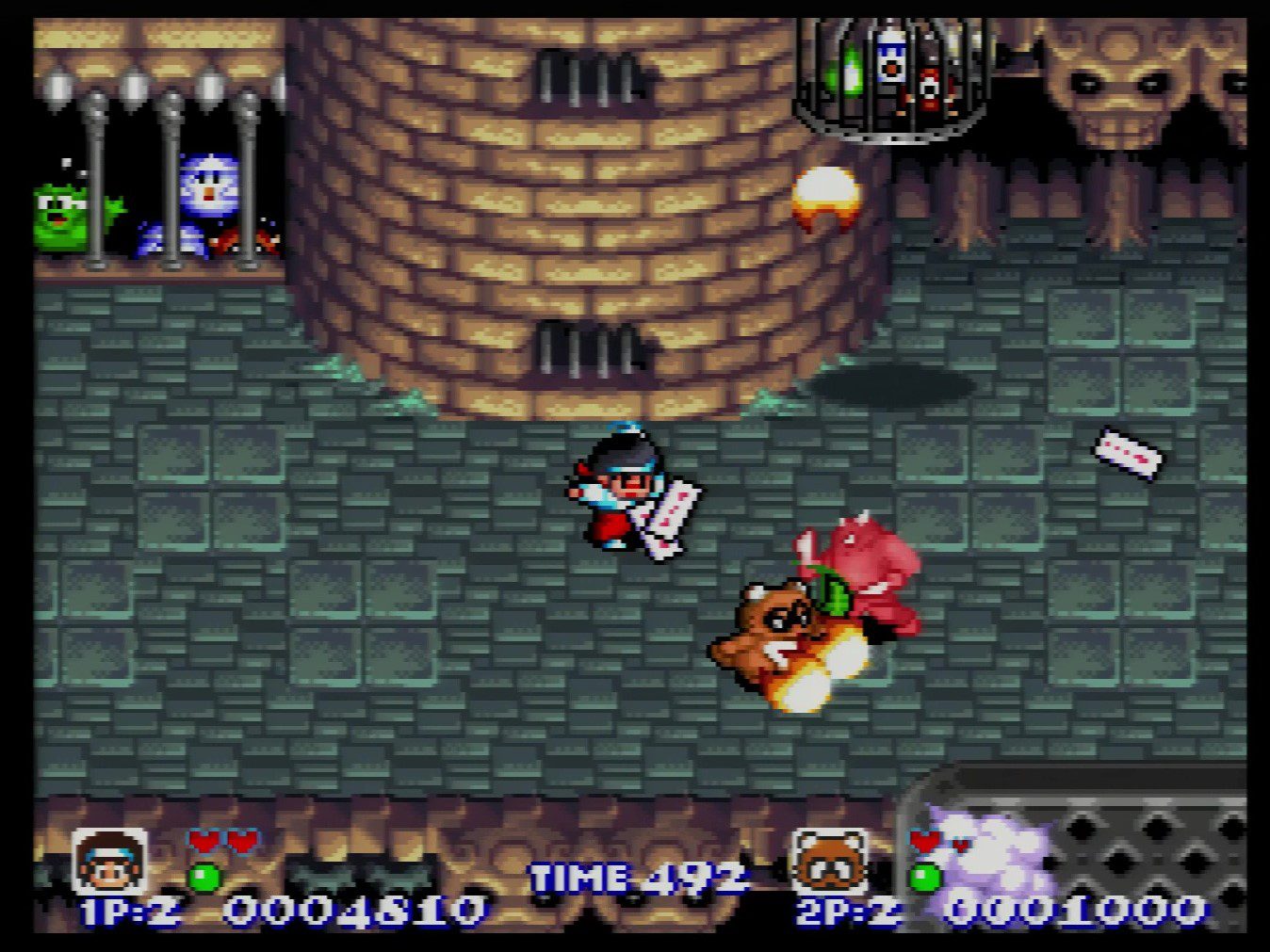 There was a sequel, Pocky & Rocky 2, that was decent fun, but I don’t think it managed to meet the standards of the Natsume’s first attempt, but it was close enough. Then the GBA got Pocky & Rocky With Becky, and that is a lot closer to the arcade original and kind of sucks. The entire localized series is ridiculously expensive these days.

Fear not, however. Natsume has a new one coming our way with Pocky & Rocky: Reshrined, which promises to return to the roots of the first (Natsume) title. It looks like a quasi-remaster in the vein of Wild Guns: Reloaded. I couldn’t be more excited. Hopefully, this will also mean a re-release of the original versions, as Wild Guns wound up being dropped on Nintendo Switch Online some time after the remaster. The game is too excellent to be entirely lost to obscurity.