Jeff Shiefelbein (the human pictured above) has been working on haunted houses — which, in conversation, he simply refers to as “haunts” — for 15 years. Inspired his family’s love of Halloween, throwing elaborate holiday parties every year, Shiefelbein found his passion and creativity for making things go bump in night.

“It’s not, obviously, like Christmas,” he says of Halloween, “where you’ve got Santa Claus and you put up your decorations. [With] this you can be creative and come up with different things, different costumes. And I think that just kind of held onto me, and I just went from there. It’s kind of what sparked my creativity to do this.”

While Shiefelbein is hired year-round to revamp scare-attractions around the United States, his creative mind led him to start his own haunt, Sinister Pointe in Brea, California. This October, Sinister Pointe will be home to the Silent Hill Haunted Attraction, based on the videogames and film, in conjunction with Konami Digital Entertainment.

We caught up with Shiefelbein to see how he got hooked up with the Silent Hill franchise, and to find out just how many changes of underwear you should bring to Sinister Pointe.

After the popularity of the Saw Haunted Maze (based on the Lions Gate films), Shiefelbein and his team at Sinister Pointe probably could have had their pick of properties to play off of. But after being approached by Konami, he says there was “an immediate kind of attraction.”

“We had a lot of opportunities and options,” he admits, “but we just felt that Silent Hill just seemed to really fit the profile of the perfect haunted house.”

While Shiefelbein says he’s familiar with two of the games and the film, the assistance from Konami was invaluable in bringing the series to life. After some back and forth with the game’s publisher in determining the key elements of the series to be included in the limited space and time frame of the attraction, they were able to narrow it down to its core.

While he won’t give too much away about what scares lurk inside the maze, he says fans of both the games and the film should find them familiar and equally frightening. 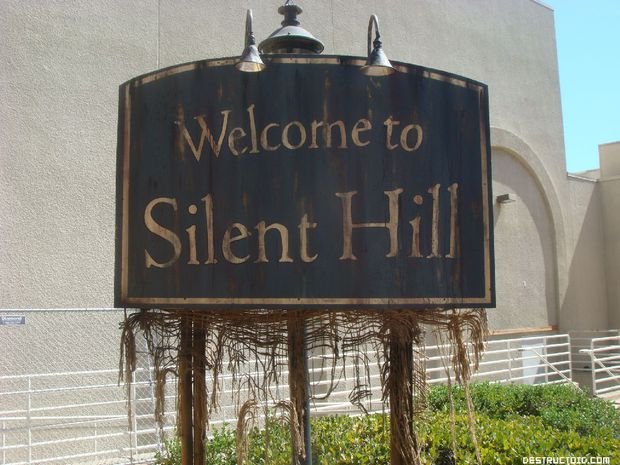 “We have a few surprises that we did pull from both the movie and the game,” he hints without giving too much away. “I think when people enter, even though there’s not an absolutely specific scene that they may recognize, they will recognize a lot of the sets, and they will realize [it] when they’re walking through. Whether it’s a hotel or maybe a bedroom, some of that stuff will be recognizable from both the videogames and the movie.”

He also tells us that key characters and enemies from the games will make an appearance, including the iconic nurses and the lumbering Pyramid Head.

“We will definitely have those characters within the maze,” he says. “[We’re using] both actors and actresses, and props that are all combined to create some of these characters.” 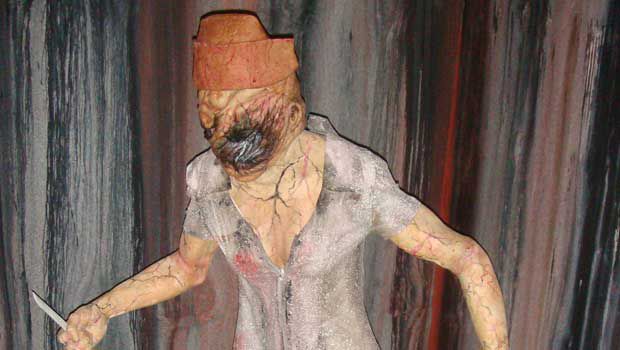 But Silent Hill is not only about its frightening denizens or its uncomfortable, claustrophobic and dingy locations. Much of the series’ atmosphere can be attributed to the sounds, as well as the haunting soundtrack written by producer Akira Yamaoka. The Silent Hill Haunted Maze combines sound effects and music from “almost all of the games,” as well as effects from the film.

“Once you enter,” he explains, “even with your eyes closed, you’ll definitely feel that you’re in it, you’ll know where you’re at as soon as you start hearing the music.”

How long it’ll take someone to navigate the haunted halls of the Silent Hill attraction will largely depend on the individual. Apparently — surprise! — it’s scary; Sinister Pointe’s Web site goes out of its way to discourage people with heart conditions and pregnant women from entering. Shiefelbein says the average person will take anywhere between 10 to 15 minutes to make it from beginning to end, but depending on your constitution, that could vary wildly.

“Whether they’re really scared and crawling and falling on the floor,” he says, as if this is something he’s seen happen before, “it’s going to take them a little longer. As opposed to some people who will literally just book right through the thing, and not even stop for a second to even look at anything.” 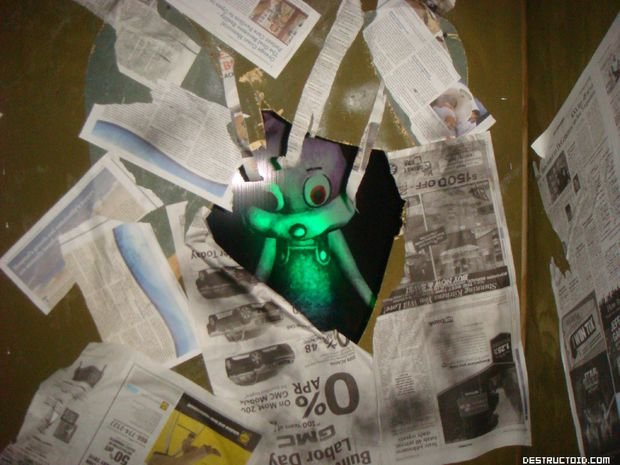 For now, Sinister Pointe’s Silent Hill haunted attraction can only be found in one place — Sinister Pointe in California. But for those in other areas of the country interested in the scares, there’s hope… it all depends on the haunt’s success.

“Again, I feel that Silent Hill has ‘haunted house’ just written all over it,” he says. “I think it’s the perfect haunted attraction. There’s no reason why we can’t continue growing with this and implementing the other movie that’s coming out, the other game that’s coming out.”

The Silent Hill Haunted Maze opens this Friday evening, and runs throughout October. More information can be found at Sinister Pointe’s official Web site. If you go, let us know if you find yourself crawling on the floor or dashing towards the exit with your eyes closed.