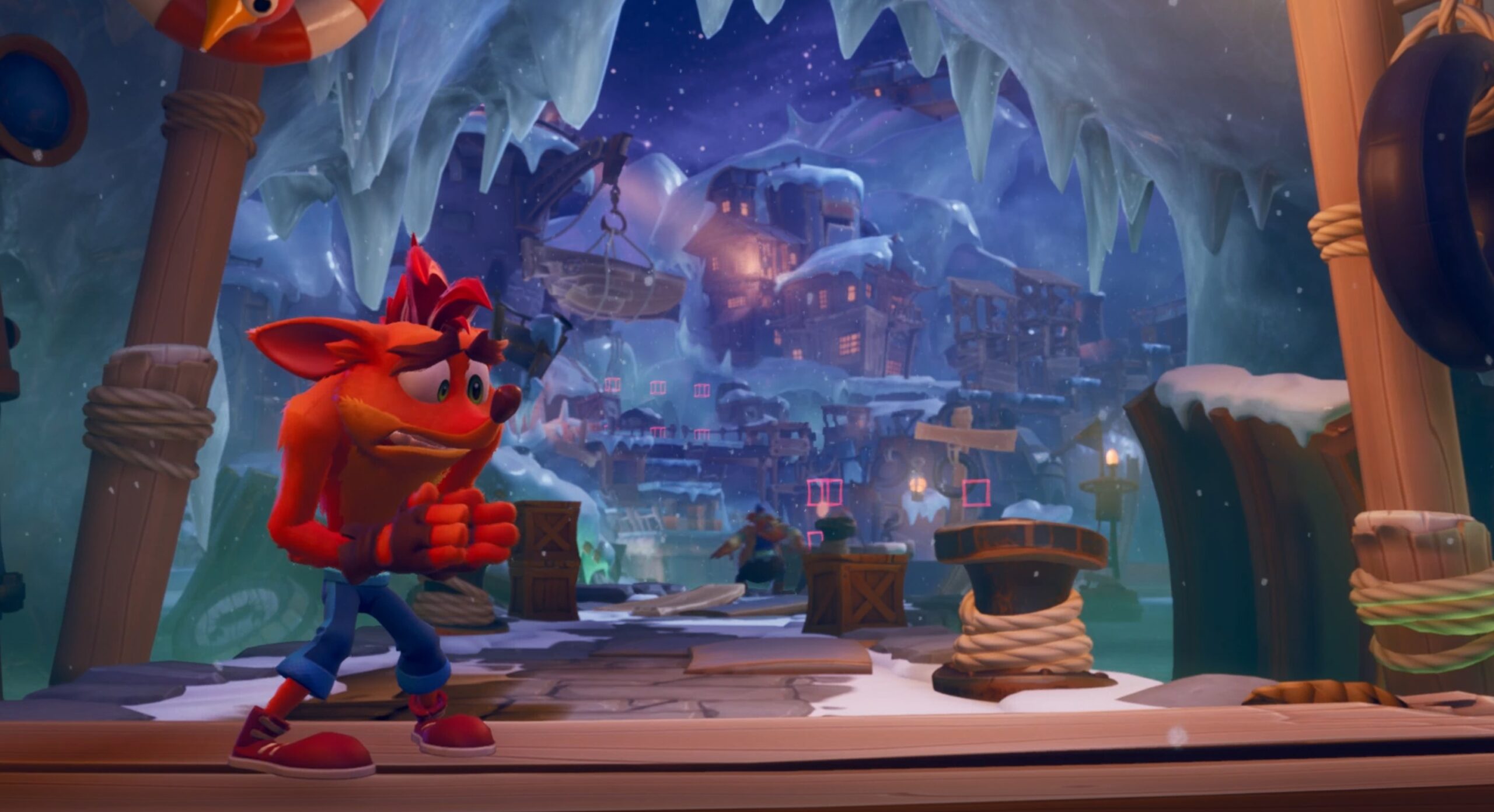 It’s good to see Crash Bandicoot back in the saddle again.

After a long hiatus, the mechanics of the remaster trilogy proved that Crash could not only be relevant in the platformer space, but the boisterous sales also proved people wanted to see him succeed.

Destructoid had a chance to try out a playable build for Crash 4: It’s About Time, and I have to say, as a Crash fan: things are looking up for the October-bound platformer.

In lieu of an “E3 appointment” so to speak, Destructoid was invited to a virtual press tour of Crash 4 with developer Louis Studdert, as well as access to a hands-on demo of three levels: Snow Way Out, Dino Dash, and Snow Way Out [Cortex Timeline]. You can get a general feel for each stage in the video below.

Although Studdert was quick to note that the team lovingly recreated the veneer of the Crash of old with Crash 4‘s aesthetics, he explained that Toys for Bob wanted to go for a “brand new art style” to differentiate the latest entry. The art team apparently looked at the original animation from the trilogy to nail down the physical characteristics of Crash himself, as well as the fluid animation style. Studdert says “you’ll see that especially in idle animations and even the staple death sequences the series is known for.” He also adds that Toys for Bob aims to “bring you to unique areas you’ve never seen before in the series.”

Snow Way Out, the aforementioned first level of the demo, really emphasized that grand scale he was intimating. One of the first things I noticed is the perspective of the stage itself, with a large emphasis on the sprawling snow village in the background. The “newness” of Crash 4 also makes itself known mechanically pretty much right away, as the Kupuna-Wa “time stop” mask is available near the start of the level — and again periodically throughout. For those of you who missed the launch announcement, new masks will join Aku Aku, who previously provided Crash with extra hit points during levels.

Kupuna-Wa allows you to slow down time momentarily with the press of a button (Triangle or R2), which has a neat cooldown trick to it. In short, you’ll use it to traverse fast-moving platforms, as well as trigger timed boxes that you can smash for power-ups or bonuses. All of this is tutorialized implicitly without the need for an annoying on-screen text box. I also learned that for the most part, masks are non-equippable items that come and go during specific guided portions: so no sequence breaking or cheesing sections with them.

The second demo stage of Dino Dash focused on Lani-Loli (a phasing mask) and the infamous chase sequences the franchise is known for. This gimmick is a bit simpler to understand and is found in all sorts of platforming games: you simply press the mask button to phase certain objects in and out. Dino Dash felt a lot more “comfortably Crash” overall, which has its trade-offs. Hopefully there’s more of that aforementioned newness and grand scale that Snow Way Out showcased. Crash 4 will also embrace the whole “multiverse/timeline” theory from the narrative in a clever way. You’ll interact with that process with optional challenge levels, which focus on additional characters like Coco and Cortex.

These provide backstories on events from the main game from a new perspective. We were able to play the alternate Snow Way Out stage with Cortex, who can change the state of enemies with his gun (turning them into solid blocks or gelatin to bounce off of) and dash, but not double-jump. He’s just different (and snide) enough to feel unique, but the main draw seemed to be the completely reworked level design that focused on more precise platforming. For reference, Studdert says that “the entire game can be played as Coco, which is very important because we wanted her to take a more prominent role in the story.”

All of these stages will be playable with “modern or retro” modes, which basically translate to “standard” and “hard” respectively. Modern provides players with infinite lives (counting up the deaths as they come) and deaths will result in a quick restart at a checkpoint. Retro mode limits the number of lives you control: like a classic platformer of old. Life crates return though, and in modern mode they’ll grant you 25 Wumpa Fruit (Crash Bandicoot‘s version of Mario coins) instead. Studdert confirms that you can swap between both modes at any time and they do not impact ratings or the game at large.

Toys for Bob is still being coy about a few things, though. When pressed about a multiplayer component, Studdert said that a “possible couch-mode announcement could come in the future.” The three stages we tried out had some pretty tricky portions for sure, but Studdert ominously claimed that “[Toys for Bob] are creating devious ways to challenge OG Crash fans.” He also answers the age-old question of whether or not this was built on the back of the previous remasters, confirming that the “entire game was built with Unreal 4 from scratch: there is no code re-used from the remaster trilogy.”

It’s early yet, and Toys for Bob made sure to stress that this wasn’t a final version of the game, but the physics system was a bit wonky at times (as was the trilogy), particularly when controlling Crash. There’s plenty of time for tightening things up, but I felt like a few sections lacked the precision I desired (specifically when jumping around).

Still, Crash Bandicoot 4: It’s About Time looks and sounds like classic Crash. I’ve put my trust in Toys for Bob for ages (since the original Skylanders in 2011 to be exact) and it’s paid off.