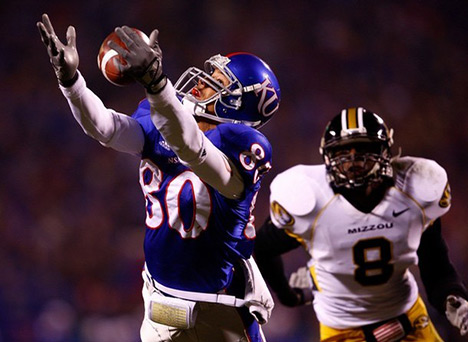 Kansas Jayhawks wide receiver Dezmon Briscoe has had a kick-ass season, racking up 78 receptions for 1,206 yards and 12 touchdowns (including three straight 100-yard games). How did he do it? No, he didn’t study game film, like most football players do — he merely played hours of Madden NFL 09.

When the Kansas City Star asked what helped Briscoe improve his game the most this year, the sophomore specifically cited the 20th iteration of EA’s football franchise: “I’d have to say the updated Madden 2009,” since, in last year’s game, “they didn’t really roll their coverages as much.” [Ed. note: rolling coverage is when a defense moves the positions of its defensive backs after the snap to try and confuse the offense.]

Briscoe seems to be quite impressed with EA Tiburon’s new defensive AI, and he truly seems to believe that his own on-the-field improvements are, in part, due to the large amount of time he spent with the game:

I mean, I play Madden a whole lot … They roll their defenses now. The game systems these days are just crazy. Me playing Madden, it helps me read the defense on the field.

So instead of heading to the film room, he hangs out in the dorm room of his best friend and teammate, running back Rell Lewis, where Briscoe uses the Oakland Raiders to win games of Madden 09 (side note: the Raiders? Hah!).

I was a bit turned off by the way the article itself was written. The author, one J. Brady McCollough, takes the usual outsider position of videogames are worthless, going so far as to call Briscoe a “weirdo” and his Madden gaming “rubbish,” never entertaining the thought that the young standout receiver could actually be serious (though Briscoe admitted his coaches would probably think he was “crazy” if he told them). You can almost picture the incredulous father rolling his eyes, but to me, this doesn’t seem particularly out of the ordinary. What about you?