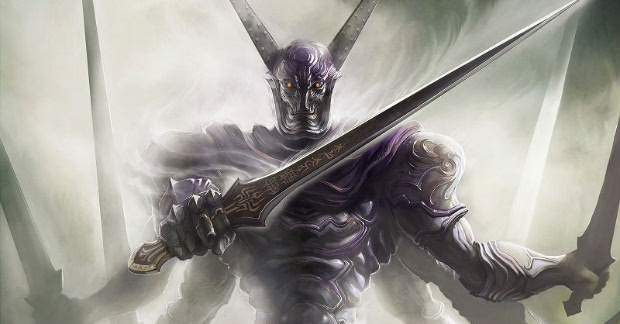 If you’re still not excited about Think & Feel‘s Blood of Bahamut, publisher Square Enix is trying to remedy that with a new gameplay trailer, titled “Special Trailer Vol. 4.” That’s probably some sort of garbled translation of something way more bombastic in Japanese, but I guess you take what you can get. Since I wasn’t aware that there were three other Special Trailers, I took the liberty of embedding all four below the jump. Each one of them introduces a different boss character.

Blood of Bahamut is a multiplayer action-RPG, but it will be hard-pressed to shake the comparison to Team Ico’s Shadow of the Colossus. The game is set in a city that has been built on the back of a huge creature, called a Gigant. When the city gets attacked, the Gigant wakes up, and its up to the protagonists to defend their city. Battle consists of breaking the Gigants’ armor and hitting their weak “core.” Think & Feel have confirmed that there are over 130 missions in Blood of Bahamut. There also seems to be quite a bit of Final Fantasy crossover: Shiva, Ifrit, Fenrir, and Bahamut have all been revealed as Gigants.

The game has an August 6 release date in Japan (what game drought?), but no word of a North American or European release. When this game was announced, there was speculation that it might be related to Bahamut Lagoon, a 1996 SNES game developed by Square. Blood of Bahamut director Motomu Toriyama even worked on Bahamut Lagoon, but I think it’s pretty clear that these two aren’t related in any substantial way.