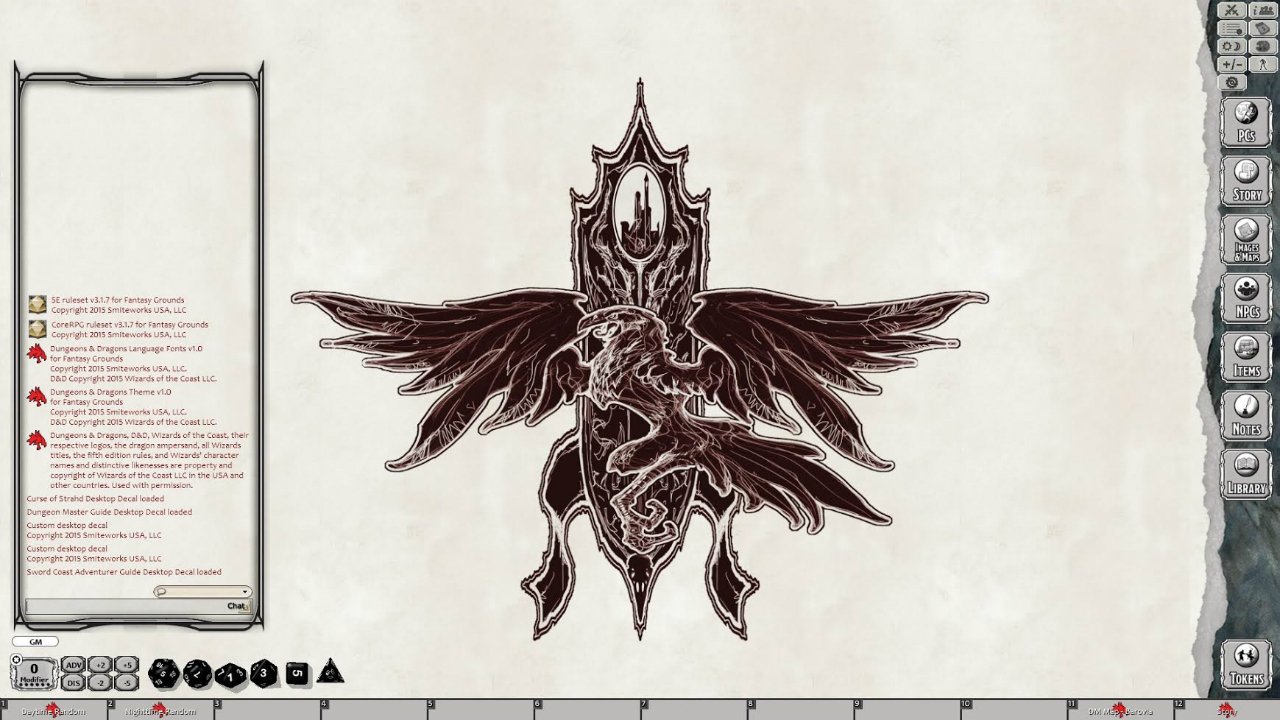 Cutting out the extra work

Over a year ago, I started writing about video games here at Destructoid. Since I had been playing a ton of the pen-and-paper-RPG Dungeons and Dragons, and digital games owed so much to that series, I figured I would attempt to write about that as well.

It hasn’t worked out so well thus far. Roleplaying with a group of best friends can be a transformative experience that smiths memories as real as any physical adventure, but it also comes with its own set of constraints, namely time and organizing multiple schedules. Syncing up multiple people’s time and expectations to align about as perfectly as the planets required to summon an Elder God is difficult, and trying to reliably write about that and relate it to you is its own challenge.

So when I heard about Fantasy Grounds, a virtual tabletop program that’s designed to facilitate long-distance roleplaying games, my ears perked up. My players were close enough where playing virtually seemed unnecessary, but a program where I could organize and collate everything I needed from the Dungeon Master’s Guide to whatever adventure I was currently running sounded perfect.

Fantasy Grounds may at first seem unwieldy and expensive, but like a magical sword, its worth becomes increasingly apparent with each successive swing. Please don’t take my lunch money.

Just look at that image and try not to get overwhelmed. There are dice, a chatbox, a map, a combat tracker, an NPC list, and character tokens up, and this was just a fraction of the features that I played with. I’ve been using Fantasy Grounds for the past couple months to DM Curse of Strahd for my regular group of players, and I feel like I’ve still only scratched the surface of what it can do.

We’ll start with what I used it for the most often: cross-referencing. If you pay for the licenses for each book (boy oh boy we’ll talk about the price eventually), you can check for rules, spell effects, monster stat blocks, or anything else you could ever think of in seconds, all in one place. That alone is a huge boon that’s demonstrably improved my sessions. Thumbing the Player’s Handbook each time you want to resolve a spell effect can slow down games considerably, so games felt punchier when I could bring them up on a whim.

Since Curse of Strahd can be overwhelmingly open-ended, I assigned certain regions to the hotbar on the bottom so that I could refresh my memory or bring up maps anytime my players wandered into a new area. That hotbar is incredibly convenient, as you can drag and drop anything you want into each one so that you have it at the ready. It fills up quickly, but you can also hold CTRL, Shift, or ALT to bring up another full bar, which leads to smart organization depending on how you want to customize it.

The maps themselves are beautifully scanned in from the books, though they aren’t scalable so zooming in causes all sorts of artifacting. What particularly helped me is that there are small pins in each room that when clicked on bring up the information that pertains to that area. With Strahd, this made it so that I didn’t have to memorize every single room in each dungeon, and was therefore less stressed about my players going into areas that I wasn’t familiar with. Absolute knowledge of a dungeon is still preferable, but since time for studying the book is already limited, having this knowledge at my fingertips was instrumental in quicker prep times for impromptu adventures.

Again, this was all with me using a laptop during a live session instead of playing long-distance games with others. There are a billion different things you can do when playing online with friends, like using that chatbox to share languages that only certain players know (instead of having to walk a player away from the table to give them private info), or using the combat tracker to log combat. I was rolling real dice at the table, but the combat tracker is a powerful piece of calculation. Just like the hotbar, you can drag and drop any monster or attack and drop it into the combat tracker to expedite the process.

In online play, you can add fog of war to the map to prevent players from seeing entire dungeons and metagaming, and move tokens around that represent each player or NPC to wherever you want. Depending on how you prefer to play (with maps or more theatre-of-the-mind-style), there are ways to make it work.

So I mostly love Fantasy Grounds, but there are two caveats. The first is that it can be tough to learn how everything works. There’s no integrated manual when you buy a license, so figuring out how hotbars and integrating each book can be initially overwhelming. However, there are a couple of resources that can make sense of things. First, there’s the online manual here that helps a ton. There are also video tutorials that made the program click for me (though the voiceover is amusingly quiet). You can learn how to make this all work with some referencing, I’d just recommend that you make sure you’re nice and comfortable with the program before starting a game with your friends and being completely lost.

The other caveat is that the pricing structure can be daunting, making it seem more expensive than it truly is. There are two types of licenses: regular and Ultimate. The regular one allows you to be a player or a DM, but your friends will also have to get a license to play with you. This costs $3.99 per month or a flat $39, with that monthly fee not counting towards the full price if you ever decide you want a full license. With the Ultimate license, players can connect to you without ever paying for a license. This costs $9.99 a month or $149. That’s without the Player’s Handbook ($49.99), Monster Manual ($49.99), or any other supplements you might want. Adventure books cost $34.99 new, which is actually cheaper than the books when they release.

It might initially seem like you’re getting nickeled and dimed, but if you don’t own the books and go straight into this method of paying, it’s not all that bad, especially if you have your whole group pitch in. It’s also important to note that you don’t necessarily need those supplements, since you can add them in manually if you want. For instance, instead of having all monsters at the ready, you can quickly add them manually in if you already have the necessary books. However, as stated before, having all of the references in the program is a lifesaver and I can’t recommend it enough.

If you have a group of friends who are on the fence about Dungeons & Dragons (and other pen-and-paper-RPGs, since Fantasy Grounds supports quite a few of them), it might be worth your time to divide the cost and pick up an ultimate license. For one person, it can be cost-prohibitive, but the experience of both prepping and running games is much better now that I have Fantasy Grounds. Considering the fun my group and I have had with roleplaying, it’s definitely worth everyone chipping in the equivalent of a new game.