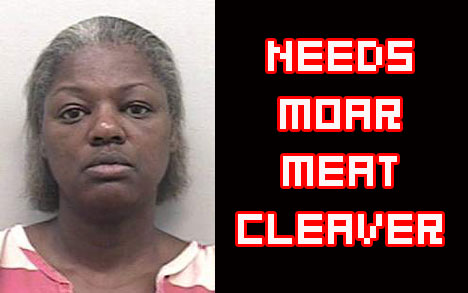 Sure, we know kids get crazy when they get separated from their videogames, but Chamborg Hecht may be on a whole new level of madness (no doubt inherited). According to Ocala.com, Chamborg’s mother Brenda was having problems with Chamborg playing games too often. He hadn’t worked in four months and just slept all day, and when she came home from work at night he was up playing videogames.

I’m not sure that sounds so strange, as I think I might have done something kind of similar when I was a teenager, but for Brenda it didn’t fly. To try to encourage her son to get a job, she confiscated his Xbox and PSP, only to find she was rewarded for her well-meaning efforts with a cockroach in her bed — put there by Chamborg. When that failed, he stood naked in front of her to try to get her attention.

I’m sure you think this story is odd enough already, but it gets worse — Chamborg arrived at Munroe Regional Medical Center this week with lacerations on his forehead and bite marks on his chest and arm. Apparently the mother and son fought in the bathroom and Brenda grabbed a meat cleaver and hit him in the head with it, then bit him, threatening to slice off his head, fingers, and genitals. In her words:

“I popped him in the head with the wrong thing. It was just there. I didn’t try to kill my son.”

You keep a meat cleaver in the bathroom, Brenda? That’s … distressing.

She has been charged with attempted murder, which ought to give Chamborg lots of time of play videogames if she is indeed sentenced. The irony. Of course, this is more a story of a dysfunctional family than the horrors of videogames, but it still stands as a lesson — don’t piss off your mother, or she might try to chop off your junk with a meat cleaver.