There is something uniquely terrible about disgusting food. The taste never seems to go away, no matter how much you wash your mouth out, and your body behaves, at least for a moment, as if it’s been poisoned. Anyone who’s accidentally taken a swig from a carton of expired milk will know the feeling. (Nope, never done that, not me…scruffy bastards, the lot of you.)

If a horror game wants to shock the player, it can create that feeling on many levels, whether through jump-scares or disturbing stills. Rotten food can be used to create an unsettling atmosphere that disturbs rather than shocks, creating a longer-lasting scare. On the other hand, plenty of games use crappy food to appeal to toilet humour sensibilities. Others simply allow you to create monstrosities for your own entertainment, then feed them to unknowing NPCs for literal shits and giggles.

So, let’s tuck into some pretty damn awful meals in video games. Perhaps scoff down your afternoon snack now, or leave it ’til later, depending on how strong your gag reflex is. 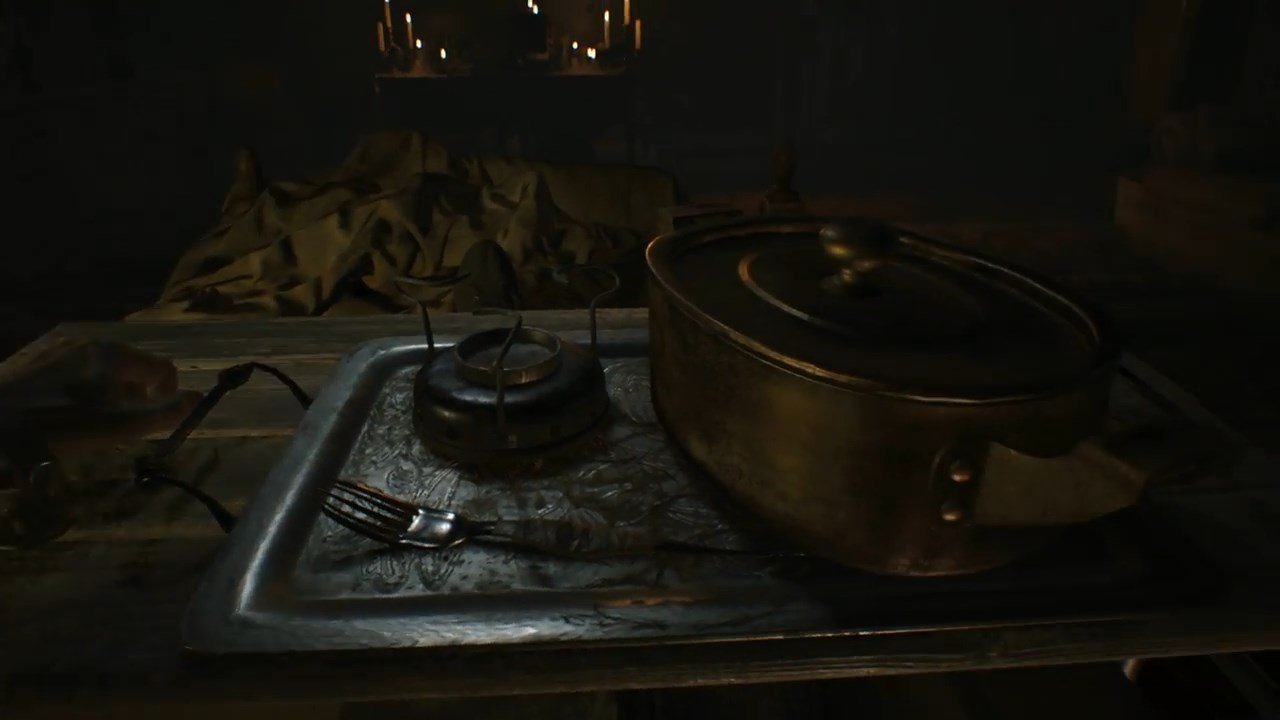 Time for a bit of backstory as to why I even decided to write this piece in the first place (yes, yes, I know, my writing style is as rambly as a Ronnie Corbett skit, but you’ll get used to it). A few days ago, I ordered what I thought was a nice, fresh spinach salad while out for lunch with a few coworkers and was repulsed to the point of my eyes nearly popping out of my head when a salad covered in chicken breast was placed before me. I had misread the menu. Why was this a problem? Well, I’ve been vegetarian for years. Being terminally British and too polite to badger the waiter about something that was 100% my fault, I battled through the heap of foliage and dead chicken, separating out the carcass, though I could still taste the lingering death stench that had seeped into the greens.

The first thing that came to mind when that plate was plonked down in front of me was Ethan waking up, strapped to a chair and being force-fed unidentified entrails. I think we can all identify with that very childlike feeling of being strongly encouraged to eat something we don’t want to eat, whether it’s being encouraged to try liver or tripe, or even something as benign as broccoli. It appeals, as I said above, to a fear within us of being poisoned. Being poisoned is a particularly slow and painful death; also, taste-testers have existed since time immemorial, it is such a beloved way of seeking revenge on your foes.

It does not help one jot that Jack threatens to ram a knife into your face if you don’t eat Marguerite’s grub (not her grubs, praise the Lord). Jack and Marguerite’s insistence that you “accept Eveline’s gift” is way too similar to that loving but misguided great-aunt who gets offended if you don’t reach for a third helping of bland sponge cake. It adds to the cult-like feel of Resident Evil 7, which is very clearly inspired by The Texas Chainsaw Massacre. 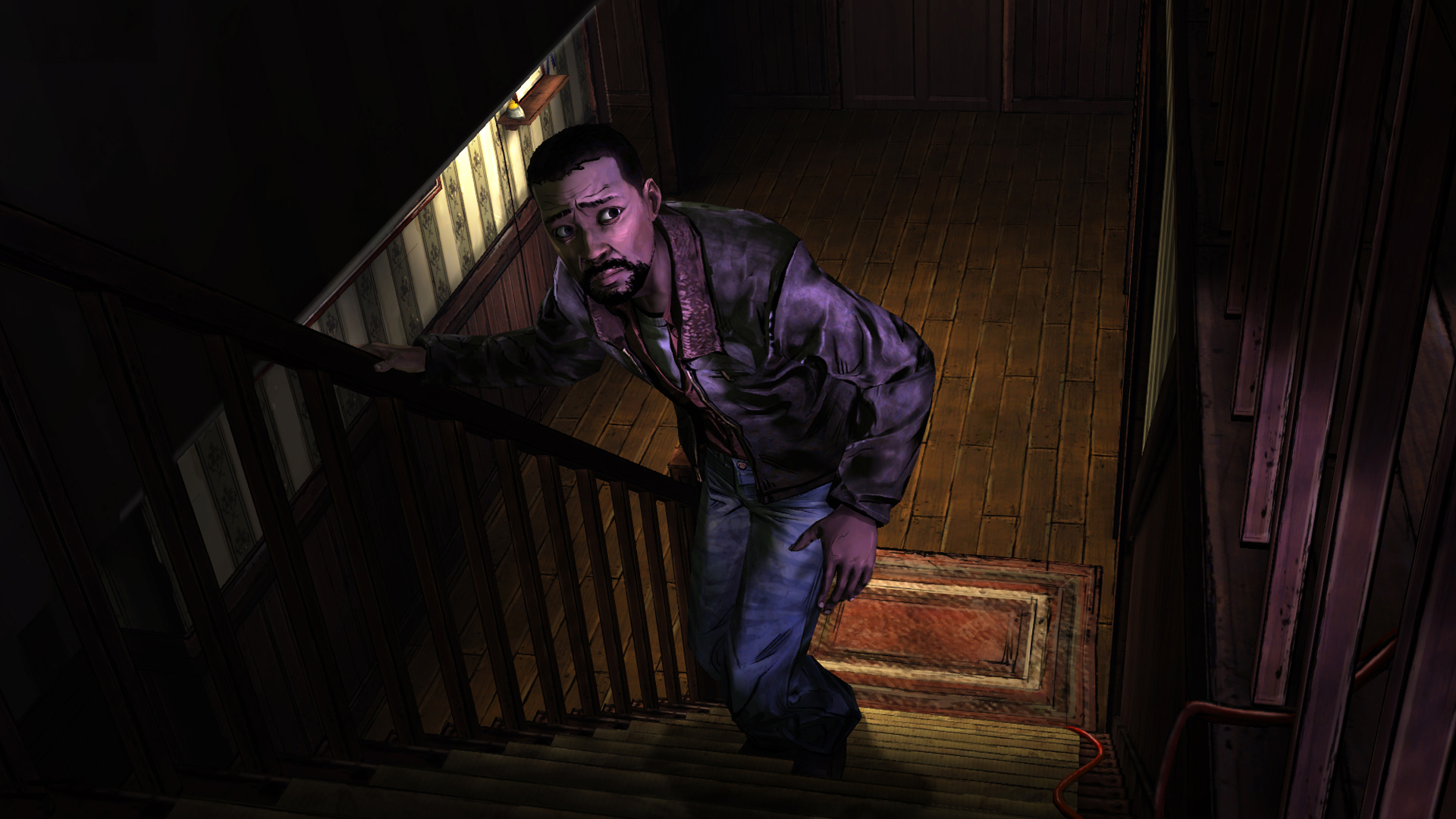 Being eaten alive must rank up there with drowning and burning to death as one of the most awful ways to go. I think this is why I’ve always been particularly sensitive to zombie-themed games, and have only just started overcoming my fear by slowing playing through a few Resident Evil games on my own. What the St Johns do is a form of human butchery, rather than eating straight from the corpse, so maybe their practices are actually less cruel? Though not by much.

The St Johns seem at first glance to be a family who have made ranch life post-apocalypse work for them. They’re living from the land, and will probably outlast the walkers due to their self-sufficience. Except it’s all a veneer and they actually lure people to their farm, slaughter them, and then eat the meat carved straight from their bones.

When Lee has his Soylent Green moment and bursts in on the entire crew, with children in tow, about to feast on the legs of their half-dead friend, a real sense of panic sets in. It’s so inhuman – so contrary to what most species in the animal kingdom do to preserve themselves – to eat your own. In fact, games such as Dead Island have touched on the real-life disease of kuru, a terminal brain condition caused by post-mortem rituals in New Guinea of eating parts of the dead.

Though what scared me the most was that the St Johns somehow thought they were superior to the walkers outside. Actually, they were inferior to the walkers, because they knew exactly what they were doing and were willing to indoctrinate small children into their cannibal way of life through trickery. I could be charitable and say the family had been driven mad by the end-times, but their behaviour stemmed from extreme selfishness/unchecked self-preservation. I was not sorry to see their demise.

3. One too many backstreet slaughterhouses, Sleeping Dogs 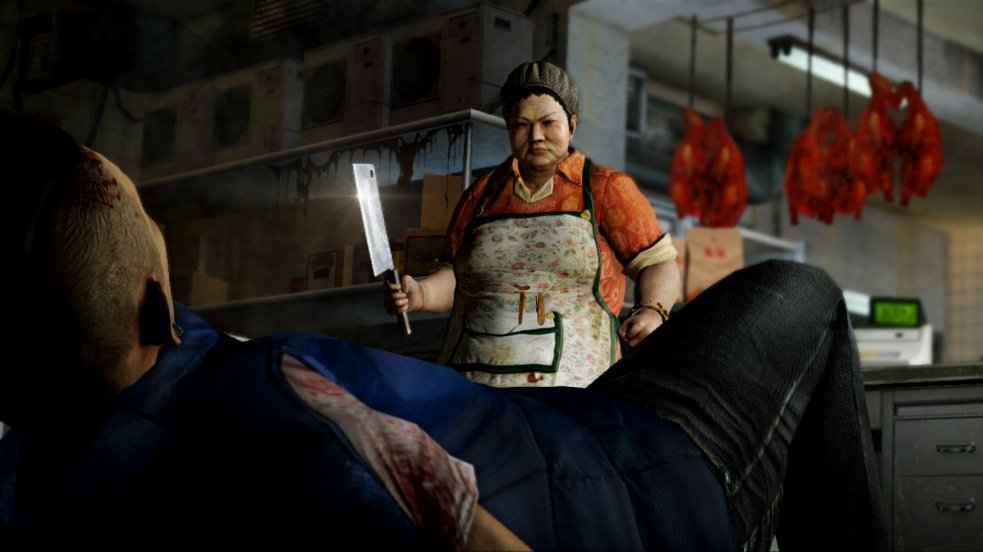 I don’t think this is just because I stick to a meat-free diet: I have always hated slaughterhouse scenes in any film, game or other form of media. Seeing meat hung up on hooks just revolts me, because I feel like I’m seeing decay happen in slow motion before my very eyes.

Sleeping Dogs is a game that uses a slaughterhouse/butcher shop to imply that the family running it as a front would not hesitate to cut you up into tiny pieces if you get on their bad side. For me, it creates a sense of disgust as well as a sense of fear. This is perhaps not helped by the knowledge that Hong Kong has a very humid climate, and some of the meat is not stored in obviously refrigerated spaces, so you can just imagine how bad that would smell in the height of summer. On the other hand, racing through the abattoir freezer space as Norman Jayden in Heavy Rain sent shivers up my spine for different reasons – imagining Normie slipping on the icy ground and cracking his head open on a side of beef – so you generally can’t win when it comes to me and meat storage in games. Sorry, devs. 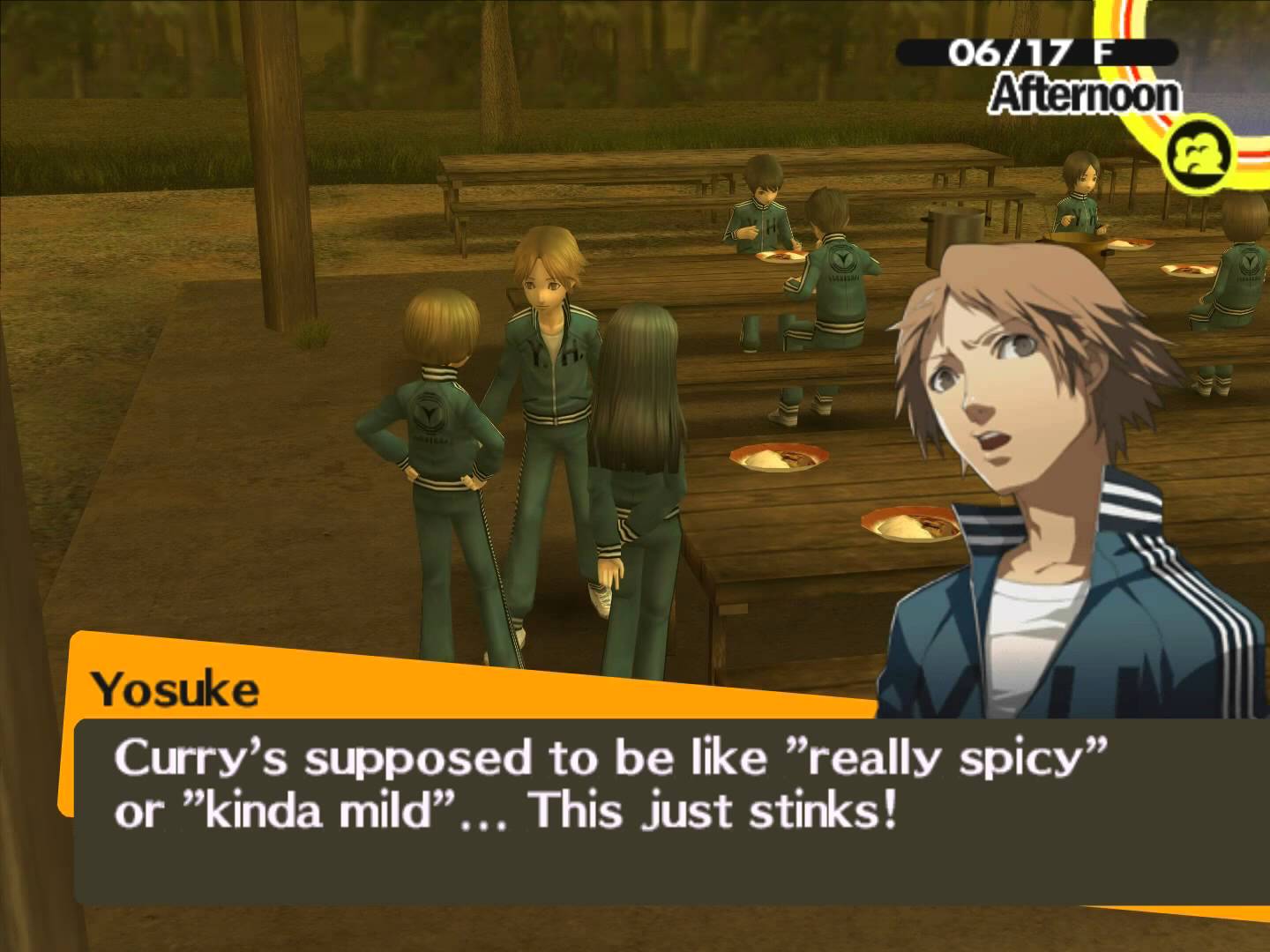 This is one entry that doesn’t actually look bad on screen; instead, you are just told that it is bad. Very, very bad. Would-rather-go-nil-by-mouth-for-an-entire-camping-trip bad.

“Mystery Food X” is the terrible curry concoction that Yukiko and Chie serve up on a class trip and on other occasions. They appeared to have no preconceptions at all as to what belongs in a curry, so in go bizarre ingredients such as foie gras and sea cucumber. It brings back memories of when my dad cooked dinner for us, long before he learnt the ways of Gordon Ramsay and Jamie Oliver and actually became a brilliant chef. I recall Saturday night dinners of corned beef and potato casserole atrocities that howled of unfettered stank and hoping nobody would notice if I pushed it around with my fork a bit.

The cool thing about Mystery Food X is that it pervades other games. I played Psycho-Pass: Mandatory Happiness yesterday, and there was a scene in which the Inspectors and Enforcers cook a mass meal for a bunch of refugees. Given that the food in Psycho-Pass is a lot different to how it looks in modern-day real life, with a lot of futuristic replacements for bog-standard ingredients, I fully expected the oat-biscuit curry they made to be vile as all heck. But apparently, it was delicious. So, yeah. Thanks Shin Megami Tensei. Now I am suspicious of curry. Which, again, as a British person, is a pretty big problem. 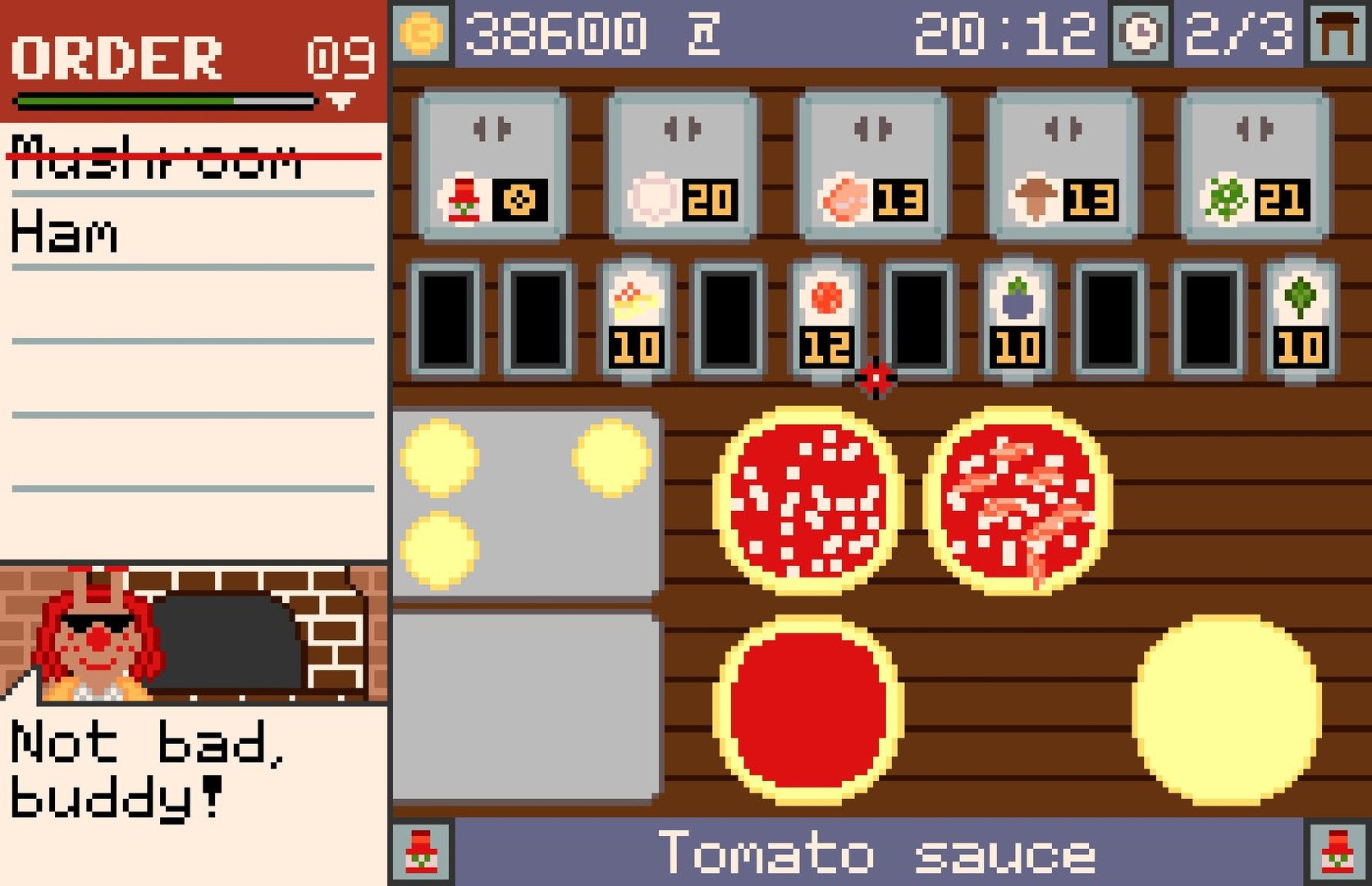 I love Pizza Express, alongside a variety of other cooking sim/management games. It’s a pretty cool pizza restaurant sim, allowing you to put together your own pizza pies, control the prices, manage ingredient inventories and decorate your shop. This takes place against a story of intrigue and business poaching, though I didn’t pay that much attention to the storyline. I was too busy dreaming up the most fantastical slices I could and gouging customers for the privilege of tasting a sliver.

You have to be careful, though, since Pizza Express gives you plenty of room to knock out beastly pizzas that would play all sorts of havoc with your gastrointestinal system. Stinky Swiss cheese with a pesto base is one I remember strongly, as well as a heavy cream base with prawns. Yack. Each to their own, but I don’t want a pizza that will stink up my fridge when I stow it away for leftovers, or that might curdle overnight. Eww.

Which games are memorable for you, thanks to their disgusting food? What is your very own food nightmare that you stumbled upon in a game? Let me know in the comments down below!