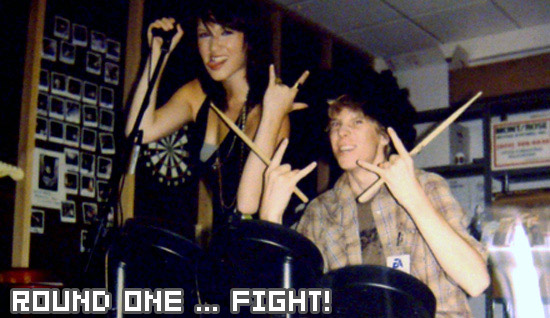 Game Informer has a video (right click, save link as) showing the song “Reptilia” being played in both Rock Band and Guitar Hero III: Legends of Rock. This comparison offers a quick look at how the two games look head to head.

Other than the obvious fact that the notes are shaped differently, the first thing you’ll probably notice is that the note charts (for this song anyway) are fairly similar. While I haven’t had the opportunity to play either game yet, it sounds like Guitar Hero III will be the more challenging of the two as far as guitar play is concerned.

I’m not entirely sure how useful this video will be in helping you to decide which game to get, but it’s still interesting to watch nonetheless. I guess it really comes down to which track list you prefer and if you would rather play alone or with friends.

[Via NeoGAF, thanks Donut!]