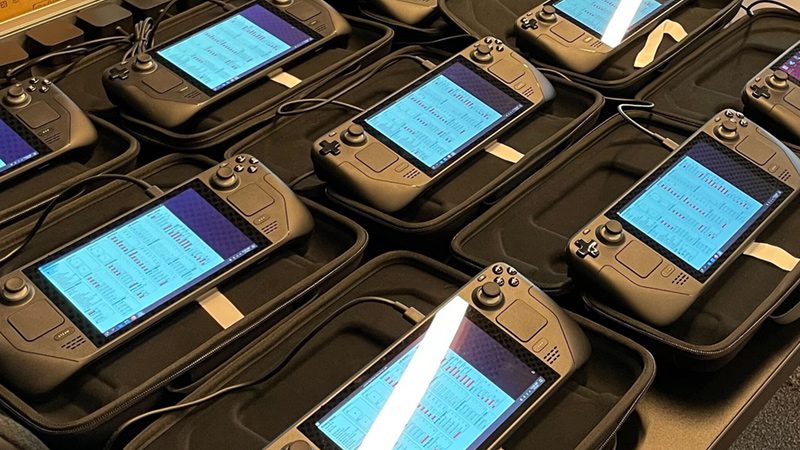 Even more developer kits are going out

There’s no such thing as too much communication when it comes to sought-after new video game hardware launches in The Current Times. So while today’s update from Valve is pretty light on exciting new information, it’s honestly nice to hear that the handheld Steam Deck systems are, as the company puts it, “on track.” One step at a time.

In a January Update posted today, the company said it was “firing on all cylinders” after the holiday break, and things are looking (relatively) stable. More Steam Deck developer kits are going out — for reference, “hundreds” of the beefy bad boys were shipped in the last month — in order to help facilitate the Steam Deck Verified compatibility program.

From the outside looking in at least, Valve has been pretty good about getting Decks in devs’ hands and letting them show off the results. Here’s a recent-ish demonstration from Thirsty Suitors, a skateboarding adventure game with RPG battles and cooking and dating and… gosh, Steam Deck or no Steam Deck, this looks sweet.

PC version of Thirsty Suitors on Steam Deck. It just worked without any work and feels good on it. I’m impressed with the hardware. pic.twitter.com/THNmyKOa2M

So where does that put folks with a Steam Deck reservation? While shipping estimates will vary from person to person depending on when they got in (you can check your ETA here), the first wave should be arriving next month. The latest word: “Global pandemic, supply issues, and shipping issues notwithstanding, it looks like we’ll be able to start getting these out the door by the end of February.” (A nerve-wracking caveat, to be sure)

February is going to be a bonkers month for video games no matter what — but hopefully, some of you will get to fire up a bunch of your PC games on your Steam Deck and bask in that “shiny new tech” glow. Those first moments are going to feel special.

My hardware-that-I-want-but-don’t-strictly-need budget blew up last year thanks to a certain retro enthusiast company — reminder, the Steam Deck starts at $399 on the low end and can be as much as $649 for the high-end 512GB NVMe SSD model with anti-glare glass — but I’m happy for y’all. What’re you gonna play first? Wrong answers only.