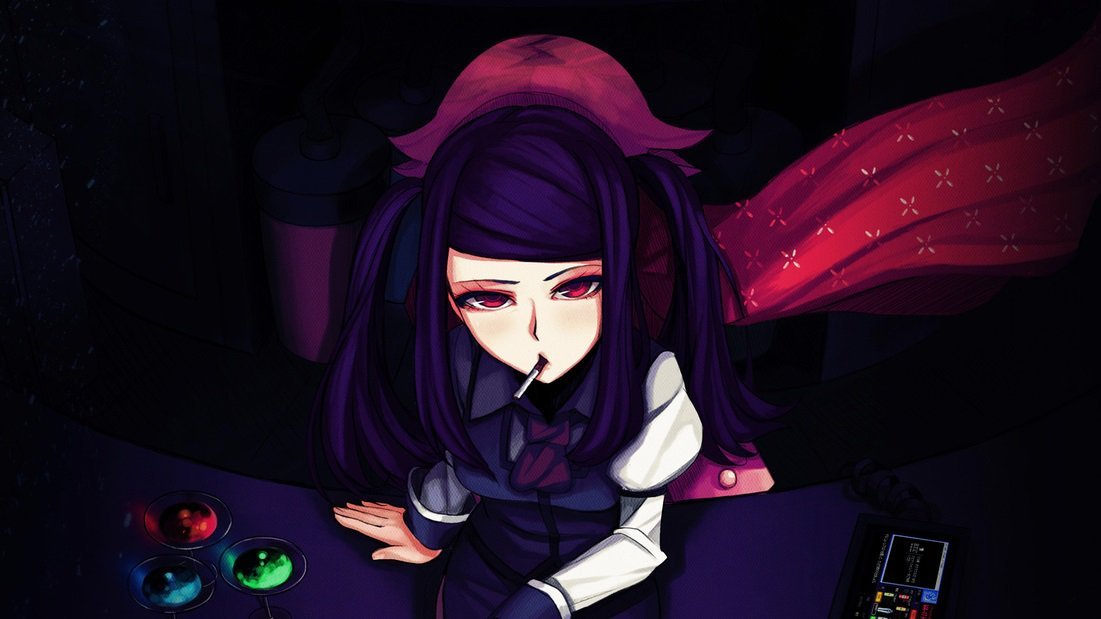 With the recent cinema release of Blade Runner 2049, as well as a handful of Blade Runner shorts on YouTube, I don’t really need to tell you that there is a sense of dread surrounding “Replicants” and enhanced humans. It’s not just a problem with how strong, fast or intelligent these creations are – they manage to bring out the worst in humans, because some humans can switch off their conscience when it comes to artificial life.

A game which explores this issue from a different angle is the brilliant VA-11 Hall-A: Cyberpunk Bartender Action, which is available on Steam (a Vita version is in the works). It takes place in Glitch City in the year 207X, after humans have been infected with nanomachines to keep track of the population. Some people use technological developments to their advantage, enhancing themselves to become more agile, stronger or more suited to their jobs. Others suffer from nanomachine rejection, with the atmosphere slowly killing them. Lilim (humanoid robots) are used in the entertainment and sex industries. By playing as a human bartender, Jill, the player gets to see into how nanomachine infection and the integration of cyborgs into society have changed human behaviour. And these changes are largely for the worse. 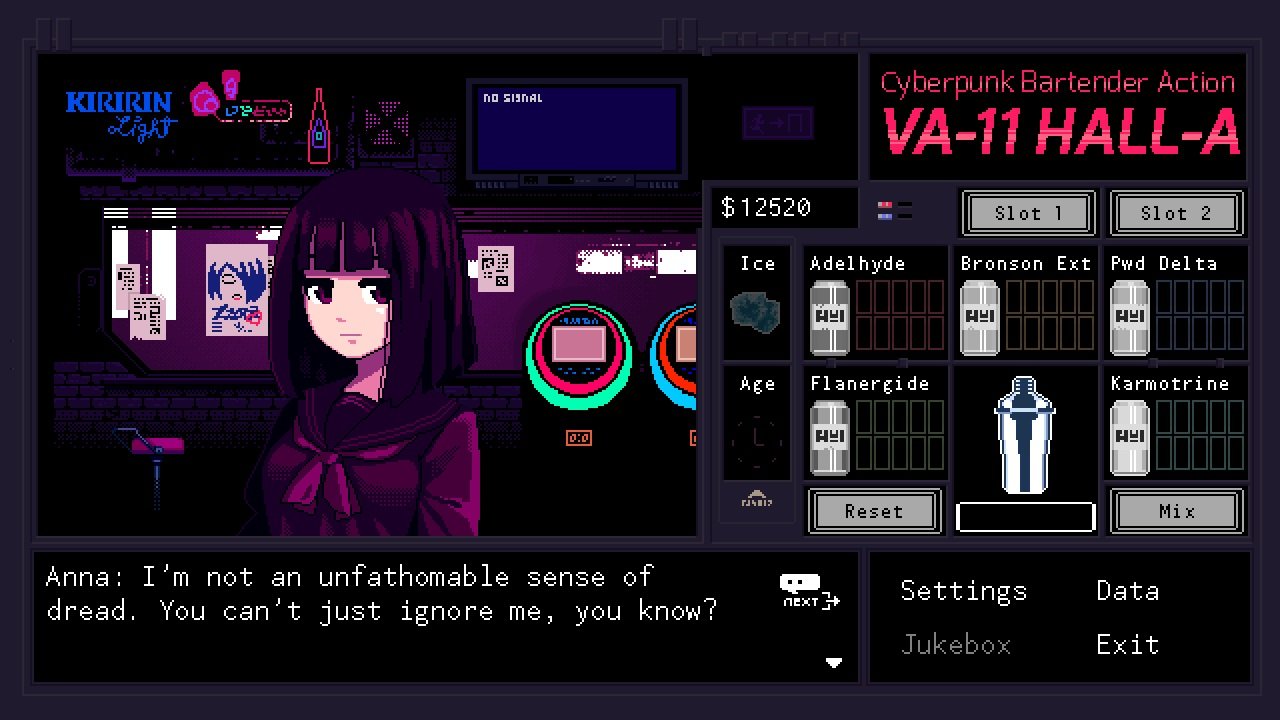 Impact on the human moral compass

We, as humans, seem to have more-or-less clear guidelines on how to treat one another, at least on the surface. We have treaties and regulations to safeguard human rights, and we are taught as children to be friendly and kind towards others. In particular areas of society and towards certain groups of people, humanity has sadly developed blind spots.

This blind spot applies when it comes to artificial lifeforms. When a being isn’t human, even though they appear human and act like a human, we might think we shouldn’t put the effort into treating them with this kindness. They can’t feel emotions and don’t have empathy, so why bother, right? Robots don’t know the difference.

This attitude is very clearly portrayed in VA-11 Hall-A, particularly when it comes to Dorothy, the lilim who frequents Jill’s worker in-between shifts as a sex worker. One of the most shocking moments in the game is a conversation between Jill and Dorothy, where Dorothy confesses that she doesn’t upgrade her frame to an older-looking model (Dorothy looks about 13 years old, but has the mental age of a 24 year-old human) because a younger model is exactly what her clientele wants. The boundaries of law and human decency seem to stop when it comes to Dorothy, or lilims on the whole. Another example is the relentless harassment faced by the popstar lilim *Kira*Miki.

The lilims you encounter are not all that different from the humans, particularly because humans have chosen to enhance themselves with metal parts, too. Lilim talk about relationships (human-lilim relationships are the norm), get drunk and appear to feel emotions just like humans. The only thing that separates human and lilim is flesh and bone, and even then, some humans don’t have much flesh or bone left, thanks to all their upgrades. 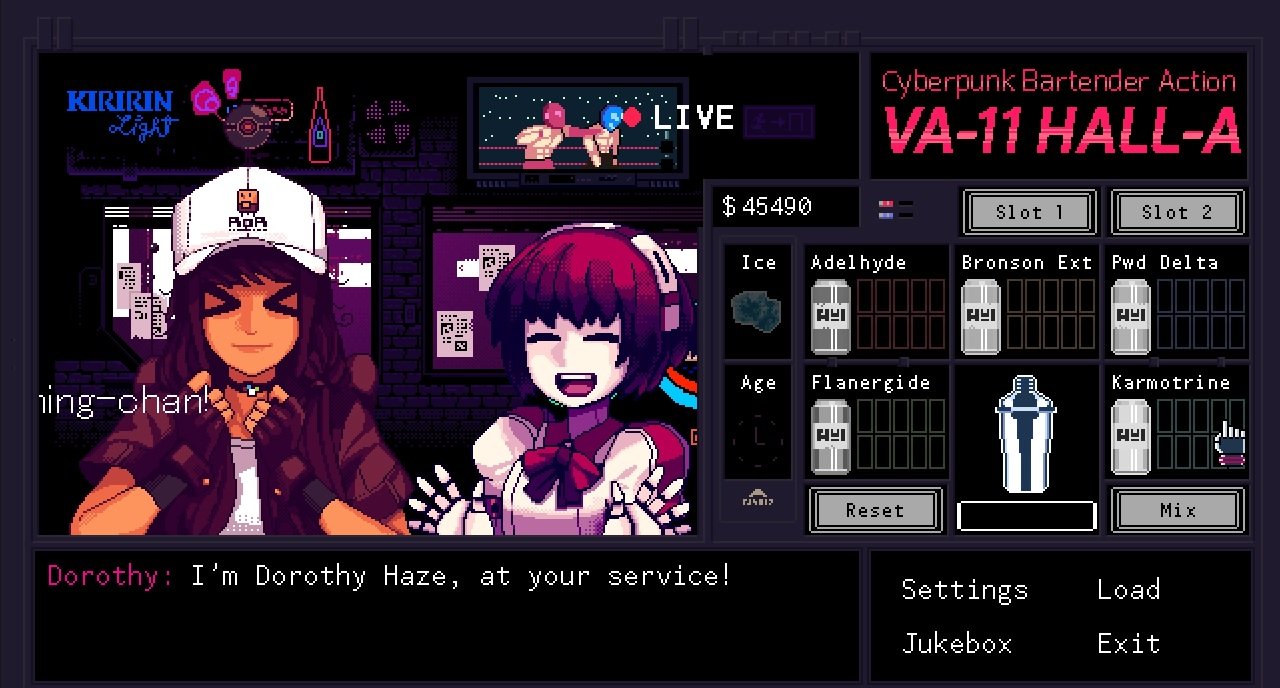 While you don’t need nanomachines for an autocratic government and loss of personal freedoms, it certainly helps. The government of Glitchy City became emboldened, and no longer recognised personal boundaries, regulating everything for its own benefit. The effect could be felt by everyone, including tenants and small business owners.

As you play the game, you have to make sure Jill can pay her rent and electricity bills every month. Her apartment is tiny and she appears to survive on ramen and cigarettes, so the crippling bills, combined with other dialogue in the game, suggest that there is no room for social housing or rent/utilities control in Glitch City.

The bar where Jill works serves government-authorised drinks, made with five base ingredients. Putting together these cocktails feels more like a chemistry expert than drinks-mixing, since the ingredients have names such as “karmotrine” and “adelhyde”. You can serve bottled drinks, but they are limited, mediocre in taste and expensive. Martinis used to be served at the bar, but the government forced a name-change to ensure consistent branding. You get the sense that the bar where Jill works is special, because it has managed to hold onto some personality in spite of all this meddling. 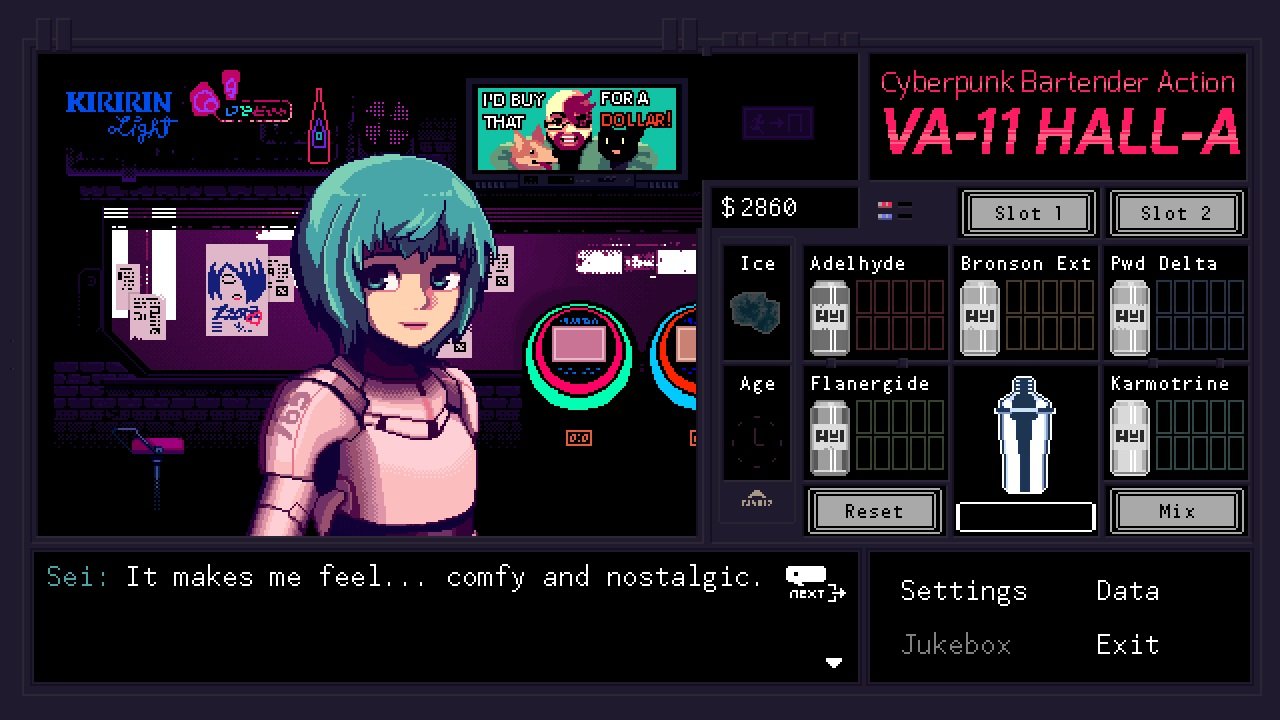 Most dangerous of all: apathy

VA-11 Hall-A presents the issue of artificial and enhanced humans as a complicated one, resulting in new possibilities but also in widespread hardship. It underscores the apathy and casual acceptance that some people in Glitch City feel towards excessive surveillance and civil unrest, and this feels like the most dangerous aspect of the whole story.

Jill talks of people simply “giving up” when faced with crushing difficulties in day-to-day life. Many people have become chronically and terminally ill from allergies to the nanomachines in the air, and the government makes it near impossible to survive as a minimum-wage worker.

While violent protests are covered in the game, the game’s atmosphere is very oppressive. This is because there is an underlying feeling among the residents of Glitch City that nothing will change.

Furthermore, getting enhancements as a human is considered common sense, and is as normal as getting contact lenses. Alma, one of the patrons at the bar, is a professional hacker who upgrades her hands, to avoid getting carpal tunnel syndrome. She sees it as a no-brainer to “upgrade herself”, even though it involved having body parts amputated.

Everything in Glitch City is upgradable, replaceable and, crucially, disposable. When I played the game, I found it upsetting to confront how disposable I really am, and I don’t think I’d see the world the same way if I had to witness this fact in real life multiple times every day. It grinds down all of the humans in VA-11 Hall-A, in one way or another. 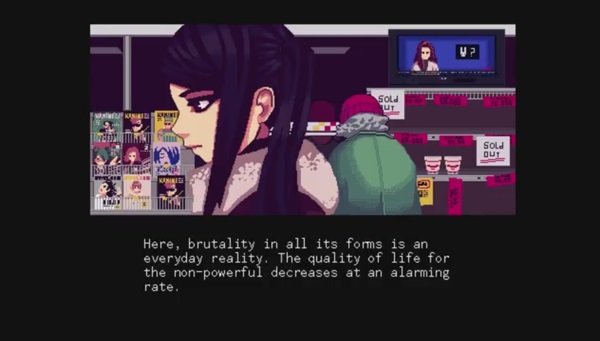 With the revival of the Blade Runner franchise and what you’ve just read about VA-11 Hall-A, it’s easy to believe that artificial equals bad. But I don’t think that VA-11 Hall-A is saying that artificial life is inherently bad, and it has much more to say about the humans making use of this technology, rather than the technology itself. The question is whether us humans can be trusted to use it. Maybe humanity will always use it to circumvent morals and the law. But maybe, just maybe, we could use it to make our lives better. We just have to keep our eyes open for misuse.

You can follow Sukeban Games’ Twitter page for updates on the Vita version of VA-11 Hall-A, and you can buy the game’s phenomenal soundtrack here.

Did you enjoy VA-11 Hall-A? Are you scared of the idea of artificial life/artificially enhanced humans? Share your thoughts in the comments down below!