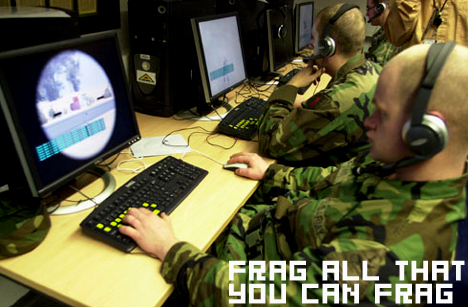 The United States Army has announced that they will be putting a large chunk of change into gaming. Having created a new “games unit,” they will spend $50 million training soldiers on videogames over five years, starting in 2010.

The Army has been using a modified version of Operation: Flashpoint (called DARWARS Ambush!) for years now as a training tool, but has found it limiting in terms of number of players, map size and customization of scenarios. Their next generation of videogame training, called Game After Ambush, will come with an assortment of modding tools which will allow trainers to make changes to the game during play as well as create custom situations for soldiers to practice on.

Just as with DARWARS Ambush! before it, this new program will be based on a commercial product. There is no word yet as to what game or which developer is being used but an announcement is expected in the next couple of weeks.

In addition to the already sizeable funding, they are also spending an undisclosed amount on “state-of-the-art gaming consoles” which will be put into field operation as early as February of 2009.