Mushroom 11 caught our eyes about a month ago, with its unique puzzle gameplay hook: the globular green collection of fungal cells is not directly controlled by the player. Instead, players simply click or tap to “erase” cells, while the mushroom has the curious capability to regrow a new cell for every destroyed cell.

It is one of those ideas that seems so elegant that it is surprising nobody had ever thought of it before. With that core mechanic applied to physics and engineering puzzles, Mushroom 11 is shaping up to be one to watch closely. 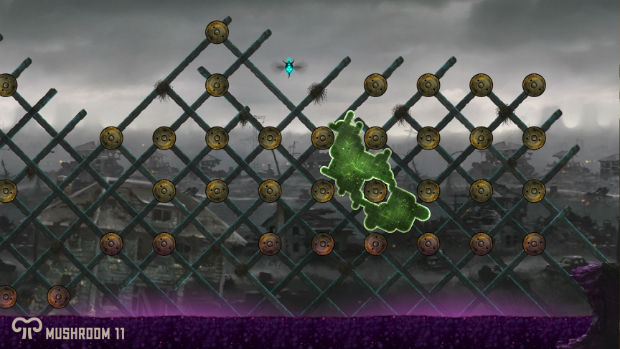 Dropping into the game, the wordless tutorial shows basic handling of the amorphous blob. Moving it is not as simple as pressing in the intended direction. In order to move left, the player must destroy cells on the right.

Since the cells regenerate along any open cell surface, some will sprout upward rather than opposite the cursor, so simply trying to “push” the blob will result in it cutting in the middle and not moving very far. Instead, players must sweep the cursor to keep its growth in check.

It sounds complicated, but once the basic rules of cell destruction and regeneration are understood, simple movement becomes second nature. Soon, players are zooming through tunnels and climbing up walls.

Once that happens, the blob finds itself in various sticky situations, ranging from puzzles to more action-focused endeavors. One sequence has the blob rushing to escape a series of buildings sinking into lava, and it can be pretty tense when it comes down to the wire.

Puzzles appear to comprise a greater portion of the game, and the lead developer of Untame Itay Keren was paying close attention to how new players approached the problems he set out. His design philosophy is such that he wants to avoid puzzles that can be solved with brute force. He spoke with glee about most of his observations, while also noting the puzzles that need a bit of work. 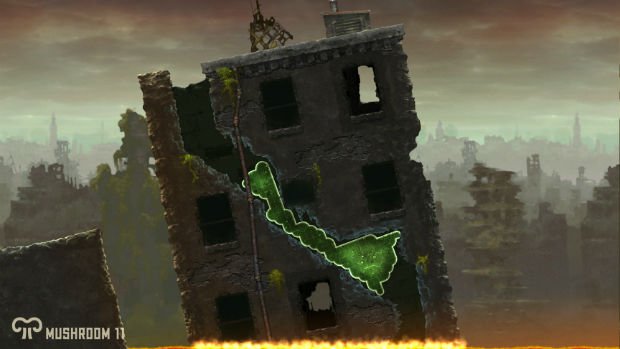 One clever puzzle requires the player to split the blob up and manipulate two separate entities before erasing one entirely. It teaches that capability elegantly, and sets the player up for more advanced maneuvers.

Somewhat unexpectedly, a short while into the demo there is a boss fight, requiring the player to use his climbing and dodging abilities to absorb and defeat another nightmare organism.

All of the different parts come together fairly well, and they are all tied to the central destruction/regeneration mechanic. Keren seems to be full of ideas to implement, and while they may not all work in the end, Mushroom 11 looks like it will have some truly new and interesting gameplay.