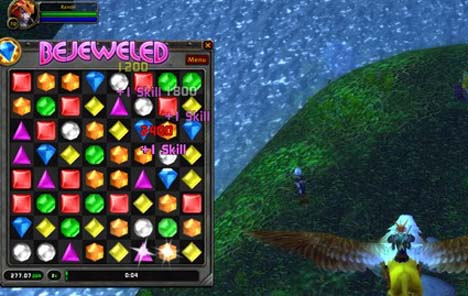 One of the first signs of the end times is now official as two of the most popular games ever are working in tandem with each other to erase your existence from this planet.

If you’re a World of Warcraft player, chances are that you’re already “erased” from the planet, and the official addition of PopCap’s Bejeweled to WoW isn’t going to bring you back.

Before this, a clone called Besharded was being played in WoW to pass the lonely times. PopCap asked its creator, Michael Fromwiller, to create an official version for them. The add-on will be free of charge, according to Gamasutra.  It will have a customizable user interface, a persistient score table and even its own “tradeskill.”

Filed under... #Casual Gaming#World of Warcraft