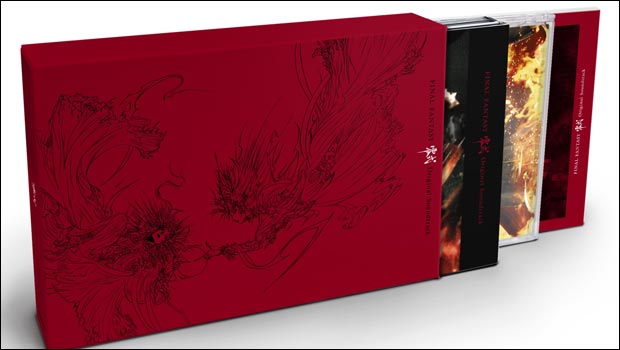 While Final Fantasy Type-0 (‘Reishiki’ in Japan) still doesn’t have an international release date, the game’s due out next week in Japan.  Alongside the game’s release, Square Enix is also publishing two versions of the game’s soundtrack: a standard edition in a normal jewel case and a limited edition housed in a special box that is featured in the above unboxing video.  The limited edition soundtrack is included with the collector’s edition of the game, but can also be purchased separately for 3,800 Yen compared to the standard’s 3,300 Yen.

Type-0’s soundtrack is being composed by in-house composer Takeharu Ishimoto, who fans may know from his work on Crisis Core, The World Ends With You, and Dissidia Final Fantasy.  A preview album titled Final Fantasy Type-0 Music Collection -First Campaign- showed off Ishimoto’s epic orchestral score, bits of the Final Fantasy “Prelude,” and some grungy alternative rock tracks similar in style to Crisis Core.

The soundtrack and game are out on October 27, so let us know what you think of the lack of an international release date and of the above limited edition soundtrack packaging!