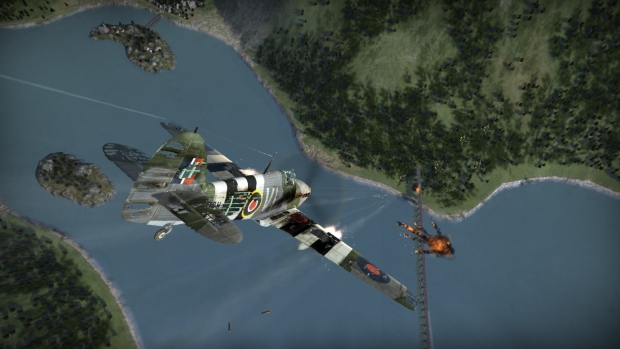 Ubisoft has announced that they’ll be publishing Heroes Over Europe, the sequel to 2005’s Heroes of the Pacific. Heroes Over Europe was originally supposed to be out by now from Atari, but that obviously isn’t happening anymore. This is just more proof that Atari seems to be leaving the retail market in favor of the digital market.

As for Heroes Over Europe, I actually previewed the game last December. It was an enjoyable experience and the 16-player dog fights look like they’ll be a blast. My only issue with the game is that it’s set in World War II. I really want to see more modern day or future based flight games. Hell, I’m going to be previewing ANOTHER World War II flight game this coming Monday. Give me a break!

Heroes Over Europe will be out this September and you can get more info on it over at the brand new Web site for the game.

Today Ubisoft announced it will be publishing Heroes Over Europe, a flight combat game designed for the Xbox 360® video game and entertainment system from Microsoft, the PLAYSTATION®3 computer entertainment system, and Windows-based PC. The sequel to Heroes of the Pacific, the World War II flight combat game, Heroes Over Europe builds on the game’s impressive legacy with intense dogfights, a highly detailed realistic visual presentation and even more online options.

“We are pleased to be bringing Heroes Over Europe to retailers worldwide,” said Tony Key, senior vice president of sales and marketing, Ubisoft. “The action-packed gameplay and realistic imagery in Heroes Over Europe will help bring some of history’s most exciting air battles to life for an experience that gamers will enjoy.”

Developed by Transmission Games in Melbourne, Australia, and powered by an all-new engine, Heroes Over Europe is set to raise the bar for flight combat games with the all new “Ace Kill” close combat action, four online modes supporting up to 16 players and fully customizable aircrafts with localized damage. Visually, the game takes no prisoners with meticulously rendered environments including faithful recreations of London, Berlin and the French Alps, and ultra-realistic iconic warplanes of the era, all presented in stunning high definition graphics.